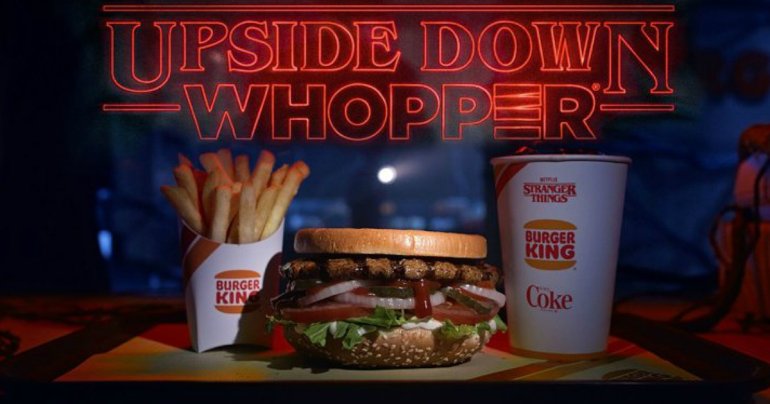 Everyone is getting really excited about the newest season of Stranger Things premiering on Netflix this coming July. Including food companies like Coca Cola who has rolled out a throwback coke and now Burger King who has announced that it will soon sell an “Upside Down” version of the Whopper.

The burger is exactly the same except for it will be served upside down. Which is kind of nuts when you realize that you can literally just flip your burger upside down at any point of time and have the exact same thing. I’m not sure if they are planing to actually make it upside down from start to finish but at least that way the sauce will look like it’s dripping toward the top…bottom. At the very least it will come in a cool box.

Not only will they be selling these burgers but also will have special sauce packets and some stores will sell Stranger Things Merchandise. As you can see the sauce packet is Eleven’s Nose which you can make bleed, with sauce.

Lego, H&M, Schwinn and Baskin-Robbins have also partnered with Netflix to promote season 3 of Stranger Things.

You can slip into the upside down starting July 4th. Are you ready for the darkest adventure yet?