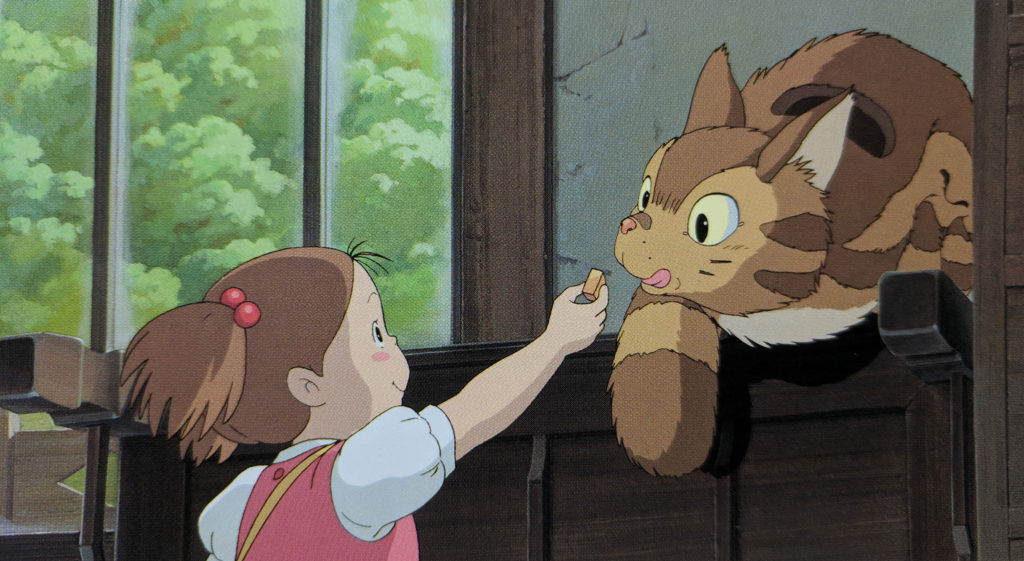 Released in 2003 was a sequel to My Neighbor Totoro that seemingly no one knew about. It is called Mei and the Kittenbus and follows Mei’s adventure with a kitten of the bus that was featured in the first film.

This movie is probably one of the most unknown movies in the Hayao Miyazaki/Studio Ghibli universe. In fact a couple years ago even many Japanese fans were surprised to find out that it existed.

Possibly the reason that Totoro has never been featured in another Ghibli movie is due to the actor that played him dying of heart failure. This was Hitoshi Takagi’s last film where he played Totoro. He died in 2004.

The story that this 13 minute short plays out is this. Mei is a happy girl and her and Sasuke’s mom has been home from the hospital for a while. Mei ventures outside and looks up at the sky while eating a caramel candy. A whirlwind chases her and she runs home trapping it. The whirlwind is the Kittenbus! And boy is it cute!

At first the Kittenbus is scared and tries to escape but after Mei gives him a candy he calms down a bit. He leaves but then comes back in the middle of the night to Mei’s window. He takes her for a ride where Mei see’s the Catbus from the original movie.

She asks Kittenbus “Is that your dad?” and the Kittenbus meows back. He then takes her to the place where all the Catbus come together and drop off a large amount of Totoro like creatures, including Totoro! Mei says hello and gives him a big hug.

She then is able to meet Kittenbus’ grandmother and gives her a caramel. She licks Mei and Mei licks her back. Then they take Mei home and the movie ends.

Currently you can only view it in Japan and even then there are slim odds. Depending on where the Ghibli Museum is on it’s rotation of shorts you may not be able to see it at all. There is a version of it on DailyMotion but it is not great quality as you can see two shadows of people in the front of the person who filmed it. If you are desperate to see it though you can go here.

Really the ultimate way to see this would be a trip to Japan’s Ghibli Museum. Hopefully it will be in rotation when the new theme park opens in 2022 or perhaps it will play at the theme park itself.

All images credited to the Ghibli Museum.