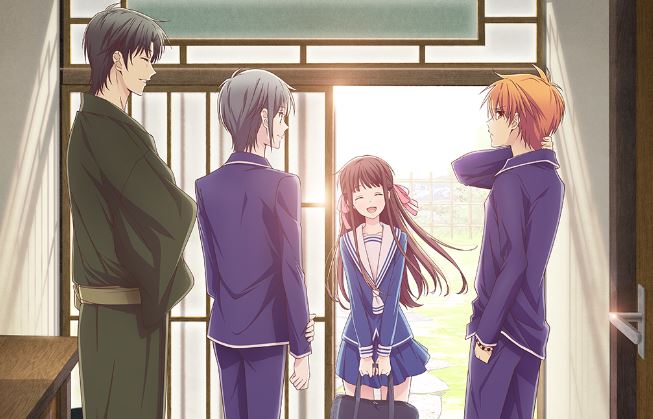 Funimation is going to be presenting the first two episodes of the Fruits Basket Remake in theaters on March 26 (English dub) & March 27 (English subtitles). Advance tickets are now available fromfunimationfilms.com/movie/fruitsbasket.

Guests will enjoy the first two full episodes of “Fruits Basket” before the series’ scheduled television debut in Japan in April. Each ticketholder will receive an exclusive gift pack that includes a commemorative “Fruits Basket” 16 oz stadium cup, branded lanyard and set of three pinback badgers featuring the characters Yuki, Kyo and Tohru.

Run-time, including special interview footage with Japanese and English voice actors, is 85 minutes.

The synopsis for those of you who are just now getting into the series is as follows:

Tohru Honda thought her life was headed for misfortune when a family tragedy left her living in a tent. When her small home is discovered by the mysterious Soma clan, she suddenly finds herself living with Yuki, Kyo, and Shigure Soma. But she quickly learns their family has a bizarre secret of their own: when hugged by the opposite sex, they turn into the animals of the Zodiac!

Funimation has done a spectacular job of not only bringing in the original voice actors for some of the current cast but also selecting the perfect fit for those who have been newly cast to the series. The dub for this is sure to hold up to the original series and move us along further to the end of the story. The episodes that will be shown are only the first two on a journey to the finish line. Something that has never been depicted in the anime because the original run stopped midway through the manga.

Make sure you reserve your tickets soon because you can be sure these will sell out! You won’t want to miss this momentous occasion!