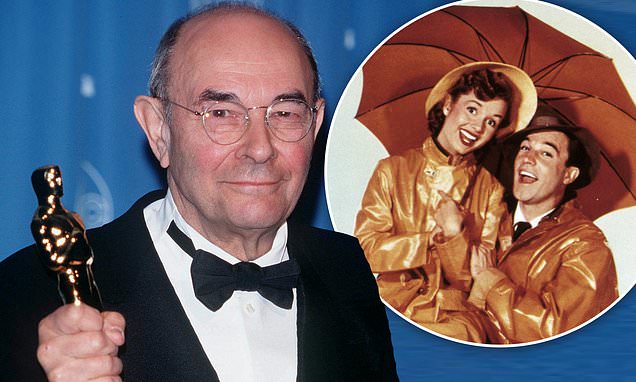 Stanely Donen, director of “Singing in the Rain,” dead at 94

Stanley Donen, a notable director of iconic movies from Hollywood’s golden age, passed away on February 21 at age 94.  He was a director and choreographer for Broadway shows and Hollywood films. Although films he directed included thrillers and romantic comedies, musicals were his forte and he was called “the master of the musical.” He is credited with transitioning Hollywood musical films to an art form where the songs were a more natural continuation of the story. He has 3 films on the American Film Institute’s list of 25 Greatest Movie Musicals, including the #1.

Donen started his career as a dancer in Broadway musicals at age 16; he met Gene Kelly in 1940 when they both appeared in Pal Joey – Donen in the chorus and Kelly as the star. He moved to Hollywood in 1942 and was hired as a dancer by MGM. He appeared in and helped choreograph the movie version of Best Foot Forward in 1943. Kelly would later credit Donen with the ideas for both the “dancing with his own reflection” sequence in Cover Girl (1944) and the “dancing with Jerry The Mouse” sequence in Anchors Aweigh (1945). The duo went on to co-direct On the Town (1949), Singing in the Rain (1952), and It’s Always Fair Weather (1955)

As a solo director some of Donen’s other noteworthy films include Royal Wedding, Seven Brides for Seven Brothers, Funny Face, Indiscreet, Damn Yankees!, Charade, Arabesque, and Two for the Road. He worked with Carey Grant, Gregory Peck, Audrey Hepburn, Sophia Loren, Yul Brynner, Albert Finney, and Ingrid Bergman, among others.

Donen directed the video for Lionel Richie’s “Dancing on the Ceiling” (1986) because he had directed Fred Astaire defying gravity in Royal Wedding (1951).

He was honored in 1998 with an Honorary Academy Award “in appreciation of a body of work marked by grace, elegance, wit and visual innovation;” he had never been nominated for a single Oscar award throughout his astounding career.

He was married 5 times and had 3 sons: Peter, Joshua, and Mark.

A famous quote from him: “For me directing is like having sex: when it’s good, it’s very good; but when it’s bad, it’s still good.”