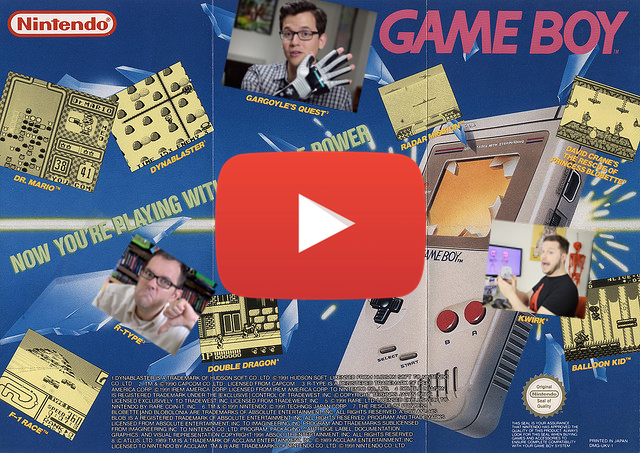 When I first powered on my Compaq Presario back in the 90’s and fired up that blazing 56K dial-up, my high-school mind only had one thing in mind: Video Games!

We were a long way from “let’s plays” and “no-nonsense guides”. Walk-Throughs and cheat pages were just scrolls of text. The internet has always reserved it’s slice of space for our beloved video games! The mystery of consoles, secret codes, release dates, and accessories were all drops in a sea of content being inflated by corporate interests and fluctuating market interest. It was all history.

Most of us still probably have a few old cartridges or CD cases lying around. But for the 3 YouTubers on my list, their obsession and passion for these games not only ignited their quest for knowledge, but cemented them in YouTube history as the curators of our generations convergence with video games!

James Rolfe was just your average ordinary mild-mannered college dude. He grew up in New Jersey, and like many of us, was gifted a Nintendo Entertainment System at a young age. Cementing his love for video games!

But James mild-mannered-ness was about to come to an end. When in college, he decided to crack open a Rolling Rock beer, record himself on video, and upload what we now know him best as: The Angry Video Game Nerd!

James pioneered reviewing video games in a way no one had ever seen. He was Angry. He was a Nerd. But most importantly he was right!

What makes AVGN special is that he taps into the core frustrations of every gamer and perceivable unlocks the rage that is inside us all. Adding to his comedic talents come the true raw talent of being a nerd:

James always balances his palette with the perfect amounts of facts and knowledge about the games origins, programming, and glitches. The best example of this was his video on the Legend of Zelda franchise timeline. Delivered in nothing less than an epic rant! James Rolfe, we salute you!

One theme you’ll notice throughout this list is the size and depth of these collections. Truly the best part are the rarities and oddballs of any business eager to cash in on the rapidly evolving video game market. Stop Skeletons From Fighting got my attention with their focus on the history and technical details of gaming accessories and 3rd party accessory manufacturers.

The initial series that caught my eye was “Punching Weight”. Diving deep into the world of gaming accessories they not only obtain some rarities of the past like the E-Reader and Cheat Devices, but the ancillary items like Cards and Booklets that go with them and information about their releases.

The amount of time and knowledge put into 1 video is enough to earn any vintage gamer’s subscribe click. SSFF, thank you for sharing your collection with us!

If you your a info sponge like me then you will find yourself revisiting The Gaming Historian over and over again!

Hosted by Norman Caruso and written by Kristen Pitts, Gaming Historian dives super deep into the realm of legitimate video game production. You’ll get tons of information about some of the most renown video games and consoles to ever grace store shelves. Quotes from executives and historical factoids will leave you hungry for more! And shine light on just what was going on around us before we had the internet to connect all the dots!

The effort and time put into the research and execution of each video is precise!

And It also shows! The Gaming Historian one Youtube channel I still cant get enough of!

Hope you are as enlightened by these spectacular content creators as I am!

Let us know in the comments if you thinks there are other YouTubers we can add to our list!

Check out a side project we have here at Nerdbot called Retro Melody as we share a love of classic gaming with you through music!