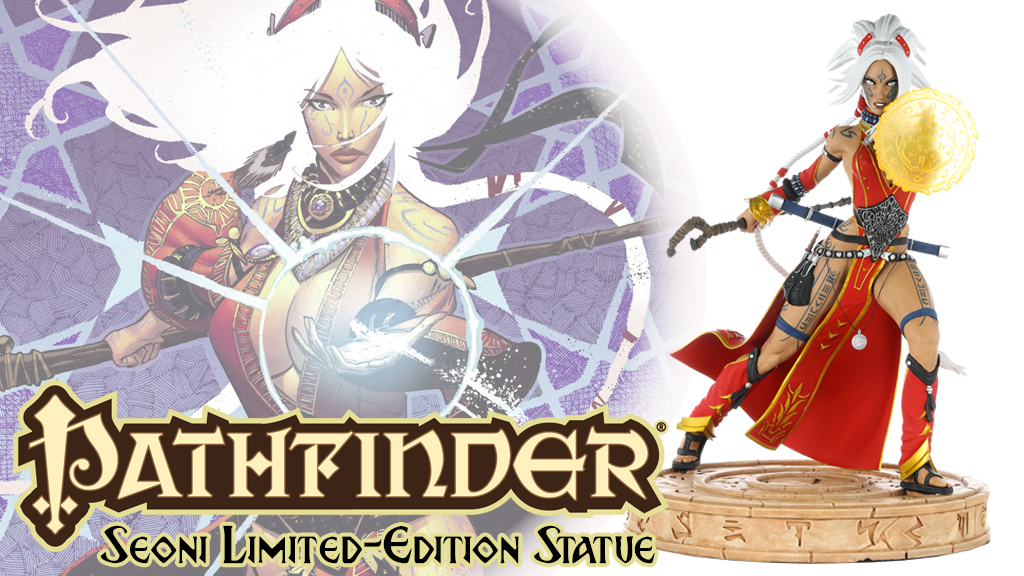 Dynamite Entertainment announces a Kickstarter campaign for the first-ever resin statue for the Pathfinder Roleplaying Game. The publisher continues their strong partnership with gaming leader Paizo Inc. following years of expanding the lore of the game’s world. Backers can preorder their copies of the limited-edition statue and bundle in a range of extras currently available only through the Kickstarter.

Seoni, one of the most popular iconic heroes in the Pathfinder universe, was an obvious choice for the statue. The powerful Varisian spellcaster is perfect with her intricate tattoos and patterned clothing. The high-quality resin statue stands approximately 12 inches tall. The tattoos and other details like “dirt” and battle damage are all hand painted.

The statue is available in multiple variants. A “Spellcasting” edition portrays Seoni using her signature magic using a plastic energy effect. The “Battle Ready” edition swaps that out for her staff and an alternate pose. The Spellcasting version is available unpainted for the DIY enthusiasts.

Supporters can choose among a range of reward tier options, including Dynamite’s well-received comics, from the recent Spiral of Bones series to a complete set of nine graphic novel volumes – over 1,600 pages of Pathfinder content! Another option is the campaign setting book Sandpoint, Light of the Lost Coast signed by author James Jacobs. And of course, t-shirts! Or go big and get all the above!

Most exciting is the opportunity for tabletop devotees to collaborate with Dynamite and a professional sculptor to develop and create 10 custom pewter miniatures up to 35 millimeters tall.

“We’ve been creating great Pathfinder comics with Paizo over the last half-decade, but today, I’m immensely excited to announce the expansion of that partnership, starting with our first Pathfinder statue of Seoni,” shared Nick Barrucci, Dynamite Publisher/CEO. “We worked hand-in-hand with our friends at Paizo to create this beautiful startue, and to add so many cool collectibles and comics at different pledge levels. I have no doubt the fans will enjoy this beautiful piece.”

“It’s been a joy working with Nick and the team at Dynamite to bring Seoni to life,” said Erik Mona, Paizo’s Publisher and Chief Creative Officer. “The attention to detail we’ve seen as they’ve produced the comic line is mirrored in the production values of the statue, and we’re excited to see these made available to Pathfinder players.

Why MST3K’s “Pod People” is the Perfect Halloween Tradition

All The Sexy Hunks From The MCU: Part One