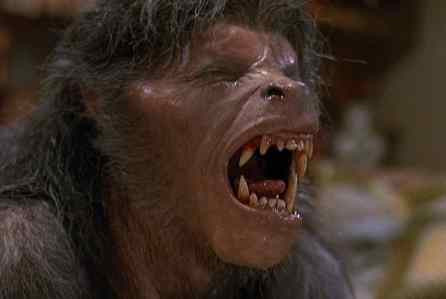 I’ve always loved magic in all its forms. Whether it’s something as simple and timeless as pulling a rabbit out of a hat, to magically finding my car keys in the exact place I left them even though I looked there twice, and they were nowhere to be found, to the magic of filmmaking.

CGI has made enormous strides in our lifetimes in helping to create amazing worlds, and magnificent creatures. But, I’ve always had a soft spot for practical effects in film, especially as it relates to sci-fi and horror movies.

Whether its puppetry, animatronics, stop motion, or make-up effects, practical effects never fails to open my imagination. CGI has had it’s share of terrible and goofy looking appearances in film, and so have my beloved practical effects. We’ll look at three of my personal favorites, then switch to three that just missed the mark for a variety of reasons. 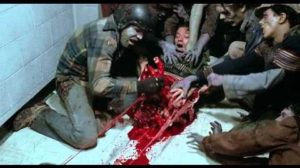 Tom Savini has been in the make-up and special effects business since the 70’s and has crafted countless memorable movie monsters and bloody effects.

While Savini and his crew showcased several examples of incredible makeup magic in George Romero’s Day of the Dead, the pinnacle for me is Captain Rhodes being torn asunder by the zombies near the films climax.

Captain Rhodes for those who haven’t watched Day of the Dead, is a complete asshole with no redeemable qualities. With humanity on the brink of extinction, Rhodes heads a military unit trying to keep everything in order through force, and intimidation. You’re just waiting throughout the movie for Captain Rhodes to get what he deserves, and when the undead finally get their hands on him, it’s a gloriously gory send-off. Never one to quit though, Captain Rhodes remains defiant even in the literal hands of defeat.

I’d say I’m a happy person who tries to look at the positives in everything whenever possible. I don’t have a lot of time for negativity, but every now and then I’m down for a little existential dread, and no film exemplifies that best for me, then John Carpenter’s The Thing.

Rob Bottin was tasked with creating the special effects in this 1982 classic about a crew of scientists stranded in Antarctica, with an alien life form that can mimic every one of them, almost flawlessly. I say almost, because there are times the crew catches the Thing before it can complete its transformation. Most notably in the film is when their colleague Bennings goes missing.

Kurt Russell and the team quickly intercept him, but this isn’t the Bennings they knew, and while there are more gore laden, horrific and detailed manifestations of the Thing later in the film, the simplicity of the scene below is truly terrifying. “Bennings” is almost completely formed save for some rather gnarly looking hands, and if the scream from within the alien before being set ablaze doesn’t raise the hairs on your arms, you just may be the Thing yourself.

3) An American Werewolf in London 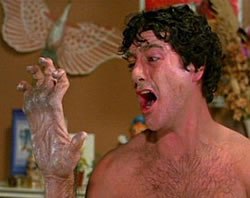 An American Werewolf in London is a film I only saw for the first time a couple of Halloweens ago, but it made an impression on me nonetheless. Two tourists are backpacking through London when they encounter a large wolf. The one tourist Jack is brutally killed, while his friend David survives but is bitten and is cursed to live his remaining days as a werewolf.

The highlight of this incredible film is the transformation of our films protagonist. Using make-up effects and animatronics Rick Baker creates a transformation scene that in my opinion has yet to be topped by anyone else, either through practical effects or CGI. In fact, the best CG doesn’t even come anywhere near the magic and wonder that is on full display here. It was so good, that Michael Jackson personally contacted director John Landis and Rick Baker to work on the music video for Thriller because of it.

You can undoubtedly see, hear and almost feel the excruciating pain that the films star David Naughton is experiencing as he shapeshifts below. 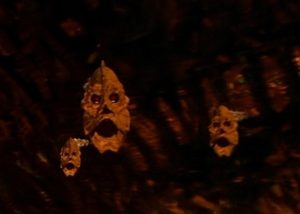 3D is a slippery slope, and has for the most part been a tacky, and forced upon gimmick in film, meant to impress and wow the audience with its supposed realism. So many times however 3D; when done poorly gives the viewer a headache, either from peering through those cheap ass glasses, or from rolling our eyes at how ludicrous what we’re seeing on the screen is. Whether it’s 3D from the 60’s like in The Mask/Eyes of Hell, or the 80’s and 90’s with films such as Friday the 13th Part 3, or Freddy’s Dead.

There are several cases near the end of Freddy’s Dead where something is projected at us on screen, the end of a baseball bat, or Freddy’s claw glove being knocked from his hand and skidding along the ground. But the most egregious is the “Dream Demons” that resurrect Freddy anytime he’s defeated and send him on another murderous rampage.

Watching the film, I actually thought this was a CGI effect, but it’s actually performed by an animatronic team, and for as hard as I’m sure they worked to pull this effect off, sometimes hard work doesn’t always garner the best results.

The Dream Demons don’t look particularly sinister or intimidating, in fact they’re pretty damn goofy. They look like three little swimmers (if you catch what we’re pitching) trying to find an egg, and they found one with this egg of a movie.

This one may be borderline. It’s far from the worst special effect I’ve ever seen, but for all the praise I sing about The Thing and Rob Bottin’s special effects work, this scene in particular stands out to me as slightly ridiculous and to be quite honest, doesn’t come across as convincing as some of the other monster effects throughout the film.

When the Norris character seemingly suffers heart failure and resident doctor Copper tries to revive him with a defibrillator, he ends up punching through Norris’ chest cavity and a giant set of teeth bites Copper’s arms off.

Copper’s reaction to having his limbs severed is fantastic, and is probably what you would expect upon having an alien lifeform making a snack of your arms, but the chest full of teeth just looks…off, and when Norris’ head pulls itself from its neck, as gnarly looking and sounding as it is (again it’s that scream from the earlier Bennings scene), you can pretty much tell this was a puppet.

You could make the argument that in this case we’re not looking at Norris the human though, but rather the Thing and its representation of Norris, and its internal structure isn’t going to completely match ours. Sure, I can get down with that. But, everytime I watch The Thing despite the heightened level of intensity within this scene, this effect always takes me out of the movie for just a moment. 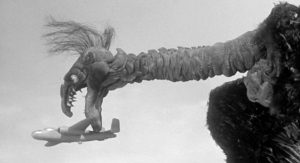 What, in the name of Ace Frehley is that thing?

It looks like Big Bird’s third cousin twice removed getting ready to check into a methadone clinic.

Now, I’m sure you may be saying, well that’s what you get from the fifties. Movies were in black and white and had garbage effects galore. To which I say, forget you buddy. It’s 2018 and despite the advancements we’ve made in special effects across all platforms, there’s just as much crap now as there was in 1957 when this film was released. What really is the issue here, is a little thing called a budget.

If you have a miniscule or virtually non-existent budget you’re going to have to scrape and get by with what you have, and what the studio had wasn’t a whole lot. At least in the case of The Giant Claw it’s lived on in infamy as a source of unending humor.

Is this giant bird monster an embarrassment? Definitely, but at least we can get a good laugh from its presentation rather than just outright dismiss it for sheer awfulness. And, we can all use a good laugh every once in awhile amidst the scares of the season.