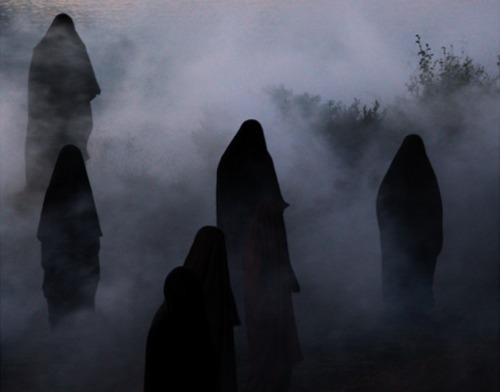 My Run in With a Gathering of Devil Worshipers

I haven’t had to many scary experiences in my life. If I had none have really ever stood out enough for me to remember to well, except for one. It was October 22nd about six years ago, that was the day I encountered some sort of cult in the woods.

My Aunt and Uncle live on a very large farm located in East Central Kentucky, on the edge of that farm is a thick wooded area myself and my cousins seemed to always dare each other to go in when we were younger. It had been a few years since we had done such a dare as we were older and my cousins were mostly married now with kids on the way.

We had all gathered at the farm that night for a family birthday party after which myself and my two older cousins decided to hop on a couple four wheelers and ride around the area late into the evening. A few hours later and we found ourselves at the edge of that wooded area. We looked around at one another thinking of all the memories we had of the place when we were younger. I had the bright idea to venture back into the woods.

Not wanting to be shown out by their younger cousins, my older cousins followed me in. By this time it was starting to get a little dark and I didn’t plan on staying in the woods long but something immediately caught my attention. As we got deeper I began to hear strange voices and all of a sudden the atmosphere got a lot heavier and I began to feel a little light headed. I could see some light in the distance up ahead in what looked like a clearing. My cousins felt the change in the atmosphere too and followed me to see what was causing the voices and strange noises we heard.

In the clearing we found about eight figures in dark robes their hoods pulled low over their faces. A fire illuminated what they were doing, in the middle of them was a large blanket or cloth with a pentagram in the middle. In the middle of that pentagram was a dead black cat. One of the figures leaned over the dead cat some sort of book in his hand as he read from it and his fellow hooded friends chanted over him.

It was possibly the scariest thing I have ever seen I was frozen in place out of fear. I thought they were going to summon the Devil right then and there. My oldest cousin gave our position away when he tripped over a log (a scenario straight out of a scary movie I know). His yelp caught the attention of the devil worshipers and the chase was on.

At that moment those dark clad figures came at his and I swear it was as if they moved faster than anyone I had ever seen, it could of just been my mind playing tricks on me due to the fear, myself and my cousins took off towards our four wheelers.

I could feel them getting closer and I swear one of them touched the back of my neck by the time we made it to the four wheelers the figures were close behind us and we barely made it and started them up.

We were faster on the vehicles but I swear those devil worshipers kept a close distance to us as they chased us a little further. I am not sure when they stopped I did not look back until we made it back to my Aunt and Uncles.

This will be something that will stick with me forever. I have not been camping or into any sort of woods during the night since then. At times I still have nightmares where I get caught and become a human sacrifice.

Moral of the story guys is do not ever go into the woods, at dark, close to Halloween unless you plan on running for you life.