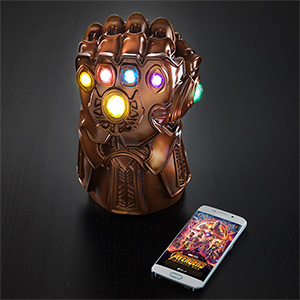 Enjoy the ambiance of a sensual glow without any of the dissolving bodies blocking your path. This Thanos Gauntlet lamp with give your power-den all the might of feeling like a villainous murder god without any of the mess involved in collecting deadly rainbow rocks.

…if nothing else, it’s cool looking… You can order the Marvel Thanos Infinity Gauntlet Mood Lamp right here for $39.99. The full list of specs are available below.

In other golden-fist news, the coveted Avengers: Infinity War Hasbro Marvel Legends Series Infinity Gauntlet Articulated Electronic Fist is currently in stock on Amazon for $99.95 with free shipping. Walmart also has them in stock online with free shipping. If the sell out there, your next best option is to pre-order one here. The next batch is slated to arrive in October.

This sucker won’t last for long, so get it while you can! The official description reads:

“A Mad Titan. Six Infinity Stones that control the multi-verse. One mission to destroy the galaxy, another to save it. A team of heroes ready for the fight. Whoever wields the Infinity Gauntlet wields the fate of the universe! Bring one of the most powerful weapons in the Marvel Universe to life! With this premium Infinity Gauntlet Articulated Electronic Fist from the Marvel Legends Series, lift up the power of the Infinity Stones and imagine taking control of the galaxy with the notorious gauntlet worn by the supreme being, Thanos. Inspired by the Avengers: Infinity War movie, this Infinity Gauntlet from the Marvel Legends Series features premium design and styling, as well as intricate detailing on the gauntlet and 6 light-up Infinity Stones. Features pulsating light effects, movie-inspired sounds, and individually articulated finger movement, as well as a fist-lock feature for display.”