It’s that time of year again! The leaves are changing in states other than California and the pumpkins all those people bought the first day they were sitting outside of Ralph’s have already begun to rot. Get those scarves you don’t actually need!

Halloween is an exciting time for children and adults who refuse to grow up (including myself). I’m pretty sure I would dress up as Dr. Alan Grant, complete with neck handkerchief, and ask for candy door to door by myself if it was socially acceptable. Yeah…I might do that anyway.

One thing I have come to terms with though is my disdain for the spooky element. Granted, the whole scary Halloween festivities are kind of a big part of this time of year, so it’s a flaw, I’ll admit. This is especially true when it comes to movies. I hate the horror genre, I’m a big wuss, I’ll confess right now. Oh, something jumps out at me? Yeah, no thanks. Oh, I get to see what intestines look like when being yanked in different directions? Hard pass.

I blame it on seeing Alien way too early. Talk about things literally popping out at you. It still ranks as one of the most terrifying movie experiences that I can remember, as I pretended it wasn’t a big deal. I’m the guy who saw The Grudge and didn’t sleep under his covers for three months.

I can’t be the only one! My Twitter feed blows up with everyone excitedly finding their slasher VHS tapes hiding in the back of their movie collection, and I just can’t participate. It starts so early too! Once the first pumpkin spice hits Starbucks, suddenly there are chainsaws and Kirk masks flooding social media. Maybe you are like me! Maybe you just hate all of it! Maybe you need some guidance in finding your niche to enjoy the season without losing sleep. There are movies for you too, my friend! Play with us here at Nerdbot…forever and ever and ever. 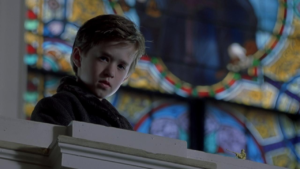 It’s a shame The Sixth Sense has been pop cultured into oblivion. I might have been the only one on the face of the planet that didn’t see this movie until this year. Again, my avoidance game of anything that might resemble a scary movie is strong! If there aren’t silhouettes of two robots and a pasty dude in front of a ghost movie, I’ll skip it. It’s also a shame that M. Knight Shyamalan has only gone downhill from here. I didn’t see Split so hold your fire!

The Sixth Sense is one of those movies that nothing really pops out at you but begins to haunt you the more you think about it. I’ve said it about movies and shows before, I want something to stay with me for days. I want the plot and themes to rattle around and start to drive me a little crazy. Just a bit, some crazy is good but it’s easy to overdo it, and before you know it, you are quoting Aragorn’s speech at Thanksgiving…again.

The Sixth Sense plays on the theme of fear itself throughout. It’s not really all that interested in having jump scares but rather wants your skin to crawl for days. Simple shots of small oddities that happen around the now infamously gifted Cole Sear…Sear! Damn, that’s really the kid’s character’s last name? Anyway, the strange things that occur around him are unsettling and grow into that escalated sense of terror as time goes on.

My favorite line is when Cole explains that when you feel that chill when you are alone, that’s when the ghosts are angry. That’s something that you forget until days after the movie, and you are in a dark house all by yourself. That’s the kind of scare that makes a movie worth it. Don’t get my heart pounding because some creepy lady’s face appears in a bus window randomly. Cheap! Give me that creepy hangover days later. 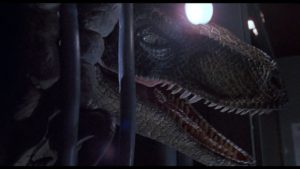 Yeah, hate me all you want for putting this movie in this lineup, but dammit give me, who is too afeared even to see critically acclaimed movies like Get Out, something to go with.

I have empirical evidence from a sample size of one person to justify this here. As DJ from The Last Jedi would say, “let me learn you something big.” Hate me for that too if you want.

My fiance and I went to our friend’s house recently and introduced one of them to the original Jurassic Park for the first time. (And I felt bad for not seeing The Sixth Sense!) She was super into every bit of suspense throughout that movie. It was actually a delight to see this taking place because, after 100 or so viewings, I know every little detail far too well.

The slow buildup of the T-Rex breaking through its fence and things getting completely out of control had her on the edge of her seat. Well, she was sitting on the ground, but still. Then came the raptors. The excitement was ramped up, and soon they were bursting out of electrical cables giving Laura Dern a hard time. It was at that exact moment our friend jumped about five feet off the ground, smashing her knee into the coffee table. 1993 y’all…still got it!

Jurassic Park plays on the fact that there just wasn’t the budget or mastery for the CGI to carry the film. The way it’s shot and the importance of characters I actually care about make it a classic. Just because there are a billion gifs and memes thanks to the internet and decay of the entire franchise doesn’t mean the original isn’t worth going back through. New October tradition maybe?

Plus you get Jeff Goldblum’s creepy laugh, so it totally makes the cut. 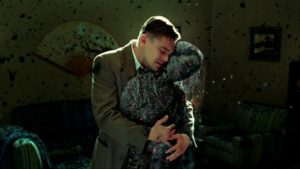 This is the movie where I realized oh…hello Leo, how have you been? Why have I forsaken you?

Nothing says let’s make a horror movie more than a terrifying island dedicated to taking care of mental issues in the most terrible way possible. The plot literally hinges on you making the assumption that this is what that movie is all about.

Then it suddenly becomes all about emotional stress and extreme loss. Shutter Island isn’t a terrifying jump scare-athon set in the perfect location but rather a dive into the fragility of the human mind. What we really need to fear is our own brain turning on us. Damn Scorsese! Thanks for making me walk out of the movie theater with an existential crisis. Also, thank you for not making it jump scares and boring, overused tropes. Not that you should ever expect that from Scorsese, but still.

I will warn you though, this will make you think for days. It will also hit you hard in the feels. Try to keep that lump in your throat down as Leo’s character, Teddy Daniels, has that emotional flashback. You know…the one where he goes into the lake. Yeah, good luck. 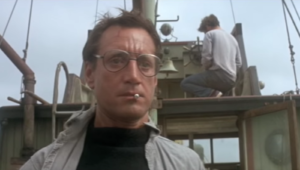 Hate me again all you want.

If Jurassic Park avoided showing too much because of technology constraints, then Jaws is like that but also wearing a long sleeve turtleneck jacket.

The classics are classics for a reason. Franchises, even if everything following the first movie are trash, begin out of something that is usually unique and groundbreaking for its time. I can’t say the same of Transformers I guess, but there’s always the exception.

The famous opening scene shows a woman viciously attacked without really showing you anything at all. Her screams of terror are enough to keep sharks in the back of your mind, even when you enter that kiddy pool you forgot you had at the back of your garage.

I’ve been shark cage diving, and the sharks were the least scary part of the whole thing. It was looking straight down that did me in. Not only was it nausea-inducing to do so, but the abyss stares back. It’s the great unknown that haunts us more than anything. Let your imagination run wild, and that’s all you need to keep rational thoughts from helping.

Movies that can play to those strengths, the dark corners of the human mind, usually have the most effective terror. The unknown isn’t even all about the horrible fate that will probably befall the characters. It’s all about the anticipation about what may happen.

In one scene two men are fishing off the pier only to have the fish turn against them. The shark rips apart the dock leaving one of the men to swim back in desperation. Soon that chunk of dock attached to Jaws makes right for the desperate swimmer. The pace of the music gets more and more anxious and panic streaks through the voices of the characters in what is sure to be their final moments alive.

Then they both make it. They are fine. It’s not about getting to see two men get torn to shreds, it’s about what might happen. It’s the horror of the struggle for life, and even in victory, it’s something haunting. It’s primal.

I know the outcome of this scene yet it doesn’t make a difference in how much my heart races each time.

Okay, you got me. This one is genuinely horrifying.

Annihilation has all the things I usually despise in horror films. It has its fair share of gruesome gore, some jump scares (although few and far between, which is why it still makes the list), and woman being wrecked by whatever is hunting the cast.

Yet all of these are used in some kind of beautiful, horrible symphony of mind-altering storytelling. The gore is to point out the super not great effects the Shimmer, the name of the weird phenomenon that alters reality, have on those who enter it. The jump scares barely count as such as the movie slowly builds up its terror repertoire, and the suspense makes you wait in anticipation through just about every single scene.

The women are attacked because, well, they are the cast. This movie quietly flaunts the fact that women are the ones needed to go figure out just what the hell is going on in the Shimmer.

Then the bear comes. Every single moment that damn thing is on screen, or within earshot…which I won’t spoil just what makes it so genuinely frightening, is enough to make every cell in your bloodstream reduce to a crawl.

My hands were sweating, my heart was probably not working at all, and I tried my best to keep my imagination to a minimum when I closed my eyes to try and sleep that night. The other movies on this list are certainly meant to help you get here. It’s number one for a reason, and if you want to pretend I didn’t put it on this list, I won’t judge you for it.

All of this culminates in some truly 2001: A Space Odyssey craziness at the end that leaves you thinking some more. And worse…you want to watch it again. I made it through, so trust me, you got this!

So, are typical gore, jump scares, and terrible tropes getting in your way as you try to enjoy some Halloween-esk movies? Well, fret no more, and you aren’t alone. We hope our list helps and doesn’t keep you up all night overthinking all that scary stuff.

Until there’s a chill in your room…in the dark…by yourself.