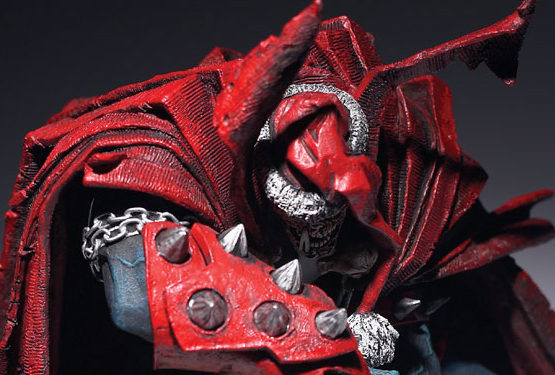 Spawn is one of the most enduring independent comic book properties of all time. Created by Todd McFarlane in 1992, Spawn is the tale of assassin Al Simmons returning from the dead as a demonic Hellspawn soldier. But Simmons was just one of many Spawns in several different timelines and universes. Many of these alternate Spawns were seen in flashbacks, spinoff comics, and of course, toys!

McFarlane created his own toy company to control the release of Spawn merchandise, and they quickly made a name for themselves with high quality collector’s pieces. I was a collector myself when I was a kid, and there was no shortage of re-interpretations of the Hellspawn concept. Now, we’re going to count down the ten best of them! 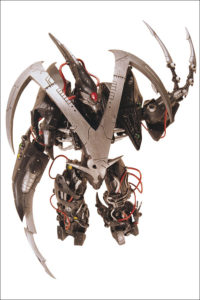 What do you get when you cross a Hellspawn with Robocop’s ED-209? This hulking mass of plastic from 1999’s Techno Spawn line gives the demonic hero a healthy dose of cyber-punk style! Not only is he covered head-to-toe in wires and cables, he also has some epic accessories: a massive serrated blade arm, articulated claws, and a rubber tail.

Cyber Spawn was the crown jewel of the Techno Spawn series, which inexplicably featured cyborg animals like warthogs, crocodiles, and rhinos. His odd opponents aside, Cyber Spawn makes for a wickedly high-tech addition to your Spawn collection. 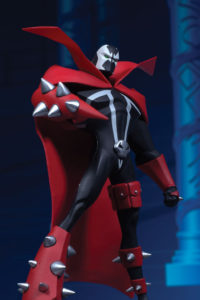 Ever wonder how Spawn would look as a Saturday morning cartoon? McFarlane Toys answered that question in 2006 with their Adventures Of Spawn line. Featuring a Bruce Timm-inspired design and a new sci-fi/fantasy origin, this Spawn could have easily cameoed on the classic Justice League cartoon.

The whole line was filled with awesome, tongue-in-cheek redesigns of famous Spawn characters, but there’s something especially eye-catching about the main man himself. For a grim character like Spawn, this version feels wrong yet so endearingly right! 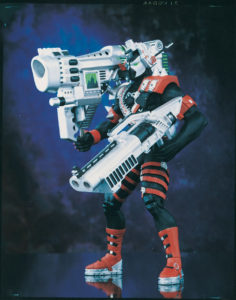 This one’s a bit of a cheat. Released in Series 2 in 1995, Commando Spawn is just a heavily armed variant of the normal Al Simmons Spawn. But how could I leave him out? With his high-tech headset, massive future cannons, and straps galore, he is the perfect representation of ‘90s comic book excess!

My favorite part of him, though? The boots. There’s just something about those red boots with the steel soles that puts this guy above the other gun-toting Spawns out there.

7) Spawn the Bloodaxe and Thunderhoof 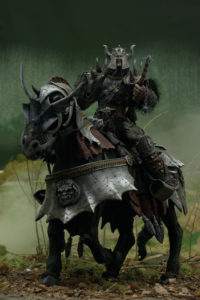 Move over, My Little Pony! We’ve got an even more fabulous horse to add to our toy collections. Meet Thunderhoof, the trusty steed of Spawn the Bloodaxe! Released in 2002 as part of the Viking Age series, this pair made for a humongous deluxe box set.

The Spawn in this set is actually a variant of the single release of Spawn the Bloodaxe, losing that toy’s cape and adding a more mask-like helmet. But really, it’s Thunderhoof that makes this set. You’ll never get a better war horse for your shelf!

6) Curse of the Spawn II 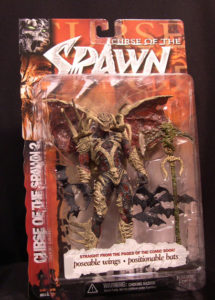 Talk about edgy! Curse of the Spawn II was the flagship character from the Curse of the Spawn toy line in 1999. Coming from a post-apocalyptic future, this guy is more skeletal and rotten than your typical Spawn, and his sculpt only got more hardcore with this second version.

I may have a bit of bias with Curse of the Spawn II. He was actually the first Spawn toy I ever owned (thank you, Mom, for letting me get him at the ripe age of 7). But how could I not put him on the list, especially when the box advertises “poseable wings” AND “positionable bats”? He screams “gothic horror” louder than most of these toys! 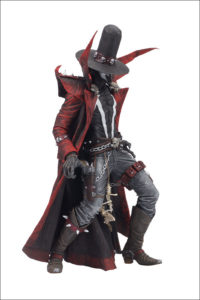 Straight from the pages of the comics comes the fan-favorite Gunslinger Spawn! Released in 2005 as part of one of the many Art of Spawn toy lines, the Gunslinger is sculpted directly from a panel in Issue 119.

Though initially just a cool throw-away character in a group shot of Spawns throughout time, this guy captivated fans imaginations with his bright red duster, ten-gallon hat, and cowboy swagger. His first figure proved so popular that they re-released him at twice the size later that year! 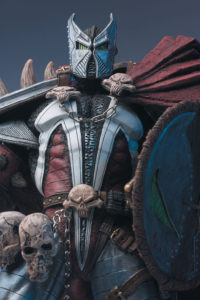 The original alternate version of Spawn, first appearing way back in Issue 9 of the original comics! Medieval Spawn has been a staple of the Spawn toys, dating all the way back to Series 1 in 1994. So why did it take them three tries to make it onto this list?

The first Medieval Spawn was much more of a kid’s toy (it was released alongside the Spawn Mobile, for Pete’s sake). The second went for a much more gory, zombified statue look. It was only with this third iteration, released in Series 20 in 2001, that they struck the perfect balance between comic book accuracy, hyper-realistic detail, and toyetic charm. 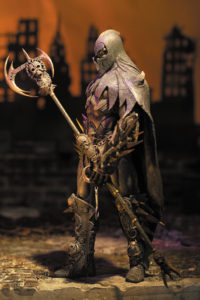 First appearing as a nemesis to Al Simmons in the spin-off comic Hellspawn, Raven Spawn has had a decent handful of toy releases. But his first figure still takes the cake.

Released as part of 2002’s Alternate Realities line, this guy became a quick favorite. Sure, he may not have been as eccentric a take as Pirate Spawn or Alien Spawn, but he makes up for it with a sleek and unique design. With his green cape and skull-hiding hood, Raven Spawn was a toy that stood out for all the right reasons. 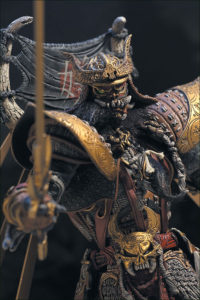 Get ready for some epic hack and slash! Samurai Spawn came out in 2001 as the main character of the Samurai Wars line. With an intricate, impressive, and intimidating sculpt, this guy was sure to please. He even comes with actual hair! He has tufts of fur under his shoulders, his knees, and forming his braided beard.

His real claim to fame is just how fun he is in hand, though. Released during a time when McFarlane Toys leaned heavily towards the “slightly poseable statue” camp, Samurai Spawn stands out by actually feeling like a TOY. His range of motion is extraordinary, with multi-directional articulation in the neck, shoulders, waist, and hips. He’s sculpted for display, but he’s built to be played with. 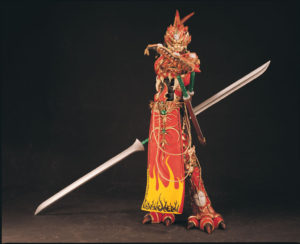 Sitting at the number one spot, the prize of my personal collection (and the one I made sure to bring with me when I moved to my apartment) is the Scarlet Edge, Mandarin Spawn! Released in 1999 in the first Dark Ages line, his mix of Chinese iconography and brilliant red and gold paintwork makes Mandarin Spawn a beautiful display piece.

While the Dark Ages series also boasts Spawn the Black Heart, a more traditional medieval style Spawn with four arms, Mandarin Spawn completely overshadows him. His is an allure that transcends fandom. You don’t have to be a Spawn fan to seek out Mandarin Spawn. You just have to have an appreciation for an excellent toy!

What’s your favorite alternate timeline Spawn toy? Let us know in the comments!