Jason Pargin, known by is pen name David Wong, is the author of the ‘John Dies at the End’ book series. He’s also the Executive Editor at Cracked.com. His last book, titled What The Hell Did I Just Read, is out in paperback now and he’s currently writing the sequel to Futuristic Violence and Fancy Suits, so catch up on the first one now. You can also check out his writing and editing work all over Cracked, or follow him on Twitter. 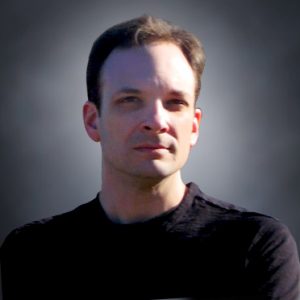 Hi Jason! Thanks so much for giving us this interview. For our Nerdbot readers who may not have had the privilege, would you please introduce yourself and some of the writing work you’re best known for?

Unless I’ve been fired/arrested by the time this goes up, I’m the Executive Editor at Cracked.com and have been there since the Bush administration. I also am a NYT bestselling novelist, though I have since found out that some authors have made the bestseller list by driving around to book stores and buying up all of the copies themselves. Just, piling them in their trunk.

Can you tell us more about the John Dies at the End series? How many books are in there and is the saga finally complete?

There are three books, each title dumber than the last, plus a movie. I’m under contract to write a fourth and there may be … other things in the works. I’m not saying there will be an off-broadway musical, but I’m not NOT saying that, either. 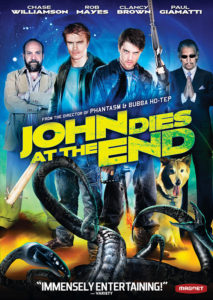 How did you feel when you were approached to do a movie adaptation? I’ve seen it of course, and everyone I know whose watched it geeks out over it so hard. It is definitely well-loved.

Well at the time I was working in an office doing data entry on insurance claims and the book was a print-on-demand deal that had only sold a few thousand copies. I had no agent or editor or anything else a pro has. So I ignored the first couple of emails asking me about movie rights, thinking they were a prank, and in fact I kind of still thought it was a prank right up until I saw the movie at Sundance a few years later, sitting next to Paul Giamatti, thinking, “Man, they’re taking this really far.”

By the way, I don’t want to act like this is some kind of rags-to-riches story — lots of people reading this would kill for that data entry job I had in 2007, it had health insurance and everything. I’m just saying I wasn’t in the industry at all, I was just a guy.

What does a typical work day as Executive Editor look like for you today? How does that work day differ from your action list or pipeline from a few years ago?

It’s so boring that I’m trying to think of a way to sex it up, but am failing. I spend about half of my day editing articles, half of my day working through article ideas and pitches with writers, and half of my day doing emails and conference calls about traffic and revenue and other business type words. Yes, I realize that’s three halves – in this business, everyone is doing like four people’s jobs. Occasionally assassins will show up at the house but they’re pretty easily dispatched, they’ll pump bullets into a lump on the bed, not realizing that they’re shooting pillows and that I’m lurking in the shadows behind them.

Outside of Cracked, are you working on any new projects? Are you writing any new novels or working on any projects that involve new (at least for you) media? Are you making any convention or expo appearances?

Right now I’m writing the sequel to my OTHER book series, the sci-fi Futuristic Violence and Fancy Suits. The working title is Zoey Stabs the Future In The Dick, and by working title I mean that’s what I named the Word doc when I saved it for the first time. I almost never make public appearances, my schedule just won’t allow it – all of my vacation time at Cracked is spent writing the books. I really don’t take days off. I have to write as much as I can before people realize I’ve been faking it.

What’s one of the craziest experiences you’ve ever had that directly involves your line of work? Have you received any weird emails or phone calls from fans or staff? Have you been recognized in public?

I get recognized in public about once a year – people who are merely fans of the site or the books don’t know my face because my pictures aren’t on either. So you’re talking about a special kind of fan who A) knows my face from my YouTube channel or B) is an actual stalker. It’s very possible someone has tried to call me, but I just don’t answer my phone unless it’s a number I recognize. Why would I? 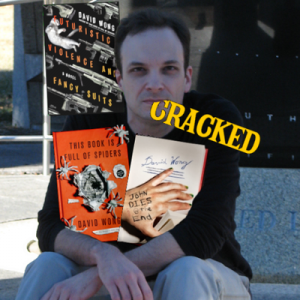 How about one of the best or most unique experiences you’ve ever had because of the industry you’re in? Have you ever met anyone who inspires you or traveled anywhere amazing as a direct result of your job?

Sundance will always stand out, I think; it will always be my first time going to an event like that with famous people. But there was no point where I felt like a star or like I’d made it, all I could think about was how much money and effort these people had devoted to the thing I’d written, and how much I hoped they’d make it back. I was among a bunch of people who to some degree or another had tied their careers to this thing I’d written and I was very worried for them, as I pretty much destroy everything I touch.

Because Nerdbot focuses on Fandom, tell me a little about your own relationship with media and fandom. What movies/shows/franchises really excite you? Do you collect anything or have any toys in your house?

Fandom has such a bad reputation in general these days that I hesitate to throw myself in with any. Like I enjoy Rick and Morty, but feel like the moment I walk around in public in a t-shirt I’m identifying as a certain type of obnoxious person (even if most of the fans aren’t like that, the loudest jerks get all the attention). I think Bojack Horseman is one of the most important comedies ever made, but the idea of buying an action figure of him is just weird to me. It all has a negative connotation in my mind, being TOO into something. I guess that’s sad.

On the flip side of that depressing anecdote, do you have any hobbies that people might not expect? Do you watch anything or take part in any activities that might surprise your fans and people who have been following your work for a long time?

People are always surprised to hear that I compete in triathlons, mainly because I don’t appear to be in good physical shape, never train, have no trophies or photos, get winded on escalators and, if pressed, cannot actually list what events comprise a typical triathlon. They’re even more surprised to hear that I have to do all of that in secret, because of my years I spent undercover with the Yakuza.

What’s one of your biggest take-aways as the Executive Editor of a site like Cracked.com? What are your visions and goals for the site and where do you want it to go in the next few years?

My biggest takeaway is that this industry changes every week and will make a mockery of your long-term plans. The ONLY goals you can set for next year, or next month, is the goal to make yourself as flexible as possible, to have a team of people who can do different things, and a process that can turn on a dime. For example, I don’t think anyone in the summer of 2016 was projecting what content would look like in a post-Trump victory world. And then everything changed overnight – the subjects people want to read about, the formats, it’s all completely different now. It changed on election night.

So yeah my only plans for 2020-21 are “Make sure we have a team in place that can deal for whatever weird new thing unexpectedly turns the world upside down.”