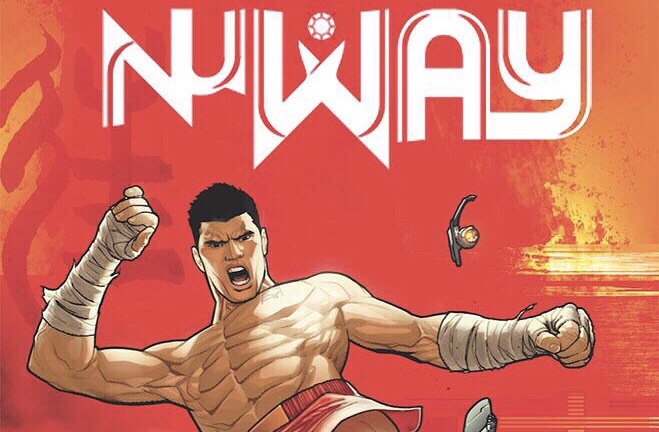 It’s Aspen time here at Nerdbot and this week we’re taking it back to the futuristic landscape of New Zheng as we get ready for a brand new chapter of Nu Way. 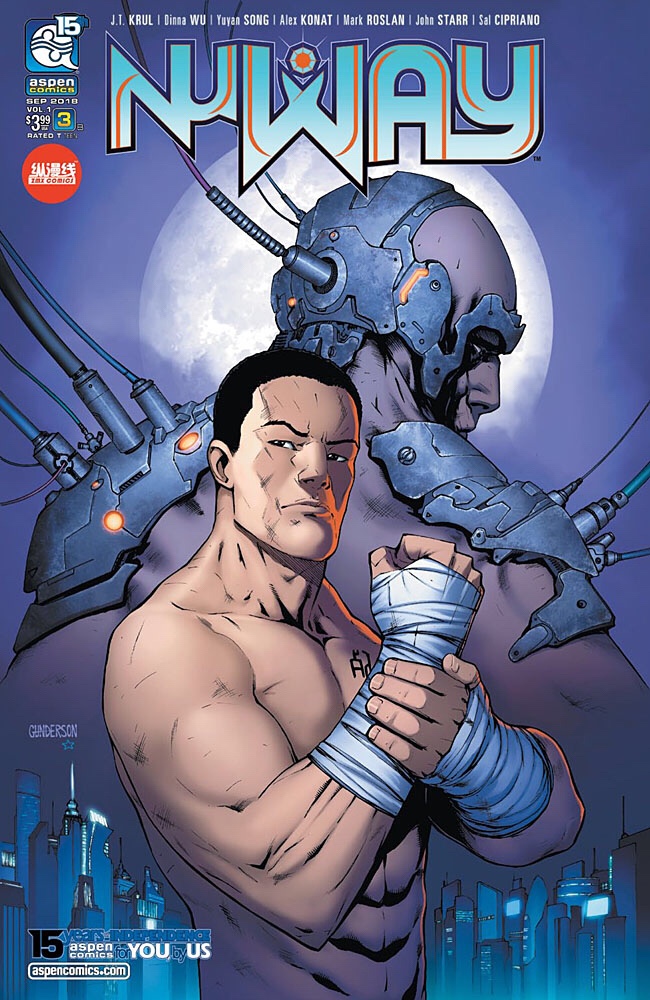 Since I have been reading slash reviewing comics from Aspen I’ve had to kind of jump into the series. No joke, diving face first without any prior knowledge or familiarity. So what makes me happy is this will be the first time I’ve gotten to continue the discussion of the material the same way I do with my coverage of DC’s Doomsday Clock.

We open “Urban Brawl” right where we left off last issue, Zihao and Harper, post compound breakout, are on the streets. 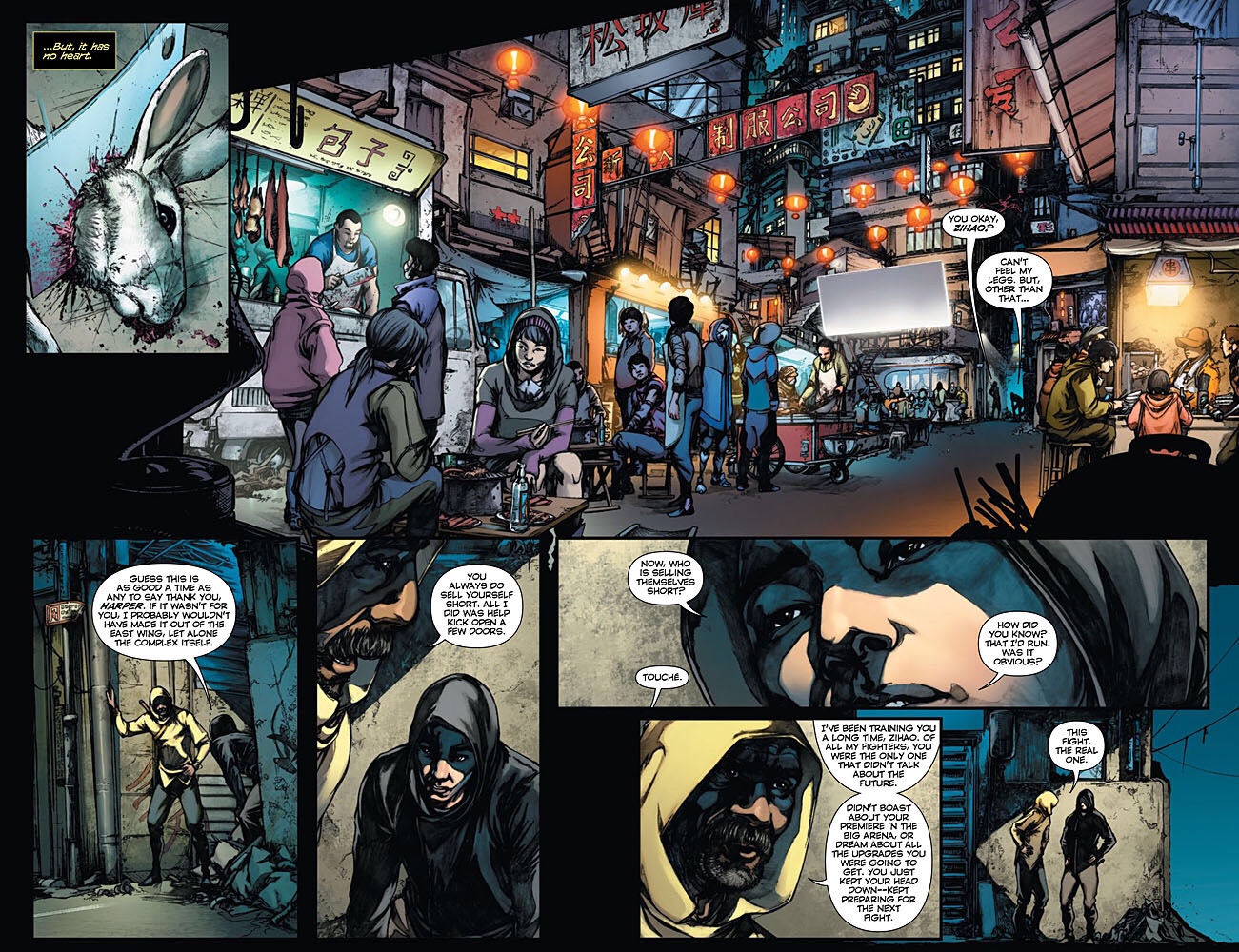 Just a quick update on our leads before it’s off to the Central District Monitoring Authority. Jasper uses facial recognition software to hunt down our heroes and he’s already sniffed them out.

Then we’re back Harper and Zihao who engage in a metaphorical conversation over a couple bowls of ramen. Yes, they have ramen in the future, thank God. Basically Harper recounts his time as a fighting dog trainer, exploiting animals who were victims of their situation and how the same exploits are apparent in his relationship with Zihao. He accepts the fact he was no more than a “butcher” fattening his talent for slaughter. Helping Zihao escape was some attempt at redemption.

The emotional moment comes to an end as Qiang shows up with the Elite Arena private security force. So naturally, a fight breaks out. Punches here. Kicks there. Qiang even gets the upper hand until Harper unleashes a power that causes a major explosion. The media covers the incident though nobody knows exactly what happened. 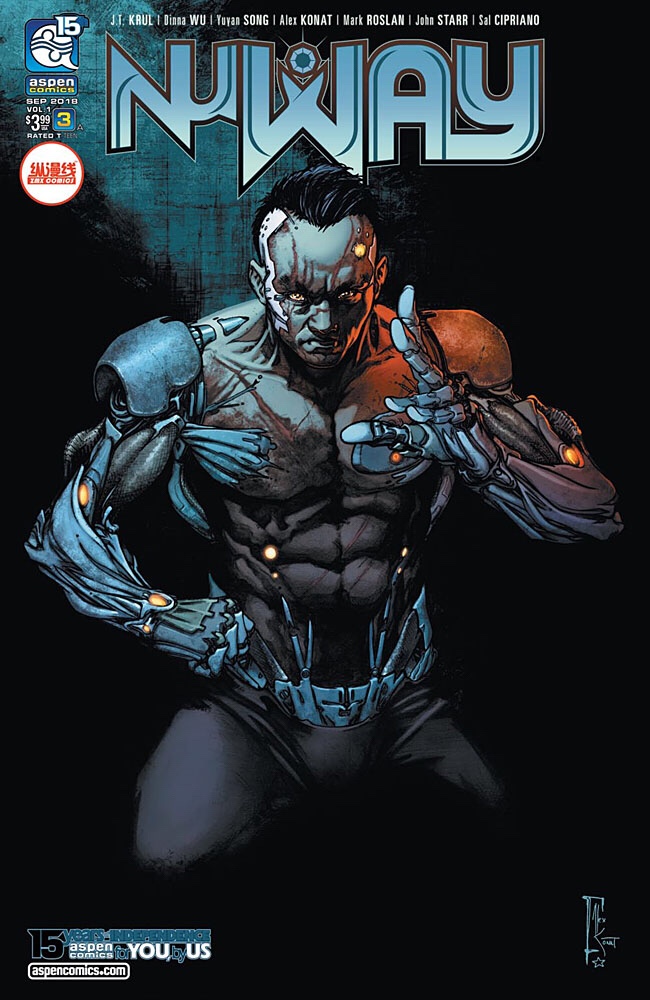 Next, Jasper calls Lei screaming about the publicity nightmare before them. Jasper sees this as an opportunity to explore venues outside of the arena and increase ratings for his Running Man-esque programming.

After a short flashback centering on Cassi, Zihao and Harper seek medical attention from an underground doctor who also has a sister that is an impressive hacker. She sets up a line of communication between Zihao and Cassi as the issue comes to an end.

Though I’ve only read two issues, I can tell Nu Way is something special. For a story that’s supposed to be focused on these Robo-gladiator fights, it’s honestly more about the characters. You hear that often when people critique a show, book, or movie. However most of the time it turns out to be quite the opposite. Sure we are involved with those on the Walking Dead, but take zombies out of the equation and there’s nothing. With Nu Way, I haven’t even seen a single battle in the arena yet. Of course there are flashes of fisticuffs, yet overall a sacrifice of violence is made for the better sake of story. Dialogue driven sequences before the gloves come off provide a great balance while flashbacks provide further insight to our characters. As much as we want it sometimes, comics can’t be all pows, bings, and zams.

A great comic finds a harmony between action and development. Not just world building, actual character development. Fights can only go so far. Personally I have to hand it to the writers on that one. It’s like they have carved a perfect niche for readers who want science fiction with depth. When the payoff happens I have a feeling it’s gonna hit hard.

The latest issue of Nu Way is in stores now!

Where do you think Nu Way goes from here? Let Nerdbot know in the comments!!