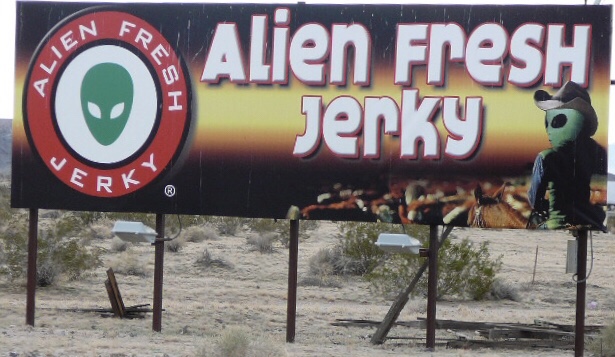 So Alien Jerky Is A Thing

It’s no secret that for the last month I’ve been wrapped up in a cross country move which has consumed a truck load of my time, money, and sanity. Part of this whole cornucopia of events included me driving for thirty six hours throughout our beautiful nation, finalizing any desire I might have had to “see” America.

Believe me, I was on the lookout for any interesting subjects to write about and much to my surprise, there weren’t too many. Within this quest to find Nerdbot relevant content, I stumbled upon something, one thing, I felt deserved the online article treatment. Alien Jerky, clearly not made from extra terrestrial life forms, is a store located in Baker, California. You start to see signs for the place outside of Las Vegas, then it’s not too long before you are aboard the mothership of dried out meats. It’s obviously a play to the UFO culture in the desert which has remained prominent since the Roswell incident back in 1947. Having a secret government base there also adds fuel to the conspiracy fire but you can talk probes with the locals while you munch on some delicious jerky.

Head to alienfreshjerky.com to place an online order. Or make the drive to 72242 Baker Blvd. in Baker, California.

Be sure to check out Ghost Town Road on the way, it’s some real second act of Terminator 2 type stuff. As someone from the Rust Belt… it made me feel right at home.

If they made actual Alien Jerky… would you try it? Let Nerdbot know in the comments!!

There’s Something Special About Shazam