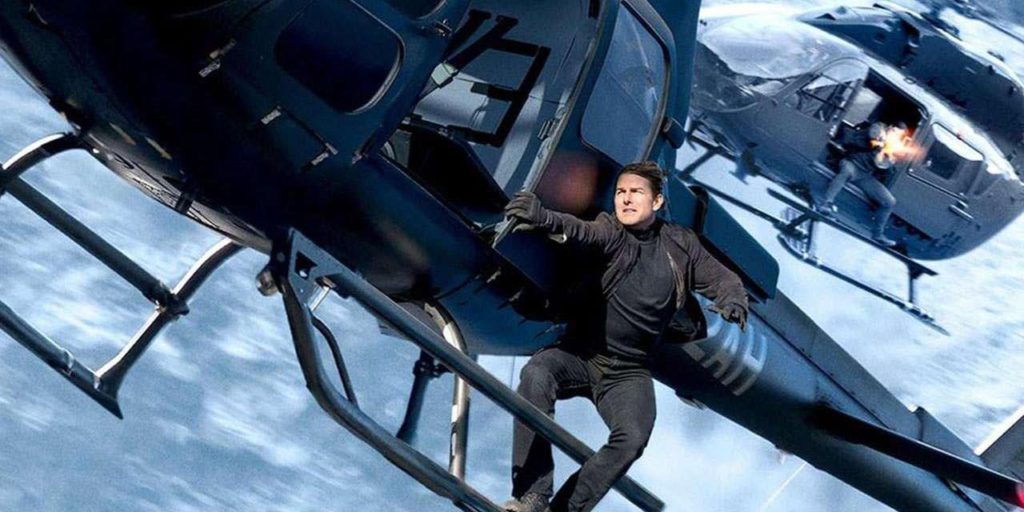 How good is Mission: Impossible – Fallout? Three quarters of the way through it I realized I had totally forgotten I was supposed to be reviewing it. Why’s that a big deal? Well, have you ever tried counting the nuts and bolts on a rollercoaster in the middle of the ride?

That is perhaps the most tired metaphor for action cinema. “A real rollercoaster!” But exiting the theater that was the only metaphor that really made sense. The propulsive nature and relentless tension of the experience of Fallout pulls the feeling over two and a half hours that you’re used to waiting two and a half hours for to experience for a minute and a half. This movie should come with a warning for pregnant mothers and riders with heart problems.

Over an improbable twenty-plus years and now at a truly impossible 56 years old, star and producer Tom Cruise has mastered the art of separating your body’s reflexive responses from your intellect’s knowledge. Stunt after stunt, sequel after sequel, Cruise makes the ghost of Evel Knievel blush with his latest death-defying act. And while your brain may know that Tom Cruise’s Ethan Hunt probably wont die in the first ten minutes of a movie about him… your body lurches up in its seat, your jaw drops, your pulse rises. If you’re afraid of heights, you might even get nausea.

That is no small feat, and Fallout is a film of no small feats. Tenuously connected and always featuring a different director (until now) the Mission series made its bread and butter in being an action sampler platter, serving the audience the same cuisine via different dishes each time out. This time Oscar-winning writer and current Team Cruise MVP Christopher McQuarrie (The Usual Suspects, Valkyrie) makes his mark as the first returning writer/director of the franchise after already making his mark decidedly on it with the exemplary Mission: Impossible – Rogue Nation. But this move hardly represents Cruise and Paramount merely pulling leftovers from the back of the fridge.

Fallout may have a familiar plot – terrorists want plutonium to do deathly destructive things – but wrinkles that familiarity with the presence of Henry Cavill’s CIA bludgeon, Walker – sent to monitor Hunt and crew in a fantastic “will they/won’t they” kill each other punch-com, as well as returning other favorites and antagonists from the OG’s like Ving Rhame’s Luther Stickell to more current All-Star’s like Rebecca Ferguson’s to-meet-her-is-to-love-her Isla Faust and Sean Harris’s quiet creeper with confident menace, Solomon Lane. But from these highlights down to Angela Bassett and Alec Baldwin’s agency boss characters, to particularly Michelle Monaghan’s surprising (but it’s in the trailer guys) return as Ethan’s once-upon-a-time wife – this Mission sets itself apart maybe with less a new brand of action, than with a heavy dose of emotion. Everyone has some degree of pathos to play; and while you’ll white-knuckle through action beats, you’ll be shocked at how much you’re feeling in a 20 year old action franchise too. Stakes are more applicable than they’ve ever been, and plutonium too, is made personal.

Tom Cruise gives a performance through all of this that says not just “look how fast I can run!” but “don’t forget I’m one of our great actors”. His dedication to the dangerous is obviously impressive, but his more imperceptible commitment to craft shows why we’re lucky to have such an actor playing this role with a subtle, purposeful nuance that could be unguided wooden flotsam in a lesser performer’s hands.

This is all, in thanks, to Fallout finally cracking one of Ethan Hunt’s defining characteristics (besides merely being Tom Cruise). Frustrating philosopher Jeremy Bentham and Vulcan Mr. Spock, Ethan Hunt shorts out when confronted with the choice to choose the needs of the many over the needs of one or a few, and simply will not. A person’s life, stranger or bestie, is equally as important as a continent’s to this hero. What feels like a simple philosophical exercise also provides new levels, moments and inventive instances of tension throughout this installment. There is a maze, a labyrinth plot of action sequences and double-crosses that leads to that plutonium Hunt and his team need to save the world, but who will Hunt go through to get there, and can he? This dynamic adds a nice foundation of emotional stakes that’s amplified through every familiar face Hunt encounters, and every stranger he’s faced with threatening.

Bad guys, however, still get disposed of with aplomb. And there are plenty of bad guy bricks to build out this movie’s myriad action sequences. Watching Fallout after the rest of the series is a bit like knowing Bruce Banner, thinking he’s a pretty tough guy you’d rather not mess with, only to see that bastard turn into the HULK. Some familiar features are still there — a motorcycle chase, a beat ’em up rendezvous with assassins, a stunt on a rope — but they’re presented with such adrenaline and ferocity that you’d swear you’d never seen them before, and maybe want to hide under your chair.

It is perhaps not widely known that Cruise and his Impossible creative compatriots think of action beats and stunts first and then find a cohesive way to retrofit them into an appropriate plot. And while that makes story take a literal backseat, you’ll never sense it, even as it has the upside guarantee of making every action sequence mount, and mount, and intensify and outdo the last in a tantric exercise that would shame even Sting or Christian Grey. But damned if it isn’t exhilarating.

It’s difficult to applaud each of these without giving them, or their sequence away, but if Brian DePalma’s low angles and split-diopters defined Mission at the first, and John Woo’s doves and flames sent Mission to peak (now sorta silly) 2000 cool in M:I-2, decades and directors later McQuarrie in his second installment has solidified his own trademark — impact. Every punch, leap, collision and shot hits to shatter, snap, break. This carries over into the plot as well, with each wrinkle being decidedly felt, and is all shot in beautiful wides or breakneck mid-to-close. When Tom Cruise jumps out of a plane that’s flirting with breaking the Earth’s atmosphere, you will feel it in your throat. When he flies through porcelain in a bathroom brawl, you’ll wonder if your doctor has openings tomorrow, when he engages in a dizzying helicopter chase and duel, you’ll giggle as you break from sanity – the mind and body having completely surrendered to this movie’s elevated, unmatched madness – only for it to then dare you to go two steps further. And it’s all jarringly, breathtakingly real. There is no doubt it is Cruise hanging under the helicopter or jumping from the building as much as there’s no denying the gorgeous cinematography that captures Paris, London or the mountains of Kashmir in the background.

Mission: Impossible – Fallout is the best movie of the summer. In a summer full of hits “McQ”, Cruise and the rest of the IMF crew have found a way to make their earthbound spy game, in it’s sixth iteration, hit harder than Thanos’s gauntlet, franchise veteran Brad Bird’s beautifully staged Incredibles sequel, than a CGI mutant dinosaur, than The Rock fighting a building with his bare hands. From the opening moments of Lorne Balfe’s percussive score (the best since Whiplash or  at least since you discovered the kitchen pots and pans could make disconcerting noise if you hit them with a spoon) you know you’re in for something hilariously and gratefully unrelenting, a marathon of entertainment. That’s before iconic theme’s been heard or a title card’s been seen. This movie is special. It has nods for the die-hards and new wrinkles for those accepting their first mission. It is probably one of the greatest action movies ever made, one of the most technically impressive movies I’ve ever seen, and a lifetime achievement award for an actor who’s been dogged at upending our expectations for nigh a lifetime in Tom Cruise. I hope there’s more. I almost can’t comprehend how their could be. I thought we ran out of things for Ethan Hunt to jump off of two movies ago.

I love James Bond. Batman. Whatever Dom, Letty and their crew are up to these days. What Marvel has done rivals Zeus and his Olympians. But Mission: Impossible – Fallout just put them all on notice with a paternal pat on the head. Everything they’re doing is cartoon cute. This is now the preeminent action franchise. Everyone else is just smashing action figures together in a sandbox.