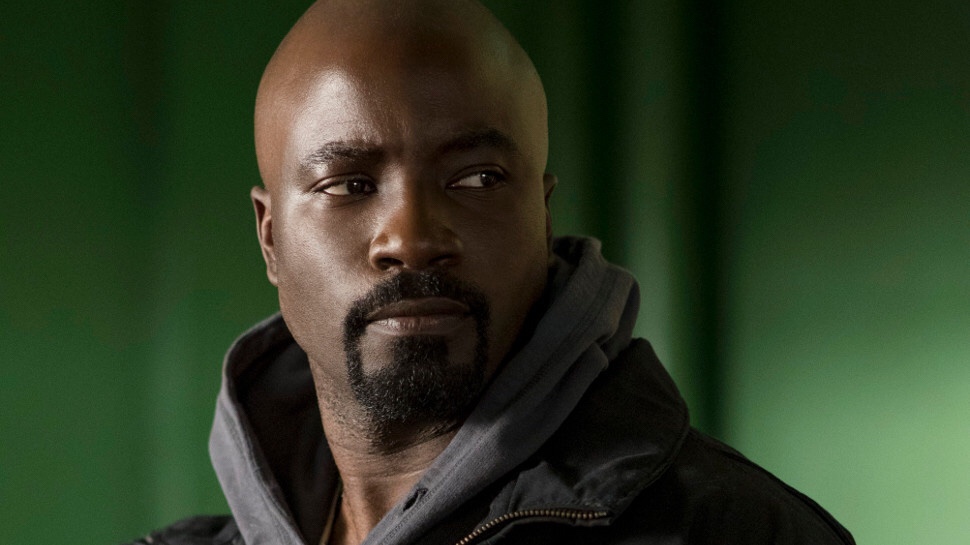 Netflix did it again!

I just wrapped up with season two of Luke Cage and just when I think the Marvel Machine has lost its steam, they deliver on what I believe to be one of their finest television achievements. If you’re looking for an official ranking type thing here it goes; 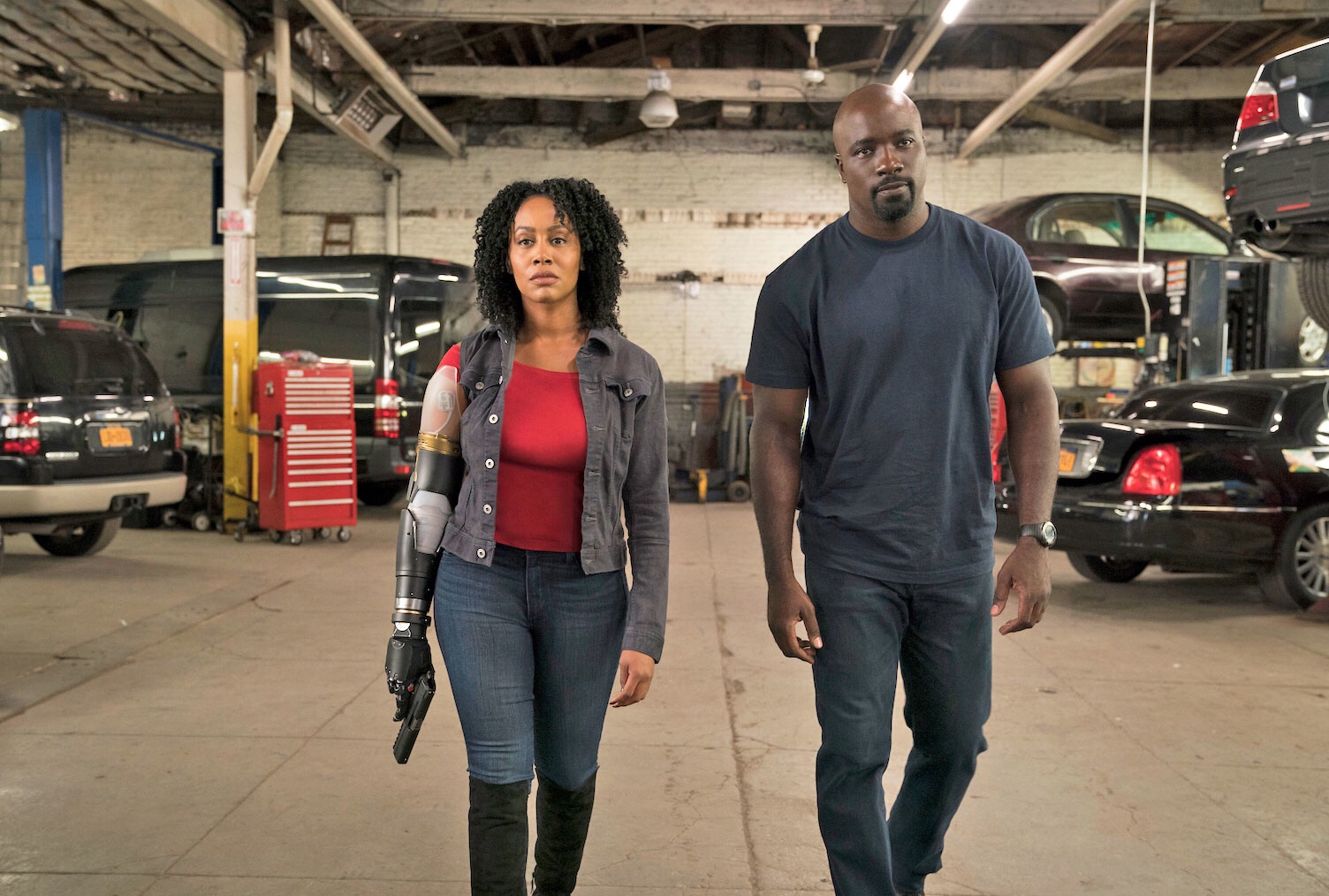 Yes, I believe the second run of Luke Cage is up that high on the list of the MCTVU which is guess is technically part of the MCU but we can table the discussion for another day. There’s something brilliant going on here, whether it be stories you wouldn’t normally see in theaters or my Mike Colter man crush that Disney is doing here. Since I suck at reviews, I’d like to highlight some of the genius behind Luke Cage season two and how it relates to the superhero genre as a whole. Let’s do it!

I’m going to keep it light on the spoilers but know there are some.

Compared to last year I’d say the show is only going up hill. Still at thirteen episodes only this time the effort doesn’t seem as repetitive. You bet there are fights but elevated drama and all around better writing means we’re less reliant on the fisticuffs to push the narrative. Yes, decreasing the number of battles will give the audience more opportunity to get to know our characters. That is a good thing because I feel we’re almost to the point where fight scenes in general don’t have a ton of new ground to break. How many creative way can you possibly film someone throwing a punch? If the audience digs the people in the story, a bad fight sequence could be overlooked.

So yeah… Mike Colter is the man. He has this stoic, vulnerable yet in control, all out stud horse vibe about him you cannot deny. As Robert Downey Jr. owns the elaborate, talkative persona, present on all fronts, Colter is the exact opposite. Why use twelve words when three will do. Dude’s a plus six-feet tall stone cold stunner, I bet he orders pizza from the back of the line. Imagine a less is more approach to your apartment but with a character. When he talks, you listen and when stuff gets emotional, you get emotional. 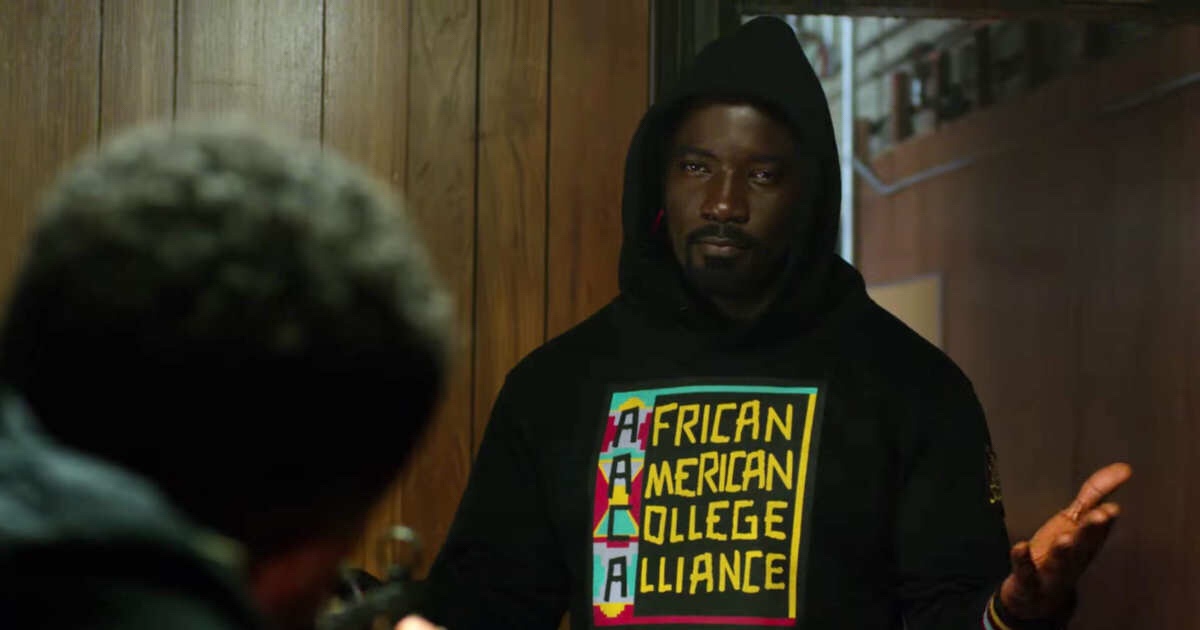 Believe me, season two takes us to places in Luke Cage himself that I didn’t expect to go. We meet his estranged father who walked out on the family years prior. We see the disintegration of his relationship with Claire (Rosario Dawson). There’s a scene where while arguing with his girlfriend, Luke punches a hole in the wall. I know hole punching is a common event you watch on television but here it’s a dark, unconventional twist, used to express pain. The show hadn’t gone this direction until now which adds a great level of depth and complexity to our lead. Cage’s problems become more difficult as the season continues. Early on money poses a potential obstacle for our hero and he takes a job which sets off a chain of events that carries us to the end.

On top of Luke’s personal issues, Harlem is having its own set of troubles. Mariah Dillard and Shades are an item, working to better their situation at the expense of others. They’re first half story arc revolves around the opening of a hospital then shifts to one of “us v them” as they battle the season’s secondary antagonist, the Bushmaster. Who’s he? Only a badass Jamaican played by Mustafa Shakir. He uses natural components from Earth to enhance his strength, make him bulletproof, and use as weapons.

The Bushmaster carries a grudge that was decades in the making. It’s derived from the murder of his family which was committed by a member of Mariah’s family. There’s a flashback centric episode where we see everything. The two sides go back and forth claiming the lives of many. When you reach the midpoint of the season, all of the moving parts come together nicely to set us up for the second half.

The fight between Bushmaster and Mariah’s crew adds significant fuel to the fire but doesn’t take away from the drama between himself and Luke Cage. For being the only two bulletproof men in Harlem you can assume some punches will be exchanged. However, there’s something more than just having them go at it. They see themselves in each other, they have a common enemy in Mariah, yet their moral compasses point in different directions. This makes for a perfect conflict. There’s a scene at the morgue highlights exactly what I’m talking about. 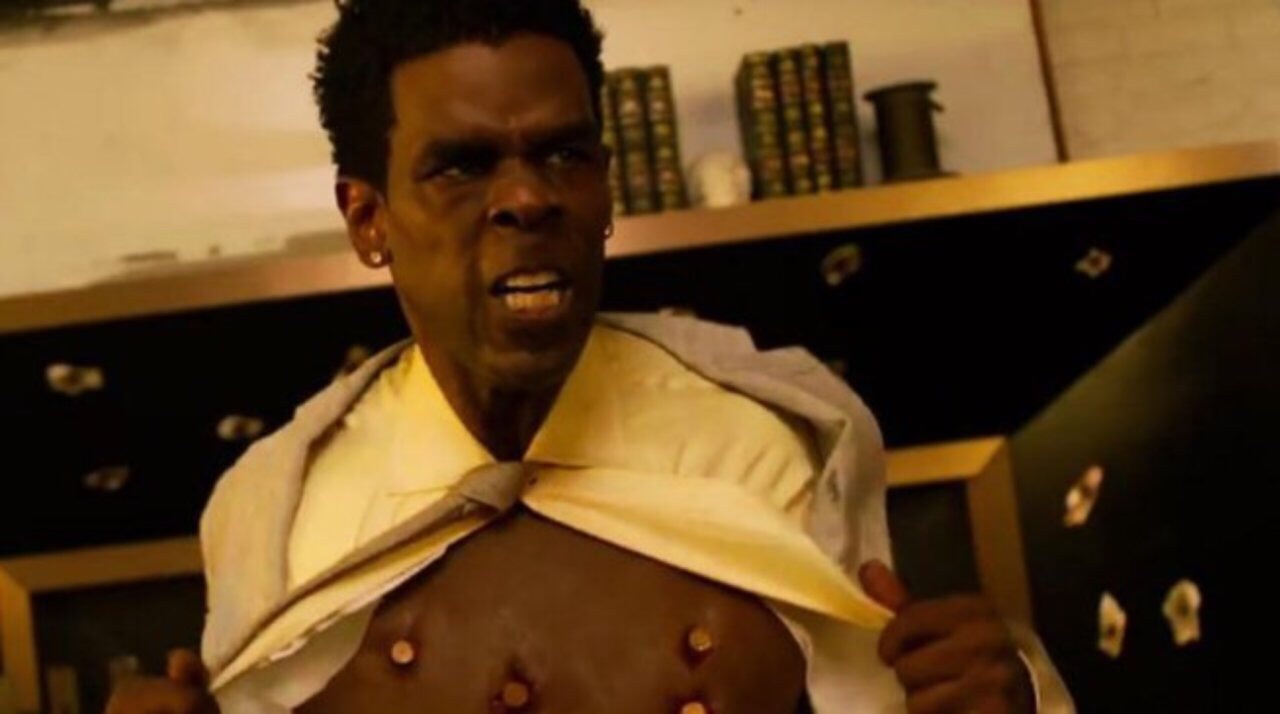 My favorite thing with Bushmaster is how the show uses him. In reality, Mariah and Shades are the true bad guys here. Bushmaster is a challenge for them, Luke, and Harlem. He shapes the characters around him and takes on a role that goes beyond being the muscle.

Also, he doesn’t have the accent in real life.

Of course each of our supporting cast members has their own obstacles to overcome. Mariah’s daughter wants nothing to do with her. Shades killed his best friend, then went full on snitch. Misty Knight is back, and rocking a badass metal arm. These provide a little break from the main plot but do not feel out of place. Iron Fist has a guest appearance in an episode and I kid you not, he was great! When a show can make Danny Rand tolerable, it has to be good.

Where Luke Cage and Netflix’s MCTVU really shine is the fact that it gives us the opportunity to see different kinds of superhero stories. Maybe go to darker places in the world or darker places within the characters. I believe the focus on organized crime throughout these shows is a great route to go. Particularly when it comes to street gangs. We’ve seen the whole mafia thing for years so writing about a different kind of criminal gives a fresh feeling to the MCU. Violence and language might be too much for the mainstream movie going audience but here it’s fantastic. Getting down to the nitty gritty; drugs, hookers, all of it. The model only proves a superhero could work in almost every genre. I’m personally waiting on the romantic comedy featuring Cage and Jessica Jones. When your protagonists don’t need one hundred million dollars worth of CGI for their powers, you could do basically whatever you wanted. Just slap the Marvel title card on there, then relax.

As for the future, who knows if we’ll get The Defenders season two but all of the character’s shows individually, including Iron Fist, are set to continue. Hopefully Luke Cage number three arrives sooner than later, waiting a whole year sucks.

What are your thoughts on Luke Cage season two? Let Nerdbot know in the comments!