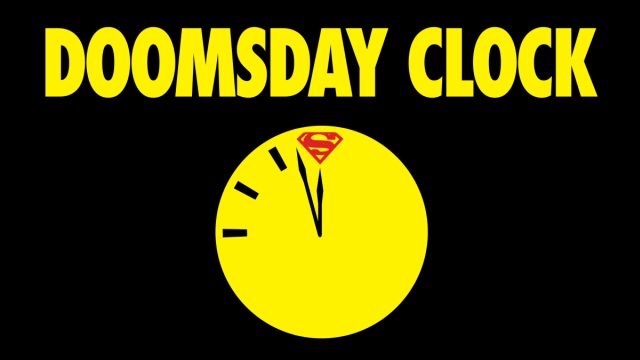 I really hope everyone out there is sticking with DC’s Doomsday Clock. Believe me, I get it. This whole bi/tri-monthly thing sucks and it’s killing me! I find myself having to reread previous issues to remind myself exactly what the hell is going on in the story. It’s a ton of work but man it’s worth it. Personally I didn’t expect to be enjoying the series as much as I am.

By the way I’m totally screwed if Winds Of Winter ever comes out. I’ll have to spend a year simply prepping for another chapter in the Song Of Ice And Fire. I don’t know if I have the strength…

Enough about George R.R. Martin’s close to a decade long Tease Of Thrones, I’ll get into that in a later piece but for now, let’s turn our attention to issue five of DC’s epic Watchmen Integration: Doomsday Clock titled; There Is No God.

Overall this installment really opened up the story to the DC Comic Universe. We got follow ups with each of our central characters plus introduced some interesting elements to the world of Doomsday Clock. Just as an FYI there will be spoilers so if you’re not looking to find out what happens just yet, now is the time to click on a cat video.

We open with Ozymandias. It’s the first time we are seeing him since he jumped out of Lex Luthor’s office window after briefly fighting the Comedian (Edward Blake is alive remember). He’s in the hospital, pretty banged up from the fall. It’s not long before he manages to escape and retreat to Archie where Batman awaits his arrival. The Dark Knight has read Rorschach’s journal then questions Adrian Veidt’s intentions. They have what I would label as a philosophical discussion centered on the consequences of their actions. I was personally surprised how well written and deep the dialogue exchange was. 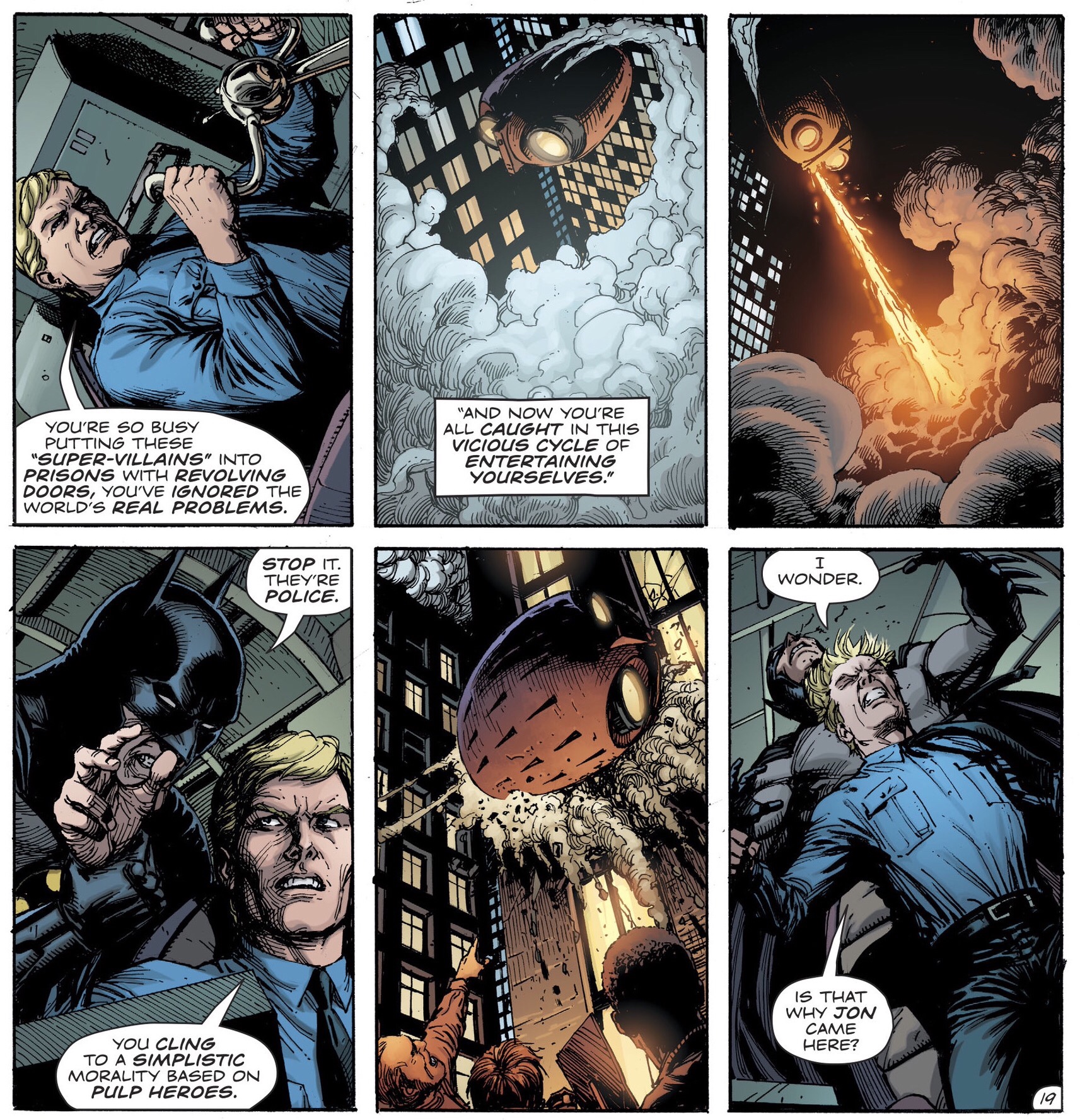 Batman describes Ozymandias’ plot from the original Watchmen as “an illusion that paralyzed the planet” in an effort to falsely elevate Veidt’s status as a hero. Ozymandias claims Batman efforts are nothing more than entertainment and the real problems of the world are left unattended. Eventually words turn to into punches, they battle it out while Archie flies over a massive Caped Crusader protest. Ozy gets the advantage and kicks Batman out of the ship but before the crowd can swallow him whole, he uses his grappling gun to avoid what could have been guaranteed death.

More on the protest in a little bit.

Rorschach, fresh off his stay at Arkham Asylum has paired up with a mind reader who goes by the name Saturn Girl. Still on his quest to find Dr. Manhattan, she suggests a “great big light” may be the key to locating him. That brings us to Johnny Thunder, a one hundred two year old man who escaped his retirement home. After doing some research I found Mr. Thunder is a DC character from the Justice Society Of America which is poised to make a comeback (more on that later too). Thanks Newsarama! 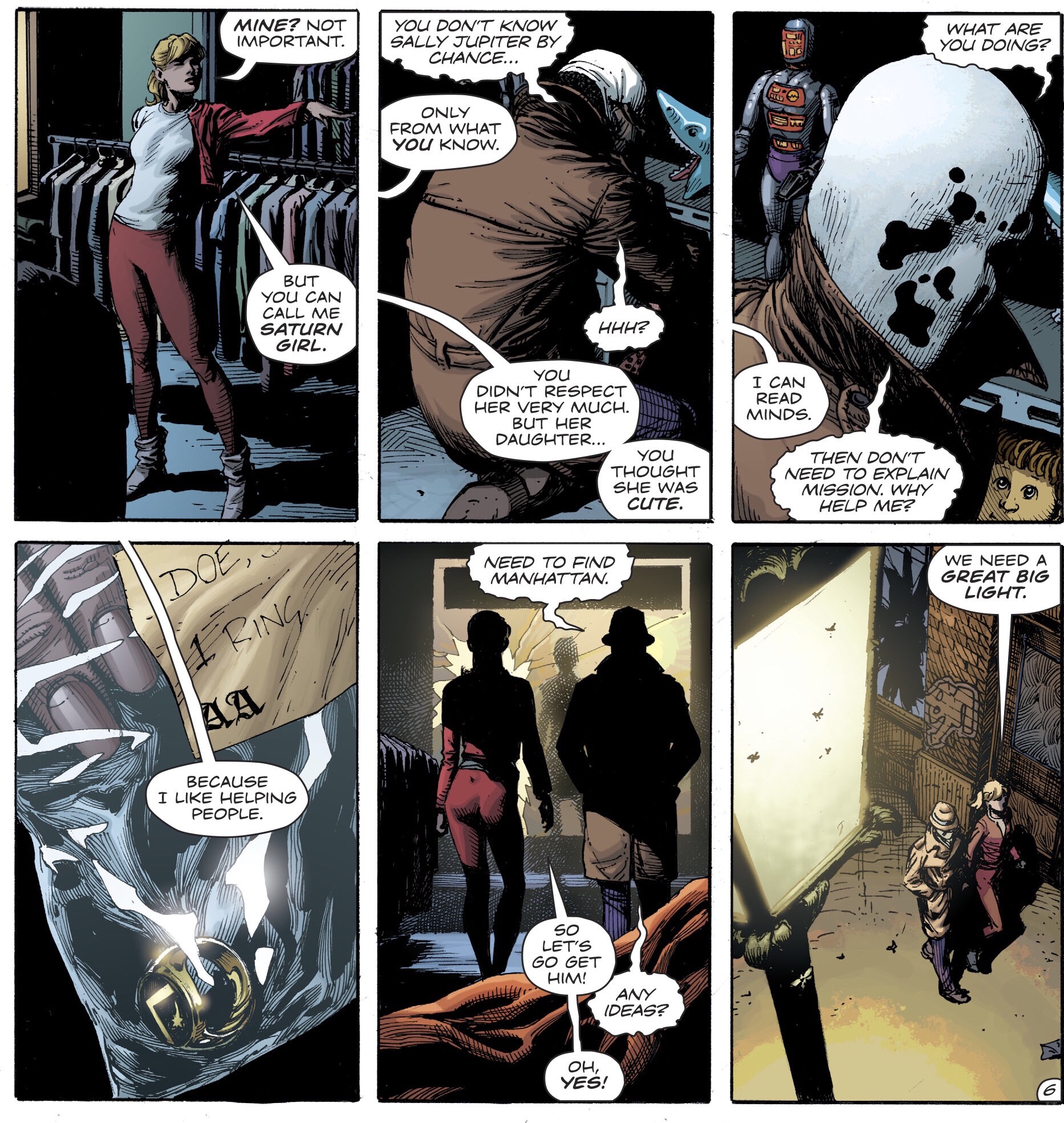 These two subplots provide yet another epic twist when our elder superhero travels to Pittsburgh to retrieve the Green Lantern. Not Hal Jordan, an actual lantern I’m assuming has powers we will see in the future. The stories came together perfectly when Rorschach and Saturn Girl save Johnny from a group of crazy people trying to shake him down.

This could be the vehicle that takes us further and further into DC’s Comic Universe. There Is No God offered several opportunities to expand the story but now that a Green Lantern element has been introduced, God only knows where this could go. When I heard about Doomsday Clock I expected a certain level of Watchmen Integration, like Batman, Superman, possibly The Flash. Something simple and not too broad. More about characters from the original assimilating into a modern adaptation. Dude, I am so wrong, and it feels so good. The series is proven to be a complete Rebirth with every option on the table.

Is the Justice Society Of America set to return? We’ll get there. 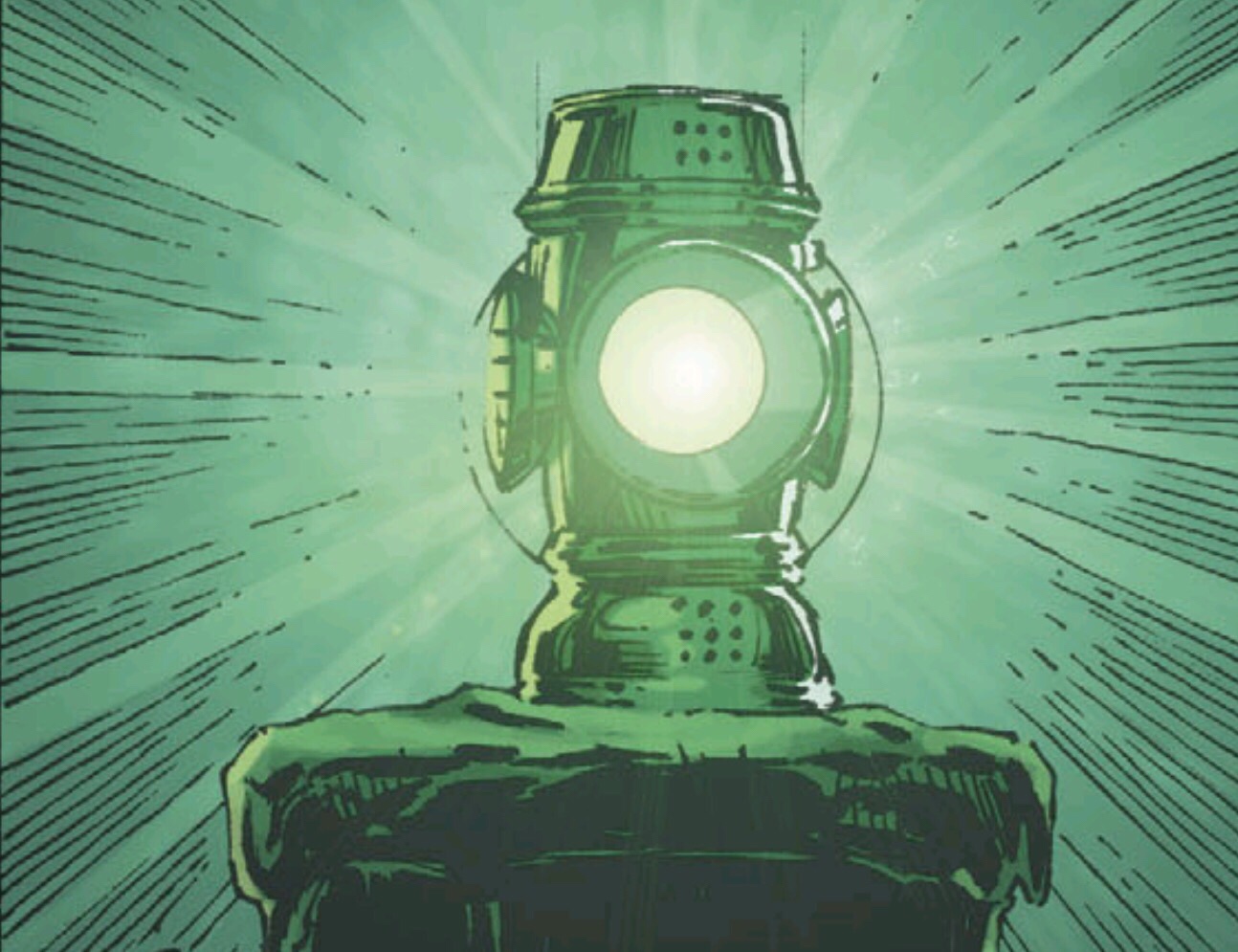 We also pick up Mime and Marionette’s, our face painted tag alongs that crossed over from the Watchmen universe with Rorschach and Ozymandias. They would be like Jennifer in Back To The Future II, characters added to give some extra drama or in this case, provide a link to something we’ve been waiting for since covers of Doomsday Clock debuted online, the Joker. Finally!! As great as it is to have the Clown Prince Of Crime in the story now, the introduction comes in the last two pages and was rather short. Hopefully we’ll get him in true form soon. If you want to talk cliffhangers, issue after issue delivers like Domino’s. Just sucks we have to wait until July to see what happens next. He’s got Batman too! 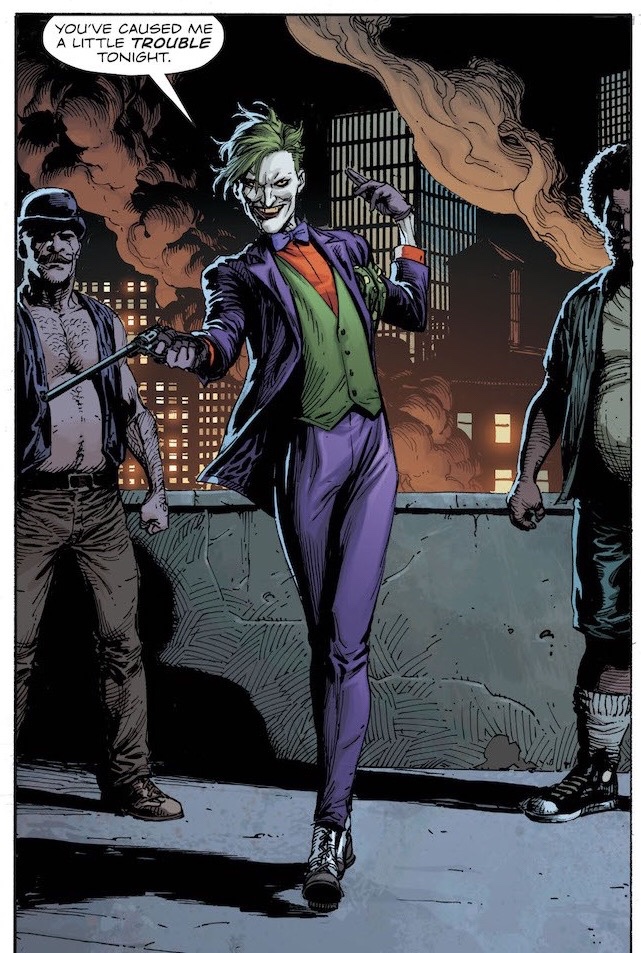 So yes, the Joker is here. Mime and Marionette have been rampaging the criminal underworld of Gotham City, literally been dismembering people trying to find him. A tip leads leads them to the Batman protests which serve as one of the most important parts of the series so far. I told you we’d get there, and now is the time.

There Is No God really illustrates the state of the world, then organically draws drama from a masterly crafted situation. Much like Watchmen, yet Reborn. Geoff Johns follows Alan Moore’s footsteps by replicating the tension between the United States and Russia, only doing it in a way that stays true to the foundation laid over thirty years ago. Doomsday Clock mirrors the original but adds a wonderful twist in upping the stakes in what I would call a Superhero Cold War. Two nations, stockpiling Metahumans in ways one might label as unethical. Lex Luthor (he survived) reveals to Lois Lane that there is some sort of Metahuman production going on and Superman of all people may be involved. It’s subtle, but there’s major implications that could propel the story to a category of genius even I did not expect. 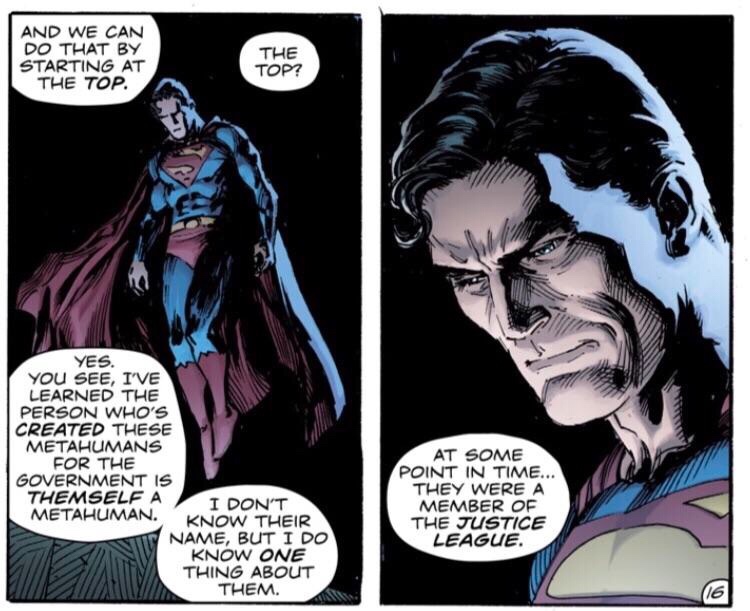 Are Metahumans the new ultimate weapon? Is Doomsday Clock making the same metaphor about humanity that Watchmen did? So many questions! Who knows if we’ll ever get all the answers but now that the floodgates have been opened, there’s no turning back.

I’ll bet this new crop of costumed heroes becomes a Rebirthed Justice Society Of America. Since Doomsday Clock is playing U.S. v Russia card I’m sure we’ll see these guys united under a singular banner. The quote above says “were a member of the Justice League” which makes me wonder if it has disbanded? Moments like this is when I wish I had the remote from that movie Click and could fast forward in time.

Black Adam also is introduced to the story. A violation of international law on his behalf might be the spark which sets off an epic conflict between the world’s superheroes.

Oh yeah… the Comedian is out there killing people. Typical.

So that about wraps this month’s coverage of DC’s Doomsday Clock. Sucks we won’t be visiting the topic again until July (fingers crossed). If there’s anything I missed or if you have any crazy fan theories, post them below in the comments!!

See you next time!

What did you think about the latest issue of Doomsday Clock? Let Nerdbot know in the comments!!