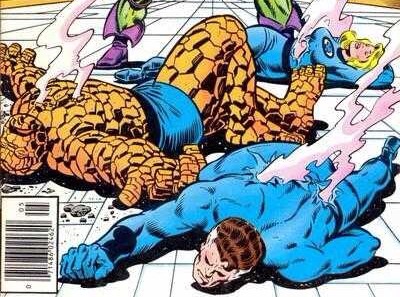 The Death and Return of the Fantastic Four

Once upon a time in the dark ages know as the 1950’s, superhero comics were dead. Despite what Marvel hopes you’ll believe, Captain America limped along until 1954. DC’s heroes fell until the big 3 remained. Wonder Woman was on her last leg. Batman was unrecognizable, fighting monsters and aliens. Really, only Superman survived unchanged into the mid to late 50’s.

Marvel (Atlas at the time), DC, and others found success with monsters, romance, westerns, aliens… Really everything but superheroes. By the late 50’s, heroes were back but firmly in the sci-if genre. Then in the early 60’s, Marvel made history. 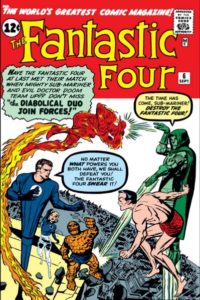 Image: Doom and Namor, 2 of the best villains in literature.

Combing the popular adventure genre with their successful monsters and sci-if comics, Marvel created the first real modern superhero comic: the Fantastic Four. Released in 1961, Stan Lee and Jack Kirby combined the quirky military genre’s flawed heroes with personalities AND the larger than life absurdity of superheroes, using much of their old sci-if and monster comic tropes.

A scientist, his BFF, his love, and her little brother rocketed into space and came back as heroes and monsters.

The Silver Age was turned into a time for higher art in comics. Flawed heroes and family dynamics grew into the Marvel Age, where a villain could be a hero and a hero a monster. This wasn’t new in literature, but Lee and Kirby did it better than anyone had in comics with their ground-breaking run on Fantastic Four from #1 to #102. 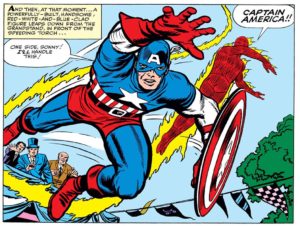 The FF continued with the Thing as one of Marvel’s mascots – alongside Spider-Man and Hulk – until Wolverine’s surge in the 80’s/90’s. Dr. Doom became the best villain in comics. Characters first appearing in the pages of the FF are STILL some of he most important and interesting in the Marvel Universe: Black Panther, Ronan the Acuser, spy version Nick Fury, and Klaw. Hell, Captain America’s return wasn’t really Avengers 4. His 60’s return was really as an impostor battling the FF’s Human Torch in Strange Tales 114.

Skipping a few years… by 1996, Marvel was bankrupt.

To stay alive, they sold movie rights to Sony, Fox, and Universal. The most popular heroes – Fantastic Four, Spider-Man, Hulk, and Wolverine – were quickly snatched up. But that meant that when Marvel started their own studio and then was bought by Disney, they had no choice but to make movies with also-ran Marvel heroes like Iron Man and Thor. The biggest ones were elsewhere.

The hero team that started Marvel in 1961 and literally saved the Marvel reality several times in comics became no more. Issue 645 in 2015 saw the final adventure of Mr. Fantastic, the Thing, the Human Torch, and the Invisible Woman. 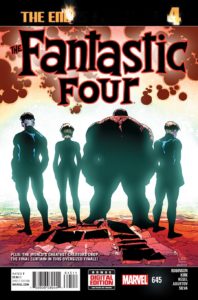 Image: Why I took a hiatus from reading comics.

Thing was hanging out with the Guardians of the Galaxy. Johnny Storm was doing his own adventures with the Inhumans. Spider-Man bought the Baxter building. Reed Richards and Sue Richards were dead, along with their children (really lost and off saving the multi-verse).

All good things must end… Except I’m comics.

Rejoice! The Fantastic Four return! The original family of comics are back starting in August in a regular series from Dan Slott and Sara Pichelli. The first promo image mirrors their last cover, but walking back into our hearts. Not much is known about the direction of the series, but a happy family is a breath of fresh air from all the single moping in comics. 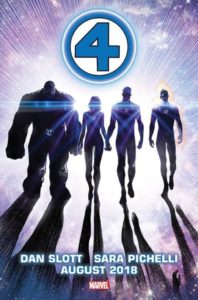 Full disclosure: FF was the first comic I ever remember reading. It’s why I love comics, sci-if, and became a scientist  Marvel isn’t Marvel without the FF and the world of pop-culture is lesser when they weren’t part of Marvel. From the Skrulls to Galactus to Franklin Richards, I’ll always make mine Marvel…

Will you give the original Marvel flawed heroes a chance? When will they show up in the movieverse? Let Nerdbot know in the comments!