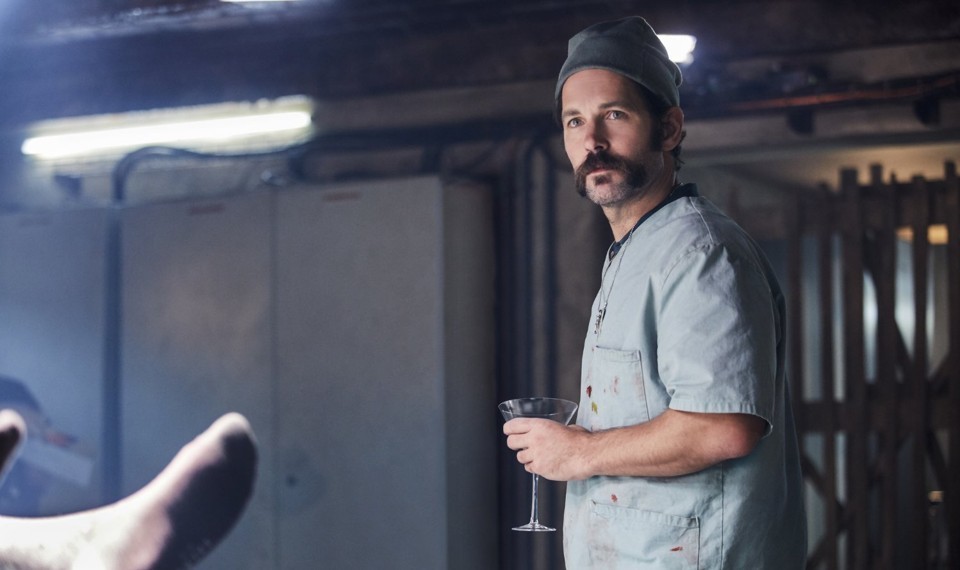 Nerdbot Movie Review: Netflix’s: Mute (And its Connection to Moon)

When I first read that Netflix was coming out with a movie by the director of Moon (Duncan Jones), set in the same universe and with Sam Rockwell returning under a shroud of mystery, I immediately texted my husband and sister, the latter having enthusiastically recommended Moon to the former, and then on to me. My sister texted me back after a few minutes, “Uh…the reviews aren’t very good.” That is putting it kindly. The opening lines of the reviews I scanned contained words like “Failure” “Misstep” and “Disappointing”. I then made the noise a child does when unwrapping a large gift under the Christmas tree to find a lap desk inside.

In my opinion, Mute, Starring Alexander Skarsgard, Paul Rudd and Justin Theroux, is not a bad movie. It’s actually a pretty good sci-fi film. It sets up a world in a not too distant future, with the obligatory flying cars, post-Post Mates fast food delivery and, yes, sex robots. Creepy sex robots.  Mute is entertaining and the performances are top notch, the cinematography and sets are great and so is the dialogue. The movie’s main failing is that it is not Moon. Press implying that this is somehow a sequel is misleading, and the Rockwell leak is distracting. Add on that there is a lot of lore building for a possible third installment, and it’s easy to get pissed off at this movie, despite its good qualities.

Moon was a slow, atmospheric movie that echoed space thrillers like 2001: A Space Odyssey and to a lesser extent, Alien, from the claustrophobic cabin fever down to the suspicious talking computer system. Sam Rockwell is alone on a moon base, counting down the days to his return home when he suddenly starts to believe he is not alone. Is something on board with him? Is the solitude breaking his psyche?

Mute is set on earth. It’s loud, busy, with bustling streets and stuffy prostitution dens.  Harsh neon lights cut through the scummy darkness of the streets of Berlin. Mute hustles through its run-time with robotic strippers, sex and violence and the Amish. It’s a world away from Moon.  The movie more closely resembles Blade Runner or Drive. Theo (Skarsgard) is an Amish man with a childhood injury that left him mute. He has immigrated to Germany from the U.S., as have a lot of Amish apparently. He works as a bartender in a strip club with his blue haired girlfriend who disappears one night. He goes off on a vengeful journey to find her. Meanwhile, in Movie B, Rudd and Theroux play sadistic mob surgeons, and lifelong army cronies in a war that is never discussed. 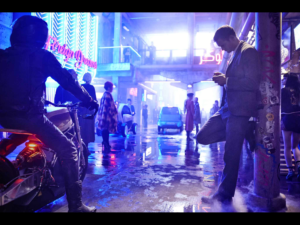 Now, there’s good and bad in the mix here. Skarsgard manages to wonderfully express every scene despite not being able to utter a word. The missing woman revenge quest isn’t terribly original. People have been abducting Liam Neeson’s family for years. And because Skarsgard can’t talk we get little information about why we should care about his girlfriend. I have to add, it’s not clear that she was abducted, she simply disappears, and several people suggest maybe she just bailed on him. It would be helpful to know maybe how long they were dating, how serious they were, but she is quickly established as a manic pixie dream girl and then vanishes. John Wick’s dog had more backstory. We knew how much he loved that dog damn it!

The good is very much in Rudd and Theroux as the boozy mob surgeons. Rudd, adorned with a creepy 70’s porn-stache and a fur lined coat that you can smell from your own home, alternates between rude and obnoxious to dangerously unhinged. Did you ever think one would describe Paul Rudd as intimidating? This is Rudd’s Road to Perdition or Collateral, showing that he can play a cold blooded villain just as well as a goofy Nice Guy. Toting a concealed bowie knife the size of a small child, at one point he explodes in homicidal anger at a casino employee over a couple of loose peanuts.  Theroux, the more contained of the old army bros, is not at all what he seems. Mild-mannered, even tempered, darkness lurks just beneath his placid gazes and quiet words. 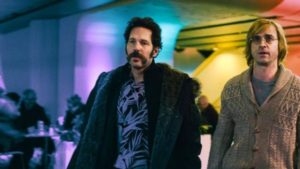 Now, I said before that one of the major flaws of this movie is almost self-inflicted. If you saw the trailers to Drive and thought you were getting The Fast and the Furious, you would have been majorly disappointed. It doesn’t make Drive a bad movie, it’s just not The Fast and the Furious. **Minor Spoilers: If you were expecting a direct sequel to Moon, answers to questions that movie posed, that’s not what you’re getting. Sam Rockwell does return, but not in a way that is meaningful to the plot of Mute. His cameo is more of an Easter Egg, background noise that doesn’t impact the story at hand. I spoil this because if you spend the whole movie waiting for him to kick down a door and say “Let’s go to the moon bitches!” you’re going to be distracted. End Spoilers.

The Rockwell cameo, the odd Amish detail, his childhood injuries and a sub plot about AWOL soldiers are never fully addressed, very possibly just there to serve as prologue for a third installment. The movie feels too invested into detail for these to be simply plot holes. These are some very specific and odd things to put in a movie and never adequately explain the meaning of. This is another snarl the movie runs into: having too much story to tell and not enough time. And it has a lot of time, going into a fourth act after what most movies would consider the climax.  Images, subtext, and complicated gang hierarchy flit like frightened birds in an already crowded room. If Mute had cut out some of the confrontations with under bosses and conflicting flashbacks it would be a lot more streamline and easy to follow. 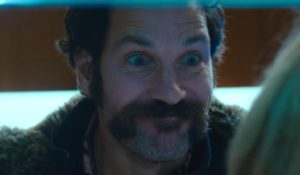 Mute is always entertaining, if confusing. The characters are never dumb for the sake of a plot contrivance, walking upstairs when they should go out the front door. Guns are never used, which makes the fight scenes more compelling, there’s a strange realism to having them duke it out with fists and bedposts rather than prolonged shoot-outs with magically reloading guns. Theroux and Rudd have a charisma that make you want to follow their morally repugnant characters, even while you despise them. If you’re looking for answers, you’ll be frustrated. Mute creates more than it resolves. Guess we’ll have to see if Duncan Jones gets his shot at a third installment.

Did you enjoy Mute? How did it compare to Moon? Did you know the director Duncan Jones is actually David Bowie’s son? Let Nerdbot know in the comments!