Did anyone see the trailer for Jurassic World? Holly macro! The preview starts out with the DREAMY Chris Pratt aka Owen and Bryce Dallas Howard who plays Claire are back at Isla Nublar to save the remaining Dinosaurs, from the looks of the trailer it looks like they are trying to transport the Dinos. 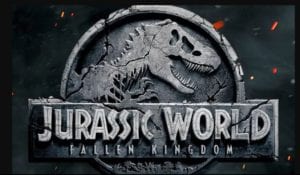 However something goes wrong on the way, hmmm…. kind of reminds me of a certain film called The Lost World: Jurassic Park… and a familiar face from the original Jurassic Park universe returns. Jeff Goldblum will be reprising his role as Dr. Ian Malcolm, representing our lovable dinosaurs in the courtroom. New to the project is director J. A. Bayona know for such film as “The Impossible” and “A Monster Calls.” This would be the first time in a long time where animatronic animals would be use in the film. Jurassic World: Fallen Kingdom looks amazing, a lot of action suspense and stampedes, and including our favorite Dinosaurs, possibly even more than the last movie.