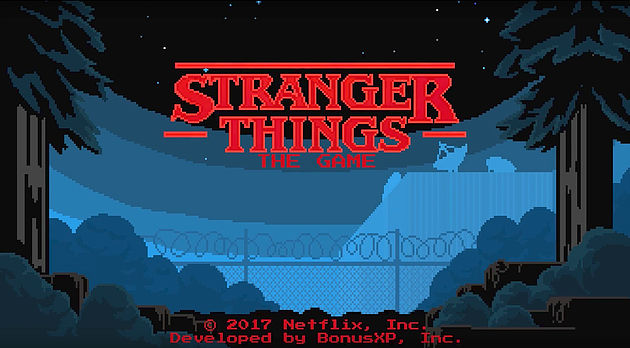 One of the strangest things about Stranger Things: The Game (iOS/Android) is that it’s a promotional tie in that’s both awesome AND free. Anyone who knows their video game history will appreciate this breaks with a long standing tradition that tie-ins have to be awful, started way back in the 80s with Atari’s E.T.

The developers, Bonus XP Inc, have clearly put a lot of thought into achieving the games primary goal of promoting the show, while also making sure it’s a really fun title to play. Probably the most important and inspired decision they made was to wind back the clock by making a decidedly oldskool experience.

The graphics are more 90s inspired than the 80s setting of the show but this was the right choice, keeping it retro without going too far and having things get ugly. They’ve also made the smart choice of utilizing the touch screen technology to keep controls super simple but effective. Everything can be done with a single tap on the screen, which works way better than trying to squeeze in a virtual dPad and a couple of buttons.

The game play will be immediately familiar to anyone who played stone cold classic action RPGs such as Link’s Awakening. This choice of genre is very in tune with the show itself, as fans will know the boys are big RPG fans, with their regular Dungeons and Dragons sessions being a key point of the season one plot.

The developers have also taken inspiration from, or paid homage to, gaming classics such as Maniac Mansion with it’s selection of characters and the Metroidvania style of progression. The Eggos you have to collect and the dips into the Inbetween, meanwhile, are clearly analogous to Link’s Awakening’s crystals and dark world.

The story behind the game is solid, starting mid-way through season one and playing out the remaining story, searching for Will and collecting Eggos when you defeat the bad guys. This serves a dual purpose, engaging the player so that the game play feels purposeful whilst also serving up a handy recap of what happened to get you ready for season two.

There’s also a ton of collectables to keep you exploring the frankly huge world they’ve created for you, and these take full advantage of the fact that while the game looks oldskool, the developers have more toys to play with now than they did in 1984. The best example of this is the VHS tapes that can be found throughout the game; get them all and you get an exclusive clip from the show that you have to visit the in-game movie theatre to view.

The last thing worth mentioning is the soundtrack, which is a pitch perfect chip tune rendition of music from the actual show coupled with classic SFX that would have anyone who didn’t know thinking this game was easily 20 years old.

All in all Bonus XP Inc. have done themselves proud, creating a tidy little package that just screams quality, which makes the fact that it’s free even more amazing. Now go get it and get playing. Scoot! Be off with you!

How are you enjoying Stranger Things: The Game? Let us know in the comments below.