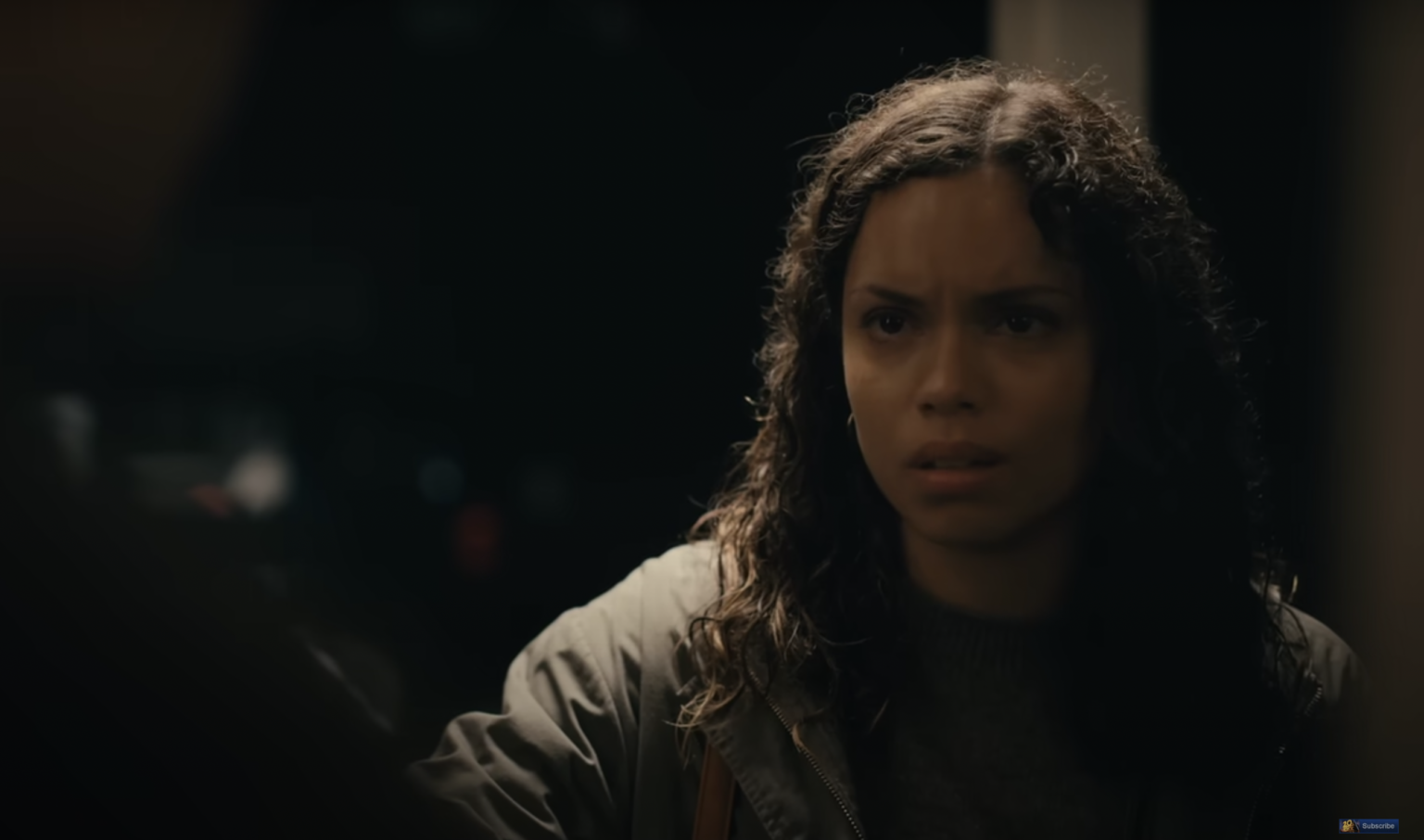 I’m roughly an hour after final credits rolling, and I still don’t fully know what to do with “Barbarian.” It has consumed me long after its conclusion, and solidifies itself as a no holds barred thrill ride that never lets go…even after you leave the theater. It’s one of those films that’s so out there and strange yet rather simple beneath the surface that it’s hard to really capture how it leaves you into words. On the one hand it’s one of the audacious horror films of the year, and that’s saying a lot considering the long list of horror genre entries this year. On the other hand, this is only slightly better than the sum of its parts, relying heavily on a first watch with little value outside of the brief reward for being about to put it all together. Regardless of what hand you want to be fed by, this is a must watch horror film packed with twists, turns, brutality, tension, and most surprisingly, something to say.

Written and directed by Zach Cregger (“The Whitest Kids You Know“) in his directorial debut, “Barbarian” works best when you know as little about it as possible. To keep its secrets, I’ll relegate the synopsis to just what is shown in the trailers. I have to give credit where credit is due, as the trailer reveals next to nothing about what actually happens in the film. This shouldn’t be as big of a deal as it is, but teasers and trailers and teaser trailers and trailers for trailers have gotten out of hand recently, delivering the entire film in about two minutes and giving you nothing to look forward to.

The film has managed to keep its best cards close to the chest, with its trailers showing nothing but the first 10-15 minutes, which is mostly the films opening. Without spoilers, the film follows Tess, a young woman who comes to a small town for a job interview the next day. Arriving to an AirBnb late at night, she is shocked to find that another renter is already in the house. Obviously cautious and against her best instincts, she decides to stay the night at the house with the stranger, locking herself in the bedroom and acutely aware of her surroundings. Of course, nothing about the house is what it seems, and when her double booked stranger goes missing, she discovers that there are far more terrifying things that await her in the basement than a double booking.

That’s about all I can tell you, because anything more would spoil it. The film works best when you know as little about it as possible. There are few movies that are really worth the mystery, but the film’s overall strength lies heavily in its horror games and red herrings. Its primary function is shock and awe, but not in the gorefest, corn syrup flowing way that is often associated with those terms. No, the real shock and awe of “Barbarian” lies more in what it all means rather than what it actually does. Don’t get me wrong, there is plenty of gore to go around, but it is used in a way that never feels like its pandering or resting on the clever camera tricks and horror effects to be effective. This is a film with purpose, and Cregger sets out to accomplish something truly unique and special in a genre that is often stale and uninspired. I’m not entirely convinced that everything comes together the way that Cregger really wants, but “Barbarian” gets a well deserved participation trophy for just going for it without a care of concern for what it should be or should be doing.

“Barbarian” is beautifully shot, with Cregger demonstrating a keen eye for shot composition, and Zach Kuperstein’s cinematography creating some truly haunting and unsettling set pieces and atmosphere. There is a true beauty in the chaos and darkness, and both Cregger and Kuperstein are acutely aware of how to bring these bombastic and out there ideas to life. Even if nothing in the actual film worked, “Barbarian” forces you to reckon with the expert level of filmmaking that helps create some of the film’s most harrowing and memorable moments. I’m not going to go as far as to say that this is a Jordan Peele film, but the craft behind the camera has all the makings of a Peele-esque level final product. “Barbarian” doesn’t waste a single frame nor does it waste a single shot, and much like Peele it uses all of the skills and filmmaking tricks it can to provide a truly stunning cinematic experience even with a limited budget and largely single location setting.

For a film that is so dark and intense (and holy shit is “Barbarian” intense) it is also amazing how well Cregger is able to inject dark humor into an otherwise humorless story. Nothing is forced here, and even though tonal shifts and ever changing puzzle pieces can feel a bit jarring, Cregger seems to be a few steps ahead of everyone else, cleverly utilizing comedy to relieve the tension, but only enough to catch your breath before it dives right back in to asking you to hold it again. Once the film got going, I was on the edge of my seat for the entire film. it is relentless, and breaks for nothing even when it feels like it may be trying to give us break.

Its strengths are elevated by its stellar casting, with Georgina Campbell as Tess being a legitimate breakout star. Campbell shows she is more than capable of doing just about everything, and works hard here to be more than any kind of damsel in distress or genre archetype. I really hope this gives her more opportunities, because her work here deserves it. Bill Skarsgård once again demonstrates why he is the most prolific of his Hollywood dynasty family, adding yet another strange, out of the box performance and expanding his ever growing filmography with another unique performance and role.

The surprise stand out is Justin Long, who returns to horror and gets more screen time than anyone could’ve predicted. That’s not a spoiler by the way, as you can easily look up the cast list and he is show in the trailer. But “Barbarian” is smart to use him late but often, and once he arrives he changes the whole dynamic of everything that is happening in ways you aren’t quite sure how they connect until the final frame. And that’s where all the power lies; it is what is is boiling beneath the surface that matters most, and the root cause of both horrors and trauma collide in a final act that drives the film’s themes home without ever feeling like its breaking and entering. “Barbarian” somehow manages to tackle gentrification, police incompetence, trauma, rape, toxic masculinity, and cancel culture all without ever feeling like the film is about any one of these things. That says a lot about the crafting and execution, because wanting to include any one of those things is a tight rope very few filmmakers would be willing to walk.

But “Barbarian” just fucking goes for it, all in all the time without any care or concern for how far or deep the rabbit hole can go. And the tension and darkness of the seemingly endless tunnels buried under the seemingly quaint and pretty AirBnB digs its fingers into your eyeballs and holds them open like that possessed weirdo in “Birdbox.” Once you start, you won’t be able to stop until it tells you it’s done, and even then it is probably goin to live rent free in your brain for weeks. It is fair to say that this is new horror, an emerging genre that wants to say all the things that drama and biopics and period pieces shout from the rooftops but instead of pretty people have deep discussions in empty rooms, its told through sheer terror and suspense and blood and guts. This will probably be off-putting for some, and I can see the hype train dwindling as more people are able to make their own assessments.

Saying things like “must see” or “best horror film of the year” will always draw naysayers and deniers who would rather take these things at face value and toss it instead of internalizing them and having fair and meaningful discussions about the state of the genre and what “Barbarian” brings to the table. When stripped of all its cleverness and high minded themes and stellar cast, the film is actually pretty self explanatory and basic. But the charm is taking all of the things we’ve come to expect from the kind of horror film it actually is and subverts the expectations to deliver an ever changing, unpredictable moving going experience. It’s not just that the film is incredibly well made or that it is a horror film with purpose, but that the journey it takes you on ends up being far more intriguing and remembered than what it ends up leading to.

That’s not to say that “Barbarian” loses any footing in its third act or conclusion, just that everything is far more meaningful and impactful when you take the blind journey to get to where everything ends up. I can’t stress this enough: do NOT read any spoilers or search endings before seeing this film. It’s not that the reveal is any sort of major event that changes the framework of everything you know. Everything that works here does so when you don’t know what the fuck you’re actually watching. That is truly part of the fun of the film, and you’re better served by just knowing that there’s a film with the name and someone said you should see it.

If that’s all information you have about “Barbarian,” you’re in for a horror delight. I don’t know that I can go as far as to say it’s the best horror film of the year but I can say it is the most unexpected so far and that it is one of the more impactful and meaningful horror films I’ve seen all year. People are going to be talking about this film, and expect a plethora of film twitter discourse about the meaning of it all and “is Justin Long’s Character Really that Bad of a Guy” incel youtube reviews. For what it’s worth, anyone taking this stance (that includes incel gods like Joe Rogan and Elon Musk) is categorically wrong, but I think that’s why “Barbarian” exists and why it puts so many of these themes front and center without assaulting viewers with them.

“Barbarian” is ambitious, bold and bonkers, ushering in a new wave of high minded, clever horror films that use the built in tropes to its advantage and as an unlikely vehicle to get more important things across.

Add this one to the list of great horror films in 2022. The list just keeps on growing, and this film earns its place among the elite. If this is where horror is headed, I may just have to become a fan of the genre.

“Barbarian” hits theaters September 9th. You can watch the trailer below.