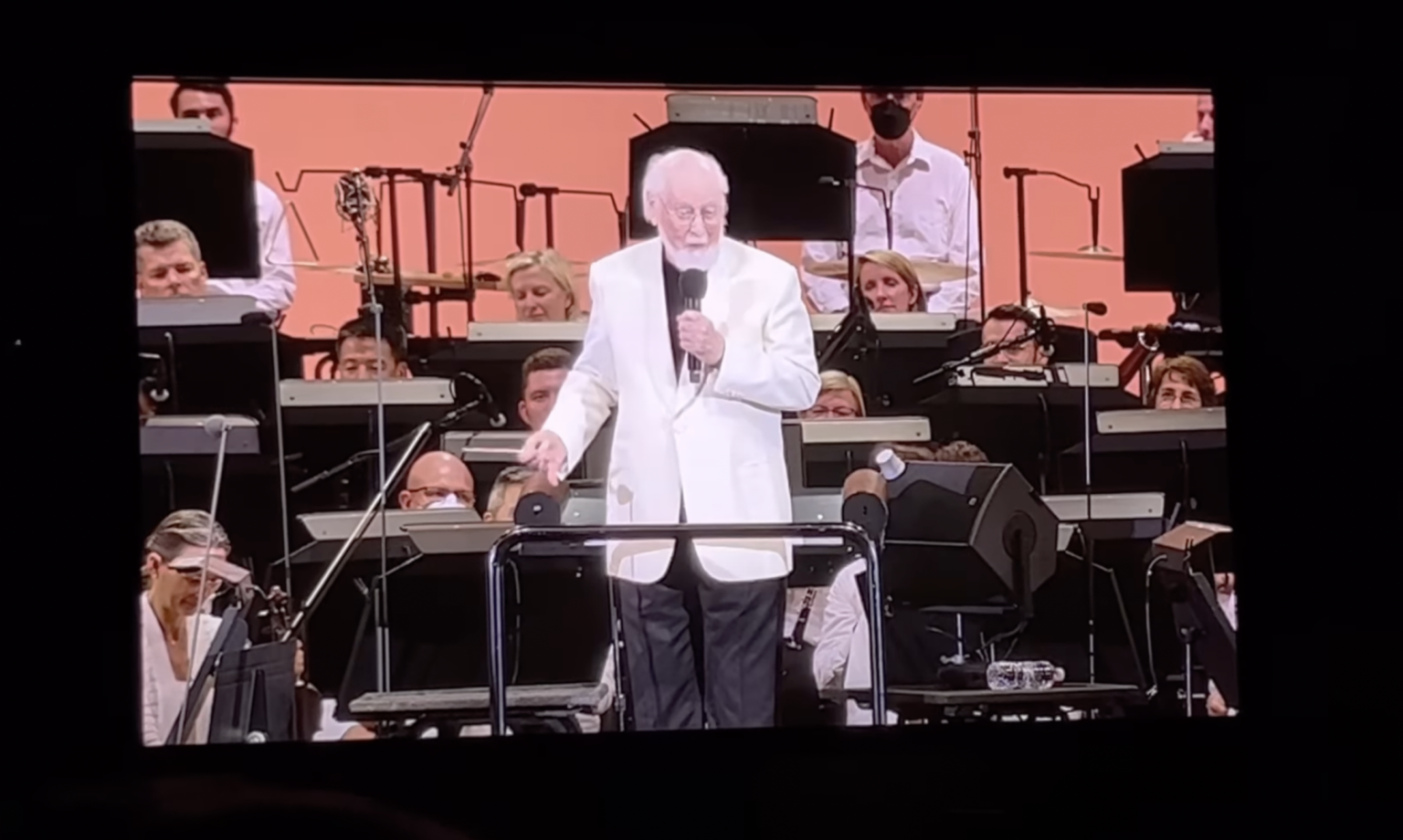 Celebrating 90 years of life, acclaimed and prolific composer John Williams returned to the Hollywood Bowl this weekend. I was fortunate enough to get a chance to see the performance with the Los Angeles Philharmonic, and it was truly a once in a lifetime experience. Williams’ scores not only conjure up unforgettable movie imagery as you listen and watch the strings sore over the melodies, but tug at the heart strings of what makes films truly magical. We often forget how integral scores are to film; a good score can make or break climatic and powerful moments, and serve as the instant reminder of unforgettable movie moments. Williams has been a part of the some of the most influential films and franchises in film history, composing for over 60 years and giving us unforgettable ear candy like “Jurassic Park,” “Close Encounters of the Third Kind,” “Jaws,” “Harry Potter,” “Indiana Jones,” and of course, “Star Wars.”

And that’s just a fraction of John Williams‘ filmography. So celebrating his music and being able to watch him conduct some of the best musicians in the world playing some of the most memorable film scores in history. The show began with guest conductor David Newman (“West Side Story“) who lead the performances of some pieces curated by John himself. The performance opened with a dazzling “Tribute to the Film Composer,” that walked through over 100 years of film scores and really set the stage for how meaningful scores are to film. There is a palpable joy and magic in the air as you listen and watch these musicians guide you through a mystical journey of make believe. Honestly, the shows first piece served as a reminder for how much I genuinely love movies. I know everyone thinks that because I’m a critic my whole career is hellbent on hatred, but that couldn’t be farther from the truth. I absolutely LOVE movies, and Maestro of the Movies made me feel 5 years old again watching something on the silver screen for the first time.

After about an hour of pieces from the guest, we had a brief intermission and the man, the myth, the composing legend took the stage. Williams’ carries himself as a man who genuinely loves what he does, and as he took his place on the podium he was taken aback by the 3 minutes standing ovation. I’m sure this happens every show, but Williams’ is kindhearted and gracious in his persona on stage, and thrived off the energy and love pouring out from the sold out crowd. In addition to the actual performance, Williams’ was extremely engaging. He consistently spoke to the crowd and shared antecdotes about how the pieces came to be and what they mean to him. Just another layer of engagement added to an already layered and deeply engaging performance.

Though the whole evening was special and unforgettable, There were 3 moments that really stood out to me in addition to Williams’ warm and engaging demeanor. The first was the violin solos from acclaimed first chair Bing Wang, who performed signature movie classics of “Schindler’s List” and his arrangement of “Fiddler on the Roof.” She actually made her Hollywood Bowl debut under the baton of Williams’ in 2005, performing these pieces then for the first time. Wang is a master of her craft in every sense of the word, and watching her perform these incredibly complex piece with unchallenged confidence and intimacy was a sight to behold. I was truly in awe of Wang’s skill, and watching her and Williams’ bring gorgeous music to life, mouth agape and heart full of emotion. Powerful, powerful stuff and a performance I will remember forever.

The second moment was being able to get a sneak peak of a new piece from “Indiana Jones 5!” The piece is titled “Helena’s Theme,” written for Phoebe Waller-Bridge’s character in the upcoming franchise entry. Williams’ once again proves that even at 90 years old, the man is one with the composition and is deeply in tune with how to create music that brings movies to life. It is a beautiful piece, and while I’m not too keen on another attempt at Indiana Jones, at least I can be put at ease knowing that Williams’ score spared no expense.

The third moment that stood out was the electricity and explosion of cheers and glowing lightsabers that filled the open night sky when the “Star Wars” pieces began playing. I know everyone says you just had to be there, but seriously, you just HAD to be there. Pictures just don’t do it justice, watching thousands of multicolor lightsabers shoot into the night sky as those iconic opening notes explode into the quiet night air. 17,000 fans, families, children, nerds, musicians and more all coming together, united by the magic of strings and horns and drums. It is the power of music and magic and movies wafting over the open air row by row in the historic Hollywood Bowl, and a moment that truly filled me with emotions of joy and wonder.

John Williams Maestro of the Movies is an unforgettable experience, packed with many memorable moments and a stark reminder of just how beautiful and wonderful movies can be when captures by legendary music compositions. Movies are better with music, and we have Williams’ to thank for not just a magical evening, but decades upon decades of legendary, musical movie magic. If you ever get a chance to see the show live, I highly recommend it!

After another long applause/standing ovation, Williams’ told the sold out crowd, “If you guys are going to be that nice to me, I’m gonna have to live to 100.”

Let’s hope he keeps this promise.