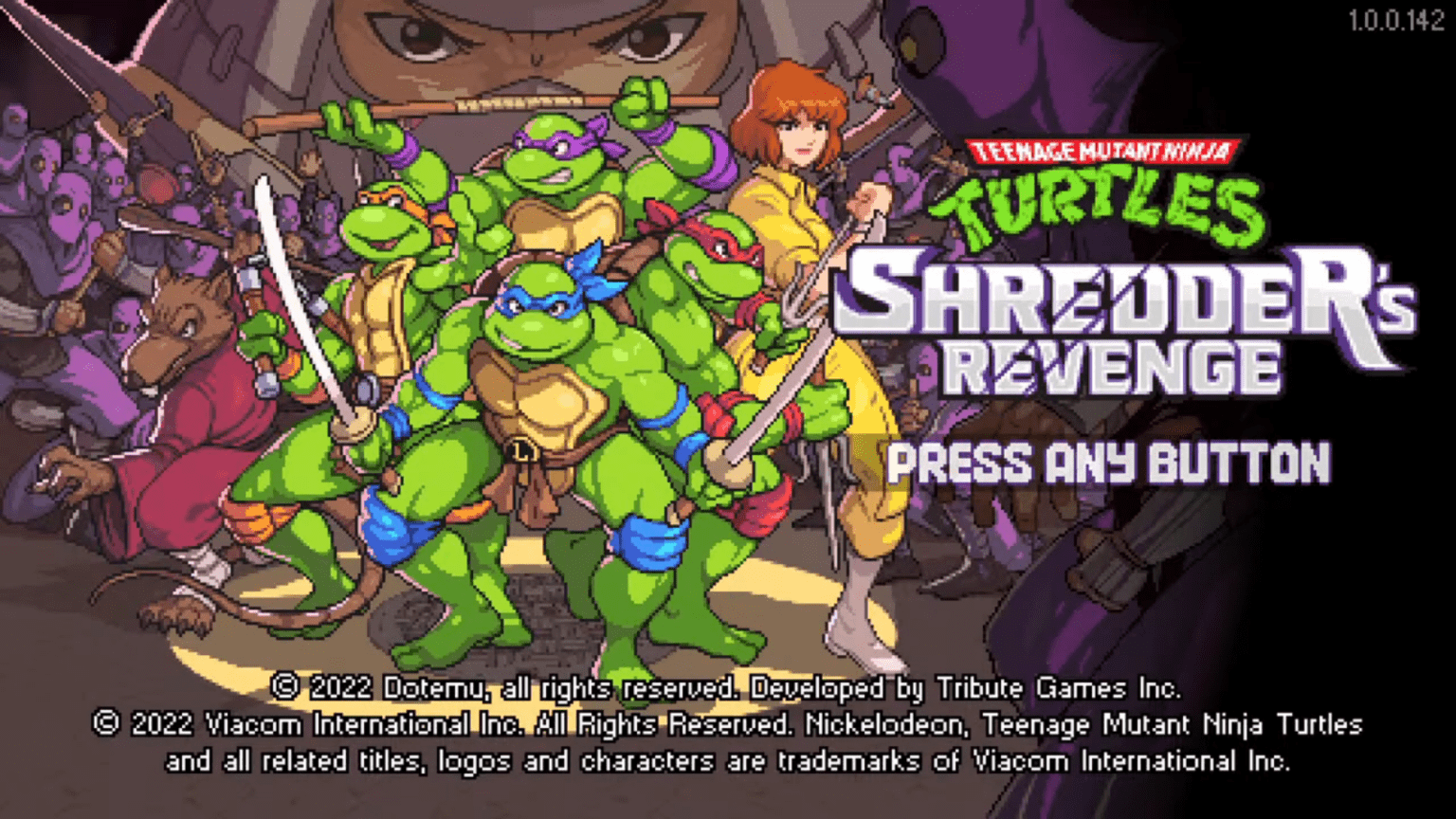 Tribute Games and Dotemu have released upon the world a new Teenage Mutant Ninja Turtles video game in 2022. While there have been a number of games in the franchise over the years since their original outing on the NES in 1989, there are two releases that loom large in fan’s memories. The original arcade game, also released in 1989 and ported to the NES in 1990, as well as “Turtles in Time“ that hit arcades in 1991, and the SNES in 1992. It’s these titles that Tribute Games aimed to draw inspiration from to create a new, yet familiar experience with “Teenage Mutant Ninja Turtles: Shredder’s Revenge.”

By all accounts, review scores have been very high for the game, but does the new TMNT game live up to that hype?

Along with being a life-time Ninja Turtles fan, I am also one of the few people who will tell you the original NES game people hype up the difficulty of is not THAT hard. I have played virtually every Turtles game across every console and handheld generation, and am a proud owner of the TMNT Arcade 1-Up machine that houses the 1989 title, as well as “Turtles in Time.” So needless to say, I know what I expect and want out of a TMNT release and how it should play.

That said, I’ll cut to the quick; yes, the title does live up to virtually all of the hype, with a mild quibble or two that I’ll get to later. For starters, let’s talk about the game’s aesthetic. If you were a fan of the original ’80s cartoon, then this title was pretty much made specifically for you. The original Turtles voice actors were brought back for their respective roles. Cam Clarke as Leonardo, Rob Paulsen as Raphael, Townsend Coleman as Michelangelo, and Barry Gordon as Donatello. The rest of the cast of the cartoon isn’t represented here but to just have even the main foursome back is a welcome perk.

To go along with this, all of the characters are modeled significantly after their animated counterparts, from the heroes to the villains to the cameo appearances from characters like Irma, the Neutrinos, and Vernon Fenwick. The attention to detail goes so far as to when Irma references a specific episode of the series when she turned into a giant. That’s going above and beyond. Tribute Games knew who they were making this title for and they went all in on that demographic. The 1987 Turtles cartoon has never been so accurately represented in a game as it is to the degree here. Even the look of the title is beautiful; though the graphics are clearly done in a retro way, they are some of the crispest, fluid, and colorful throwback visuals you’ll ever see.

None of this would mean a lot if the game didn’t play well, but good lord does it. The movesets of the characters strike a balance between simple and varied. You have more options to tackle the Foot Clan here than you have in other games, but it’s not so complicated that you’ll forget about certain moves or need to look back to the tutorial for help. You can attack, dash attack, slide, throw foot soldiers towards the screen, slam them around, do various jump attacks, and execute them all with precision. An important addition is the use of an area of effect super move that can be done after building up its meter through a taunt or combination attacks. It’s a game changer when it comes to controlling a crowd of combatants or doing heavier damage to a boss.

The roster of characters here includes the four turtles, Splinter, April O’Neil, and an unlockable Casey Jones. Each of them plays slightly differently too as you can really feel the difference in their quickness and power. For a change there’s more to picking Donatello because his bo has more range; you could easily power through the game on the strength and speed of Raphael’s sais. As for the villains, you’ll be going up against virtually every main enemy from the Turtles rogue gallery, including ones you may not remember (Tempestra, anyone?). So alongside foot soldiers, mousers, Roadkill Rodneys, and Krang’s rock soldiers, you’ll also fight Bebop, Rocksteady, Baxter Stockman, Leatherhead, Wingnut, Dirtbag, Ground Chuck, and others. Basically, all the big names are represented here across 16 levels.

That amount of levels is really the only sticking point with this title. There are two ways you can play through the game, story mode and arcade mode. Story mode has you going from level to level on a world map and completing optional objectives for more points. These points level up your character and allow them access to more moves, health, and power attack bars. Arcade mode cuts out the optional objectives, map, and leveling up and just puts you through the gauntlet of all 16 levels back to back. My arcade run through took me about an hour and forty minutes to complete, story mode took me about an hour longer on my first time.

This puts the game in a weird place where the number of levels is too long for an arcade run through and a little too short for a story mode. Arcade games have to strike just the right balance of length since they’re non-stop experiences without an option to stop and save. “Turtles in Time” for example can be beaten by speedrunners in 20 minutes. For an average person it may take closer to 50 minutes to an hour; a good length. An hour and forty though is really pushing it. All the levels are really well designed, so you don’t want to take any of them out, but it would serve the arcade mode better if perhaps there were branching paths, so not all the levels are played in one setting. Additionally, it could give replay value as you play through it again and take a different set of levels the next time. Or if you want to run the full gauntlet, you could still have that option.

Story mode on the other hand would benefit from some additional levels or side-quests. In addition to the side-scrolling beat ’em up levels, it might help to have some sub-levels where you fight off waves of enemies or complete a boss rush. Or for those playing single-player, have a bonus level or two where you fight off the Foot alongside an AI controlled companion, in order to give you the feeling of playing with others. The title is up to four player co-op locally and six players online, but if you don’t like the hassle of human beings or being online, an AI bot would be a nice substitute. Something of the sort to expand what the story mode can bring would help differentiate it even more from the arcade mode and offer some distinct challenges. Speaking of challenge though, you don’t have to worry about this game being too difficult; the optional difficulty modes have things well-balanced to where you don’t have to worry about the game being frustratingly hard or too easy. No more nightmares like from the dam level back on the NES.

Finally, we have to talk about the soundtrack because it’s fantastic. Tee Lopes composed the music here, which at times gave me a kind of “Sonic Mania” vibe. Turns out that’s fitting because he did the soundtrack for that too. It’s incredible. The music here from start to finish is pumping. There are throwback leitmotifs to the boss battle theme from “Turtles in Time,” to the original cartoon series, the 1989 arcade title, and some completely fresh sounding tunes to boot. It’s pulsing, rhythmic, and is somehow both familiar and excitingly new. It sounds like it should be part of a Ninja Turtles game and belongs here. That is to say, if you heard some of the songs in another title you would think, “Huh, this sounds like it could be from a TMNT game.”

So yeah, “Teenage Mutant Ninja Turtles: Shredder’s Revenge” lives up to the hype.

It is arguably better than its arcade brethren and certainly one of the best beat ’em up titles of all time. This is one of those games that will only grow in its legacy over time as simple yet engaging. When gamers talk about titles like “Final Fight,” “Streets of Rage” and other classics, “Shredder’s Revenge” will sit right alongside them; it really is that good.