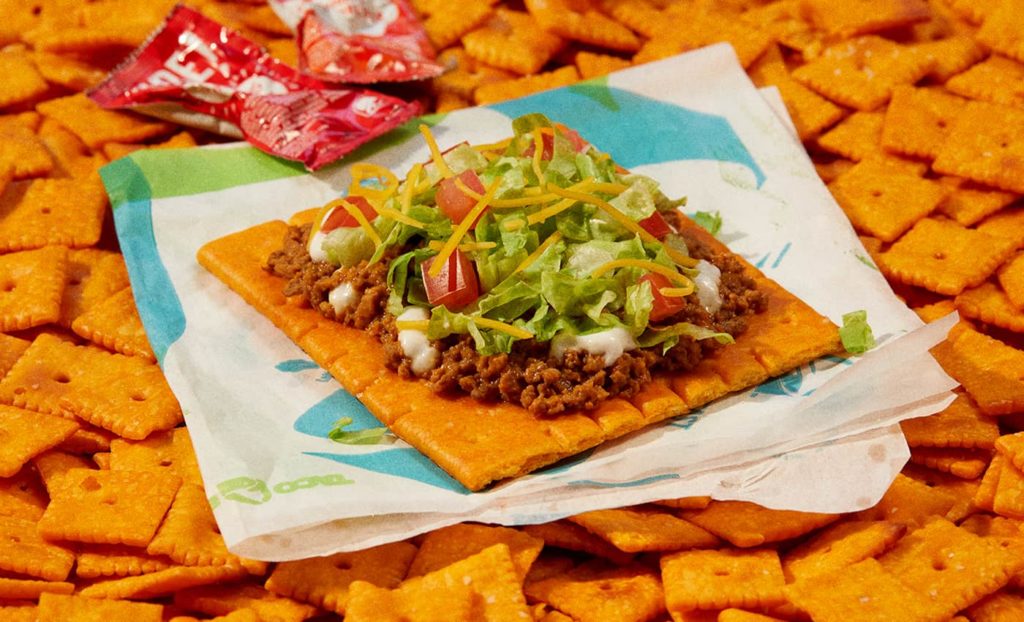 By this time, we’ve all heard the famous phrase uttered by Jeff Goldblum‘s character of Dr. Ian Malcolm in the first “Jurassic Park“ film. “Your scientists were so preoccupied with whether or not they could, that they didn’t stop to think if they should.” That statement is now aimed squarely at Taco Bell, and the monstrosity they’ve just created. From the company that brought us taco shells made out of Doritos, we now have a tostada made out of a giant Cheez-it cracker.

Pictured above are some non Cheez-it tostadas. It’s pretty simple; a toasted or deep-fried tortilla upon which any number of ingredients can be placed in order to make a meal. But that wasn’t enough. It wasn’t bold enough or snacky enough for mankind. We had to take it further and push the boundaries of what our culture, nay, our civilization could endure. And thus, we have what you see below.

Yes, that is indeed, a giant Cheez-it cracker. According to the official Taco Bell website, it is in fact, 16 times the size of a normal Cheez-it. “Be the change you want to see in the world.” Someone said that to themselves and yet they still created the giant Cheez-it Tostada. The official list of toppings is seasoned beef, reduced-fat sour cream, fresh diced tomatoes, crisp lettuce and shredded cheddar cheese. Naturally it has to be reduced-fat sour cream because when you’re eating a giant Cheez-it, you’ve got to count calories somewhere, right?

The Cheez-it tostada can be yours for $2.49 while the Big Cheez-it Crunchwrap Supreme will run you $4.29. There is a catch to all this. Well, a catch besides you dooming your soul for all eternity by partaking in this scientific abomination. Both of these menu items are only currently available at one Taco Bell location in Irvine, California. Additionally, they’ll only be there for up to two weeks or until supplies last. When it comes to novelty food, you should probably err on the side of the “until supplies last” part.

All kidding aside, it does seem like an interesting idea and one that doesn’t stray too far outside the realm of things Taco Bell has already attempted. And as anyone who’s a fan of traditional Mexican cuisine will tell you, if you’re looking for serious Mexican food; what the hell are you doing at a Taco Bell to begin with? Anyway only time and sales figures will tell us if the giant Cheez-it strategy gets rolled out nationwide but until then, if you’re in Irvine, try a giant Cheez-it while you can!