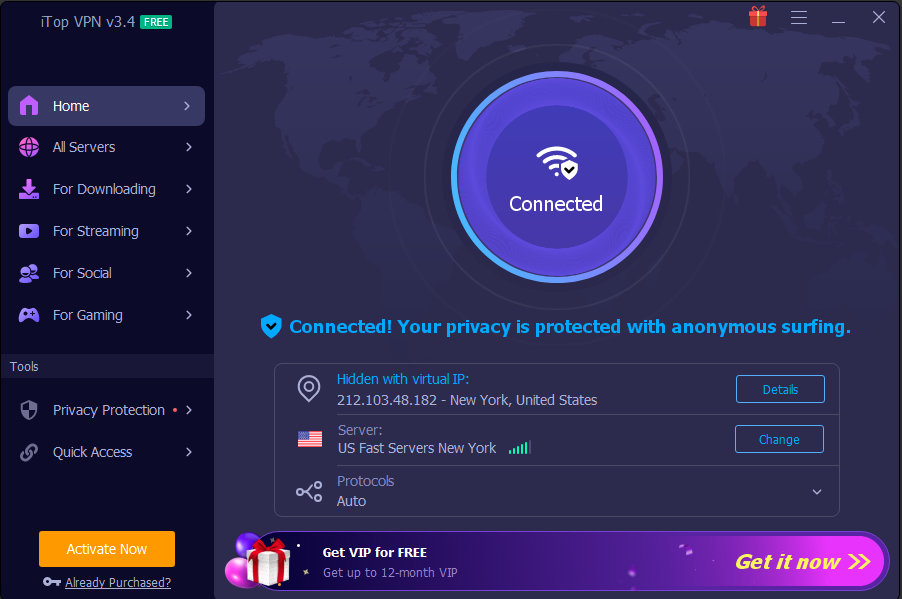 iTop VPN is a virtual private network service originally introduced in 2016. Although it’s not new, it failed to have sufficient time to adapt to the market like many of the larger competitors over the past 5 years. Still, this product gets a lot of things right and has a multitude of advantages that make it a worthy recommendation.

For example, it offers a user interface that allows ease of customization over a VPN experience. The speed is also relatively fast, providing enhanced security with critical features like a kill switch. Yet, it does not offer the ability to torrent, its support system is subpar, and it does not provide the same array of encryption protocols.

When utilizing nearby servers, the speed for daily safety and use for anonymity is quite decent. It is good enough to provide a meaningful benefit for those that desire to enhance their privacy and online security.

iTop VPN uses its own custom encryption protocols through a proxy to protect users. While it doesn’t provide the most cutting-edge security, it still shields data very well. Its developers follow a strict policy against logging and provide a kill switch upon an abrupt loss of internet connection. These encryption protocols happen at the HTTP, TCP, and UDP levels, and the service ensures protection for the DNS, browser, and general device.

Of the three protocols, TCP is a widely used layer protection system. However, iTop VPN’s version differs from the standard that many competitors work with. UDP works together with TCP to provide increased network speed. Finally, HTTP is a way of protecting the transfer of data from one device to another.

The interface is quite simple to use, despite the fact it’s more crowded than most other dashboards in this tech niche. Although the site may confuse certain people, and the process of installation may seem somewhat complicated, it’s all very well put together. Overall, the design is modernized, users can rapidly toggle between the added security features, and it does not require a user login.

Costs related to the premium versions of iTop VPN differ from the norm. It’s one of the few existing VPN services that offer a version that’s absolutely free and available for use by anyone. Yet, it’s not a viable alternative for the long term if you desire to stream content online because you aren’t provided unlimited bandwidth.

Traffic on the free version of iTop VPN is limited to 700 Mbs per day for anonymity. Very few other services offer such immense value upfront. However, if you desire additional functionality, you’ll need to subscribe to one of the paid plans. All tiers are below average market prices, and each of them provides a money-back guarantee for up to 15 days.

Users do not receive phone support or live chat, so a ticket must be submitted. But the good news is that the response time is fast, usually only taking up to 24 hours. Acquiring a subscription allows the use of the VPN on many popular platforms.

Dedicated servers provide users access to the majority of popular online activities, including the latest releases for Netflix to playing games in specific countries.

iTop VPN is a fairly well-put-together free VPN with a massive network. You’ll find it to be one of the most affordable for long-term commitments. Servers make it simple to use for specific purposes.