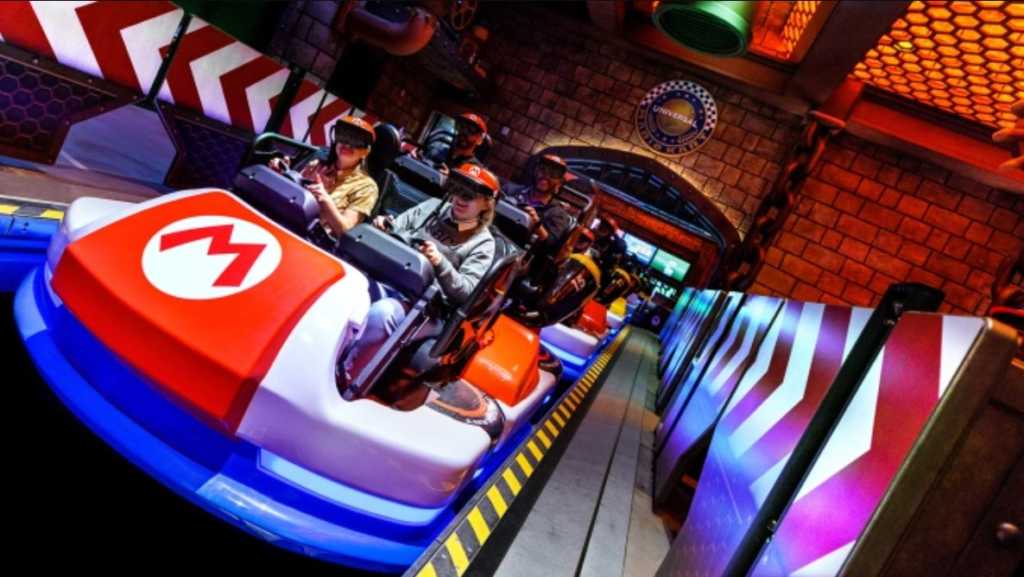 Universal Studios Hollywood decided to preview their upcoming Super Mario World. A new ride called Mario Kart: Bowser’s Challenge will be available opening day. Universal is calling it one of the world’s “largest, most interactive” rides to date.

When you enter the Nintendo-themed land, you start by going through a giant Warp Pipe. This ride will be stationed inside Bowser’s Castle, and is based off Mario Kart. The ride’s vehicle seats four people. A headset with augmented reality goggles will be given to each rider, and you’ll watch a countdown till you start the race. While on the ride, you will be able to steer through courses underwater, and in the clouds, all while competing for the Golden Cup! And don’t forget to collect those coins; they’ll will increase your score at the end just like in the actual games.

Universal Studios promises “a multi-dimensional experience that recreates iconic environments from the Mario Kart games.” Our guess is that with the muti-sensory colors, sounds and movements, you may get a little bit dizzy when you slip on in-game bananas. The theme park says the ride will appeal to guests of all ages.

The Japan park has been open in Osaka since 2021, and it’s been a real hit. Fans of Super Mario have been waiting for the US version to open. Mario Kart: Bowser’s Challenge is going to be one of the rides people want to get on most. In Japan, they have a similar ride called Koopa’s Challenge. If you want to see footage of the whole park in Osaka including the ride, we recommend watching this video.

Universal Studios Hollywood opens the gates to Super Mario Land in early 2023. Check out the preview below.