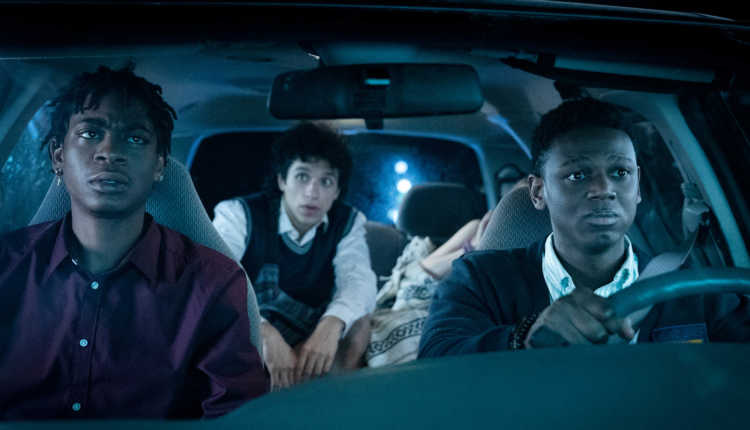 “Emergency” Buddy Comedy with Something Important to Say [Review]

It is rare to find a film that is both a college-night comedy and commentary on race in America. Not that you can’t have those two things in a single movie, but it is incredibly difficult to balance them in a way that doesn’t overshadow or undercut the other. “Emergency” is that lightning in a bottle film, beautifully told story about friendship and growing up through silly antics while smartly sneaking in its more introspective social commentary into each changing event. It is as funny as it is purposeful, and speaking as someone of mixed race who identifies tremendously with minority expectations, “Emergency” resonated with me on a much deeper level than I would expect most viewers. But that’s the mastery of this film. It taps into into deeper levels of race and other complex issues without ever losing the humorous vehicle it chooses to get those ideas out.

The film is classified as an American satirical thriller (according to Wikipedia), and while it is most certainly thrilling I don’t know that I would classify it as a thriller or even satire. It has all the biting wit and pacing of those things, but going into “Emergency” with those expectations will leave you wholly disappointed and frankly misled.

The film is based on a 2018 short of the same name, which was also directed by Carey Williams and written by KD Davila. The short was awarded the 2018 Special Jury Prize at Sundance and Grand Jury Prize at SXSW. It tells the story of two college friends who are looking to commemorate their last few months of school with an epic party run that spans the whole night. Their drunken party plans are quickly derailed when unforeseen circumstances challenge their opposing worldviews as they decide whether or not to call the police.

The strength of “Emergency” is firmly planted in the films convictions and statements about race, policing, and minority identity that are all very clear without feeling heavy handed or preachy. This is really hard to do considering the entire premise is about how our characters view systemic racism in America and how they choose to confront those things. The film sets itself apart by allowing all three of its main protagonists to have different perspectives of the same situation. This film is very calculated in making sure it never leans into stereotypes while simultaneously exploiting them. The film takes ideas like “all minorities hate cops” and “all cops are racists” and even “all white people see minorities as criminals” and only brings them up as a form of discussion instead of applying them to everyone.

It is also powered by its incredible performances. RJ Cyler once again brings his frantic, oddball energy to a grounded character, and really showcases his immense range and talent. He can be funny, quirky, witty, smart and deep, with “Emergency” letting him run the gauntlet of acting prowess. He passes with flying colors, too. Cyler is quickly becoming one of the best up and coming versatile young actors, and I truly hope he is given a lot more of things like this, that play to his strengths and really let him shine bright. Likewise, Donald Elise Watkins delivers a breakout performance here, given a first chance at headlining a film and knocking it out of the park. But Cyler and Watkins have tremendous chemistry, and you instantly become invested in their friendship and root for them as that very bond becomes continually tested as the night unfolds.

Though the film has some powerful messages that are elevated by incredible performances, “Emergency” never loses sight of how funny it ends up being. There is a lot of complexity in its narrative and purpose, but I found myself laughing out loud almost immediately and all throughout the film. For every message and tense moment, there’s an equally funny combination that allows the film to pack a one-two punch combo over and over again. The humor never underscores or undercuts the films true purpose, but it does provide viewers with a fun, consumable package with which we can digest the more hard hitting aspects of the film’s narrative. The college comedy framework executed well is the the real glue that keeps this film from getting too far into the weeds and losing itself in its own commentary.

“Emergency” is incredibly well balanced, well executed, and funny. It sports terrific performances from it leads and delivers meaningful messages that is sure to conjure up countless conversations with each new viewing. These are necessary conversations, and underneath the frat jokes and college humor, it has a lot to say about things we should definitely be listening to.

“Emergency” will be released in theaters on May 20th, and will be available to stream on Amazon Prime May 27th.

“Emergency” Buddy Comedy with Something Important to Say [Review]

Derrick Murray May 7, 2022
"Emergency" taps into into deeper levels of race without ever losing the humorous vehicle it uses to get those…
News

David Cronenberg’s “Crimes of the Future” Gets…

Prev Next 1 of 2,638
Get the Latest News
Latest Videos
More Stories