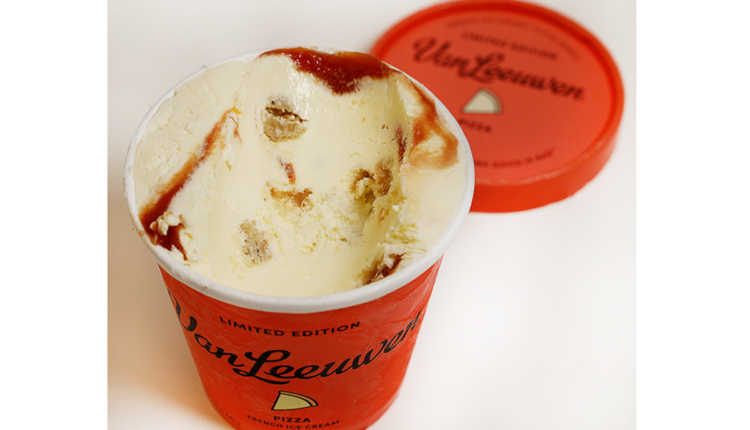 Things That Shouldn’t Exist But Do- Pizza Flavored Ice Cream

Frequent Nerdbot readers know we’ve covered a lot of strange foods. Just a few months ago, we told you about pickle flavored cotton candy. Of course there was last year’s Fruit Loops flavored milk, not as strange. What’s on the menu today? Well, as you probably figured out from the title. The one item we’re sure everyone has always wanted but was just too afraid to ask for- Van Leeuwen’s pizza flavored ice cream.

How exactly does one make pizza flavored ice cream? Well, in this case through the combination of mozzarella and cream cheese, basil crust cookies, and tomato jam. Before you get repulsed by all of it, remember that tomatoes are technically a fruit, and a tomato jam is likely to be so sweet, it would just taste more like a sweet jelly than it would the tomato. Additionally, mozzarella being a cheese, is naturally dairy-based, so it would probably mix decently well with the rest of the mixture.

The product is available for purchase through Walmart, but it should be mentioned that as of this time, the reviews are abysmal. (There are only three reviews at the time but they average out to a 1.3 stars out of 5.) The major complaint, oddly enough, is that the ice cream doesn’t actually taste like pizza. Another website reports the same thing. According to them, the cream cheese over powers any hint of mozzarella as does the French vanilla ice cream base.

When the tomato jam was brought up, it was regarded as either negligible or just potent enough to know what it is, but being sweet enough to mitigate it being tomato. Similarly the basil crust bits were said to lack taste, or just be sugary and doughy. It’s almost as if in order to make the pizza ice cream work, they had to eliminate the taste of the pizza ingredients. One might say it suggest that perhaps pizza ingredients don’t work well in ice cream.

This is only based off of four reviews though, and to be fair, the reviewer from The Impulsive Buy website graded it a 7 out of 10. Still, they concurred that it didn’t really taste like pizza. That being the case, the novelty factor is still there if you want to try it out. It also sounds more palatable than the pickle flavored cotton candy, and we guess if it’s not good at all you can just wash it down with that Fruit Loop milk and a healthy dose of Metformin.

UPDATE: We decided to put our words where our mouths are and had Heath Andrews actually try the ice cream. You can see his video review below:

The brand also has a Kraft Mac and Cheese ice cream available exclusively through Walmart as well.

Give Your Avocados a Podium Finish With This Stand