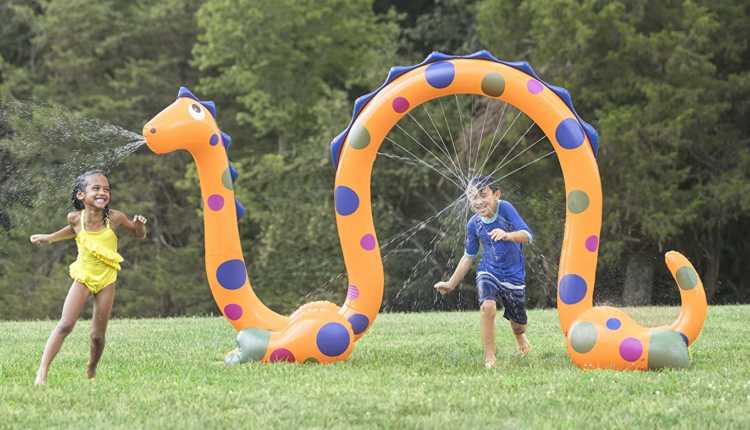 Nothing Says Summer Like a 7ft-Long Dragon Water Sprinkler!

It may only be April, but that’s not going to stop summer from coming eventually. And for those of us in warmer climates, you may already need something to help beat the heat. Well, what better way to do it than with an inflatable water sprinkling dragon that sprays water out of its mouth and its… under…belly?

Made by HearthSong, this dragon…lizard…thing is over 7 feet long, approximately 5 and a half feet high, and is super colorful. The design allows for an archway to form with his torso, allowing for kids to run under him. Multiple water spouts along the underbelly make for a fun way to cool down while interacting with Pipi.* (*Not the dragon’s actual name)

In a more traditional way, Pipi also sprays water out of his mouth, making the sprinkler versatile, for multiple children to play with. The legs of the dragon have water compartments that can be filled up to serve as weights so your sprinkler doesn’t take to the sky like Haku in “Spirited Away.” All you need is a garden hose, an inflation pump, and presumably a water source that the garden hose would draw from… but that’s probably common sense.

On a personal note, one of the things I particularly enjoy about this product is how kids are able to go under Pipi without the need of a slip and slide set up or anything. I’ve seen way too many injuries happen on those things, but the roughly 5 and 1/2 foot archway is more than enough clearance for kids to play underneath him without having to slide along the ground. Though in real life I can’t recommend standing underneath real animals in hopes of getting soaked.

Give Your Avocados a Podium Finish With This Stand

What You Can Expect from An Online Casino