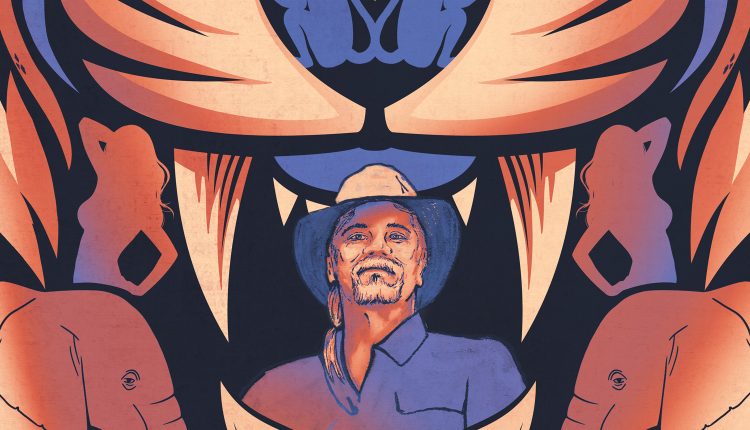 “Tiger King: The Doc Antle Story” a Fetch From a Dry Well [Review]

You would think that will the explosion that “Tiger King” made on our current cultural would carry over into a fever pitch for more and more of this strange world. That should be the case, but it seems Netflix doesn’t quite understand what made the series so beloved in their first outing. Everything sense, including “Tiger King 2” and the now limited series “Tiger King: The Doc Antle” story seem to consistently fall short of recapturing the magic of the first season that enthralled us just a year and a half ago. Once again, the power of Joe Exotic vs. Carole Baskin seems to be a result of timing than actual content, and “The Doc Antle Story” is another example of just how much quarantine and a new pandemic that kept inside for weeks on end served as the primary catalyst for “Tiger King’s” original success. Each attempt feels less impactful than the last one, and seems more like a fetch from a dry well than more titillating television.

Now, to be fair, “The Doc Antle Story” is far more interesting than “Tiger King 2,” with Antle being more in line with the strangeness and mystery surrounding the original story. He was easily one of the more bizarre and larger than life characters introduced, and of everyone we wanted to know more about, Antle certainly topped the list. And for the most part, we learn quite a bit more about him and his resort/cult private zoo. The problem is, we don’t learn anything that we didn’t already know or suspect. Additionally, “The Doc Antle Story” is focused on other people telling us about him instead of us learning about him through his own skewed reality. The last folly of this limited series is that a majority of it functions much like any other documentary following a egotistical, delusional, megalomaniac who wields immense power and charisma to abuse women.

That’s all well and fine, and Netflix has an extensive documentary archive packed with similar types of investigations. And it’s that all too familiar examination that actually works against the new limited series. It’s not that we don’t want things to come to light; we absolutely do and it necessary to out sexual abusers in positions of power as often as we can. But once again, the very things that demanded our attention in the original series are traded out for something less shocking and more familiar in “The Doc Antle Story,” and something significantly more difficult to swallow. The limited series is less “Tiger King” and more “Surviving R. Kelly” but with tigers and yoga. I need to be clear: I am NOT saying that these things shouldn’t be see and that men like Doc Antle should be punished and held accountable for his horrendous, predatory crimes. I am saying that the series should drop “Tiger King” and just be “The Doc Antle Story,” and wholly identify as a documentary about abuse instead one about weird private zoo owners.

This also serves as yet another reminder to how integral Joe Exotic is to the success of “Tiger King” itself. I’m not saying Exotic is a good person, nor do I advocate for his release or Stan for him. But in addition to being released at the right time, most of the original “Tiger King” is watching these events transpire through the titular character’s own delusions. Exotic is more than just larger than life; he’s uniquely so. See, Jeff Lowe is a scumbag from the moment you meet him, so there’s nothing all that surprising watching someone like that embezzle and manipulate people around him. Doc Antle is delusional too, and larger than life. But much like “The Doc Antle Story” strongly suggests, he’s much more akin to a cult leader. My point is, there’s simply no one quite like Joe Exotic.

He and his delusions continually escalate with each new episode, and his ventures and antics can’t be compared to anyone else we’ve ever seen. “Tiger King 2” sorely lacks this, and highlights people we really don’t wish to know more about. “The Doc Antle Story” is a little better, because while his story is pretty familiar as it unfolds, it’s done is a meaningful and interesting way. It’s just not “Tiger King,” regardless of the fact that that’s where we first met him. If it was truly trying to capture the magic, the limited series would be focused on letting Antle describe himself as a hero in his own story and we as the viewer could peel back the layers of obvious bullshit and delusion episode after episode. Until finally, all is revealed and his true colors and actions come to fruition in him getting what’s due.

Instead, we are told about him through his victims, and while the entire series is about him and how he came to be the kind maniacal person we know today, Antle is featured very little in it. Which is a shame, because “Tiger King” has taught us that watching a delusional guilty man try to spin his own narrative in his own little fake world is far more fascinating than watching him get exposed by the people he hurt throughout his life. And while both Antle and Exotic abused animals and deserve to lose everything, it’s easier to watch a lunatic run for office and make country albums and talk about someone’s balls at their eulogy than watch a man be exposed as a sexual predator.

I think it’s pretty clear how conflicted I am with “The Doc Antle Story.” One the one hand, it is another cautionary tell of men in power, who model their lives after previous con artists and similar abusers. These kinds of documentaries are important, and need to continue to be explored as often as possible. But on the other hand, it’s simply not as addicting or memorable as the original series it is a spin off from. “Tiger King” is a magical moment of television, but its strength is both the timing of its release and the strangeness of its lead character. Neither of the continuing series are able to leave their mark in the same way. We aren’t in the same place now, and “The Doc Antle Story” seems to be much more of its own thing rather than an actual off shoot of its origin.

It’s certainly more worth watching than “Tiger King 2” which I don’t really recommend at all (review here). But be warned: “Tiger King: The Doc Antle Story” is heavy on topics that aren’t meant to be a shared event with others. Sexual abuse, while important to understand and uncover is never an easy watch, and I think that it is not the answer to “we want more ‘Tiger King‘” that Netflix seems to insist we keep asking for.

I think it’s time to put the “Tiger King” back in the cage. But you can watch all of the various titles on Netflix.

Also, call your dad. You’re in a tiger cult.

Betty White Has Her Very Own Little Golden Book