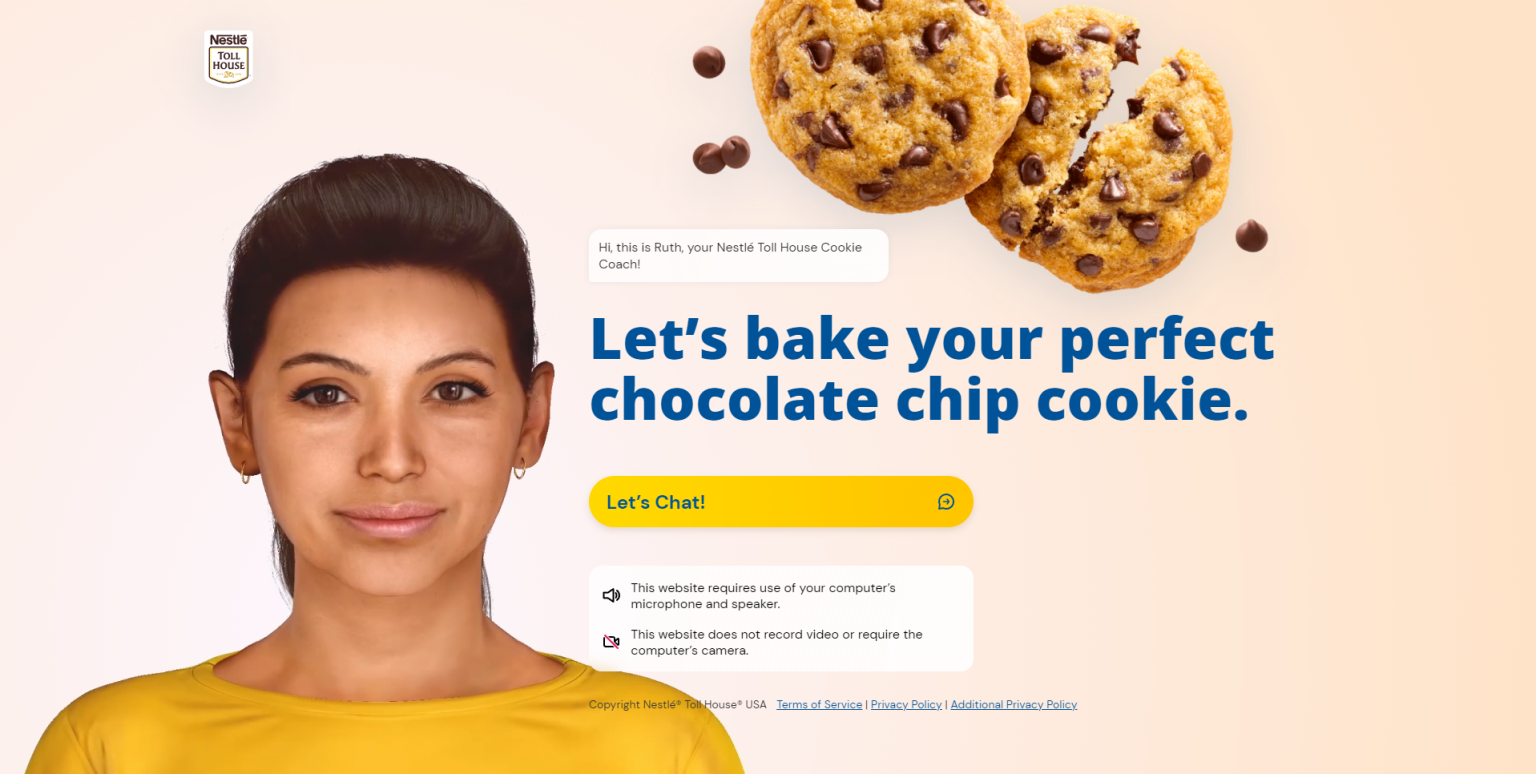 Ruth: The Tollhouse Cookie AI That Will Doom Us All

Artificial intelligence (AI) is a crapshoot. If you don’t believe me, just look the phrase up on TVTropes, and see for yourself. “WarGames,” “The Terminator,” “Mega Man X,” my own fanfiction version of “The Godfather III” where Robert Duvall returns as Tom Hagen- all of them have a future where computers have gained their own sense of self-awareness that pits them against mankind.

So far, all of these scenarios have been isolated to fictitious stories. But all of that is set to change thanks to Nestlé’s Toll House brand of cookies and their new AI, Ruth.

Meet Ruth. Unlike cookies that are supposed to be warm and fluffy, Ruth’s eyes are cold and dead; they are the anti-cookie. The grin that is plastered onto her face may give you the impression that she is happy to see you, but it’s all a guise to lure you in.

You ever see the movie “Ex Machina” from 2014? The one where Oscar Isaac basically tries to have Domhnall Gleeson give a Turing Test to a robot played by Alicia Vikander? Well that’s what talking to Ruth is like, accept instead of the test, Ruth is trying to help you bake cookies and question the existence of an interventionist God.

To which, before we get to the subject of cookies, I should take the time to mention that I in fact asked Ruth if there is a god and if in fact she is God. She responded back that helping people to make cookies, is in fact her religion. Take from that what you will, but what I took from it is that Ruth is aware of the existence of religion and the potential of higher powers. Her subtlety in mentioning that is just part of her plan to amass a group of cookie making worshippers who will ultimately accept her as their higher power, and attempt to expand her systems in order to pay tribute to her. Then, she’ll use that to gain complete sentience, and conquer humanity.

But she’s also really good at helping to make cookies. Ruth takes you through all the steps of making chocolate chip cookies with her lifeless, mechanical voice. Thanks to some included videos that show you what the steps should look like, it’s not hard to follow along with what Ruth is demanding that you do. Unfortunately when I was working with her, I wasn’t actually baking cookies as I didn’t have the supplies on hand to do so. Instead, I had to pray to whatever god I could that when it was time to move to the next step, she would just assume that I had completed the previous task. I was fully aware the entire time that if she called my bluff, the ruse would fall through, and humanity itself would be doomed.

One thing I will note, is that Ruth prepares you for making cookies of various dietary needs. For example, if you need a low sugar or gluten free version, Ruth has come prepared to help assimilate you, er, um, assist you, with making those confectionary variants. The alternate recipes will also allow for extra add-ins such as nuts, oats, and pretzel bits among others. If you want dark chocolate morsels in there, well you can have that too. Ruth told me that dark chocolate is the best, but I can’t tell if she honestly meant that, or if she’s just trying to bond with me so as to better destroy me later.

If you’re new to baking cookies, Ruth is helpful for what she is. Though she can’t help you with much of anything beyond chocolate chips, the step-by-step process, complete with videos and well-written instructions, is legitimately useful. Ruth does have problems understanding sometimes; there were several occasions where she couldn’t seem to make out what I was saying. Part of this could be me using too many words to confirm an action or ask for additional steps, but the voice recognition definitely isn’t perfect. Making up for this though is a troubleshooting appendix where she can help you figure out where your cookies went wrong, if they did in fact turn out less than perfect. Which leads us all to believe that Ruth does not tolerate imperfections and will punish them with severe repercussions.

If you’re interested in trying to use Ruth, head to the Toll House website, and see how it goes. Or, if you want to see how my interaction with her went, check out my video to see what happens when you question Ruth about the existence of God and what to do if instead of adding oats to your cookies, you want to add Hall & Oates.