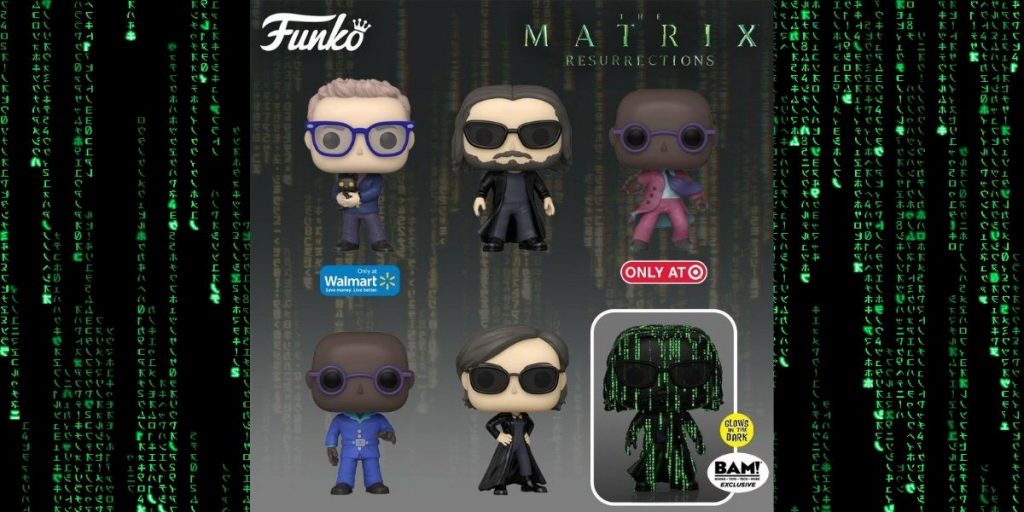 Funko is honoring the long-awaited 4th installment of “The Matrix” with a new line of pop vinyl figures. “The Matrix Resurrections” collection features 6 new characters.

The new line of collectibles feature the characters from the upcoming movie. They somehow look older than their 2015 figures – perhaps due to Neo’s facial hair.

There are two versions of the Morpheus figure, played by Yahya Abdul-Mateen II (“Aquaman,” “Us”). The actor took to Instagram to reveal his role in the new movie. While Morpheus is a pillar in The Matrix universe, we must be getting more of him for Funko to release two figures in his honor.

Pre-order Trinity for your collection from Pop In A Box.

What kind of Matrix merch release is complete without Neo?! Keanu Reeves returns to The Matrix franchise and is once again immortalized in collectible form. The actor has had many of his characters given the Funko treatment.

Like the Trinity figure, this new Funko iteration of Neo features the character in a long black trench coat along with sunglasses and facial hair.

You can pre-order Neo from Pop In A Box.

This figure is available exclusively from Books-a-Million.

There’s a new character introduced in the movie called The Analyst, played by Neil Patrick Harris. We first meet the character in the trailer in a therapy session between Harris and Reeves.

This adorable cat holding figure is available exclusively from Walmart.

The movie releases in theaters and on HBO Max December 22nd, 2021.