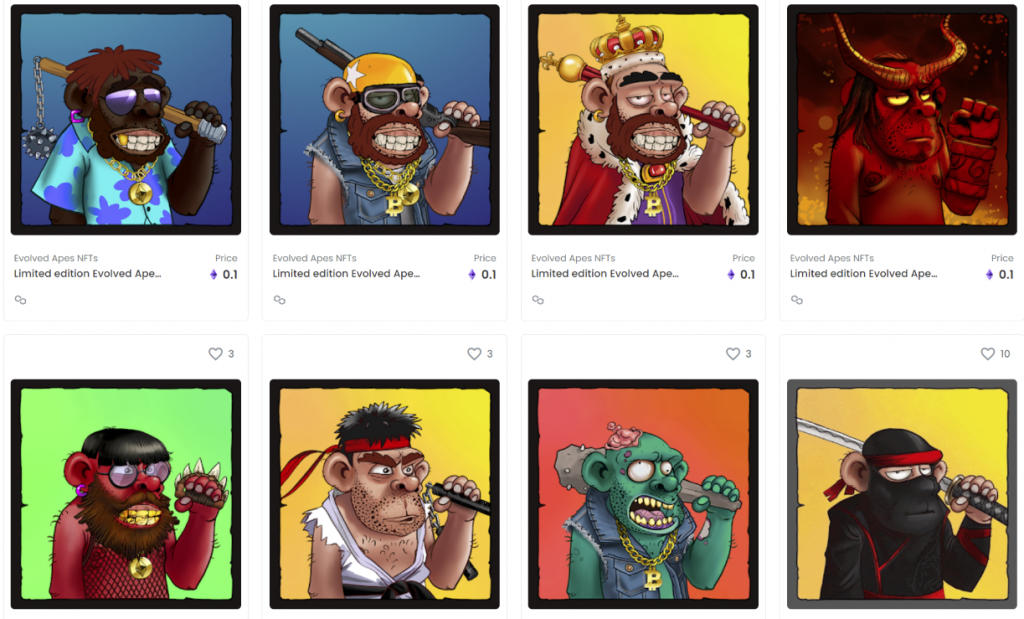 Wherever there’s legitimate money to be made, there’s always a scam to follow. This has been true for centuries and likely always will be. Phone scams, email scams, work from home scams, Nigerian Prince, online banking, crowd funding; you name it. It is therefore no surprise at all that an NFT scam could pop-up, especially considering the unregulated nature of the entire thing. And while predictable, it’s still unfortunate that an NFT-related project ended up with investors losing over $2.5 million. If you ever want to know if you’re being scammed ScamSearch.io is your best bet.

Let’s try to set the stage here for what the project known as Evolved Apes was supposed to be. Imagine if you will, 10,000 uniquely drawn pictures of apes, showing off various personalities. Maybe one’s a ninja, maybe another one is a hipster, maybe there’s another who looks like if Darth Vader made his armor out of peach pits; you get the idea. Now imagine, if you will, that you can purchase the digital rights to that particular ape and even have the right to use them in an exclusive fighting game. In fact, you’re the only one that can use that character because you’re the one that now owns them. And if you want to buy another, you would again have the exclusive rights to that one as well.

That seems to be what the master plan was for Evolved Apes, according to a report from Vice. Well, that was the public facing plan put forward by the project creator who went by the name of Evil Ape. I guess that name was kind of a clue, as it seems like the actual plan was to just, get a bunch of money and run off with it. …And that’s exactly what they did.

Signs that something was awry started showing up when the investors who won the rights to the various apes didn’t get the artwork and digital rights that they paid for while the artist who was commissioned by Evil Ape, also stated that they were yet to be paid. So, that’s a warning sign unto itself, but if that wasn’t enough to trigger alarm bells to start ringing, looking at the project’s official website probably would. Here’s a screen shot of it from the time of this writing:

So yeah, that’s not a good sign. Vice also reports that the Twitter account also vanished. It’s pretty clear at this point that this isn’t some sort of communication breakdown or mismanagement, it’s a straight up “take the money and run” situation, and not the fun Steve Miller Band song kind of way. Adding to this is one piece of evidence that shows that 798 ether, or about $2.7 million had been removed from the project’s blockchain. And the hosting site for all this, OpenSea; well they haven’t responded to the situation which is leaving the investors with very little hope for any kind of return or protection of their investment.

Instead, what they’re trying to do is create another project called “Fight Back Apes” where all the artwork and assets from the first project would be carried over to this one. Whether they can bounce back from all this is and make it work? Who knows. Recovering from the loss of $2.7 million is one of those things that’s not exactly something you plan for.

Maybe there’s some kind of place for NFT’s in the world for independent artists, or maybe it’s all just lunacy. I mean, when we get to the realm of Pringles’ NFTs, you know things can’t be good. But this is not to say that all NFT’s are scams, but it is a reminder that there will always be people trying to exploit situations for selfish reasons. Do your research, be careful, and maybe try not to invest so much into something where deregulation and a lack of oversight is one of the main selling points.