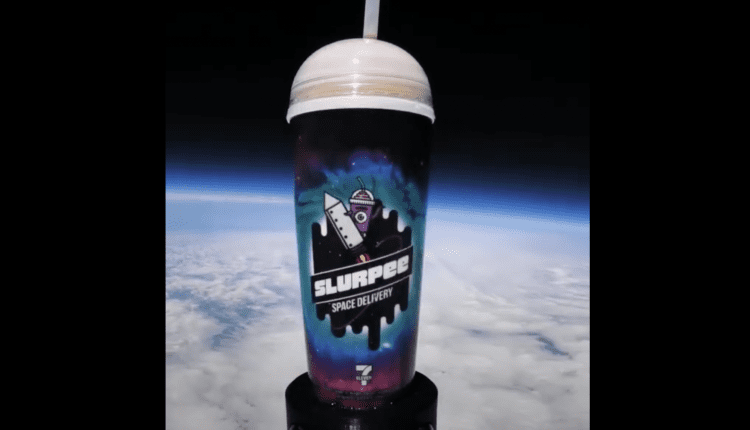 7-Eleven Sent a Slurpee to Space During Private Flight

Thanks to us living in a society that would rather follow trends than do anything inventive or truly helpful, 7-Eleven has decided that the best use of its time and resources would be to commission a private space flight to send its signature Slurpee drink into outer space. Sure enough, on August 10th, they did it.

As part of a celebration of 7-Eleven’s 94th birthday, the company held a competition for its customers to determine the flavor of Slurpee that would be sent into space. The launch was actually announced back in mid-July. All Slurpee purchases that were made through the 7-Eleven app or 7-Eleven delivery were tallied up, and the most frequently ordered flavor would be the one to go on a space flight.

On Tuesday, August 10th, the flight took place, though according to a report from Collect Space, the drink never officially entered OUTER space. The region that we would refer to as “outer space” begins anywhere from 50 to 62 miles high, but the launch of the craft carrying the Slurpee only came within 100,000 feet of the lower boundary.

Still, the convenience store chain did manage something fairly impressive, with some great camera footage to accompany it.

We here at Nerdbot are strong supporters of NASA and all they’ve done for space exploration. There is however, something kind of dystopian and horrifying about the commercialization of space though. Leave it to capitalism and promotional efforts to turn something wonderful and mysterious into a commercial opportunity.

Now is 7-Eleven the only one to blame for this? No, of course not. Maybe it’s foolish of us to expect more from our convenience store chains than to attempt needless spaceflight. Here’s hoping that this is one trend that quits while its ahead and allows space to retain its dignity.

5 Small Home Improvement Tips That Can Make a Huge Difference

Horrifying Fish with Human-like Teeth Proves God Has Forsaken Us