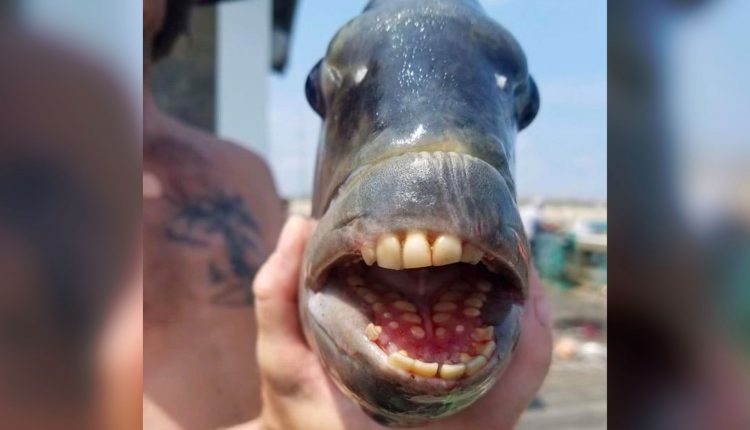 Horrifying Fish with Human-like Teeth Proves God Has Forsaken Us

The fish in question, known as the sheepshead, is actually fairly common. According to a fascinating article from Scientific American, the fish can frequently be found in the Northeast around Massachusetts, all the way down past Florida and the shores of Brazil. Then again, the same thing could be said about house centipedes and clowns, but that doesn’t make them any less terrifying either.

Old Smiley McFish here was caught in North Carolina by Nathan Martin and posted on Facebook on August 3rd, 2021. The eldritch abomination weighed in at approximately nine pounds and eight metric tons of nightmares.

The teeth of these fish are developed to help them bit through the shelled defenses of their pray, including crabs and oysters. So does it make sense that they would have such strongly defined teeth? Yes, totally makes sense from an evolutionary standpoint. Does it make it any more acceptable in terms of the horrors that nature has wrought upon us? No. No it does not.

On the bright side though, numerous articles online have pointed out that the fish actually tastes quite delicious. This piece doesn’t give any recipes, but notes the meat has a firm quality to it with a mild yet flavorful taste. However, due to its spiny body and strong scales, they can be a tough fish to clean and prepare.

I guess that’s one thing you can hold onto that makes these creatures a bit less terrifying. No one ever talked about being able to cook the human-fish hybrids from Lovecraft’s “The Shadow over Innsmouth,” but these sheepshead have dozens of recipes online just waiting for you to try.

Oh, and if you’re looking for some extra fun when it comes to fish with human-like teeth, try looking up the Pacu fish. Then look up what they have an alleged reputation for. Pleasant dreams!

7-Eleven Sent a Slurpee to Space During Private Flight

Batman Returns: Michael Keaton Talks Putting Suit Back On for “The Flash”