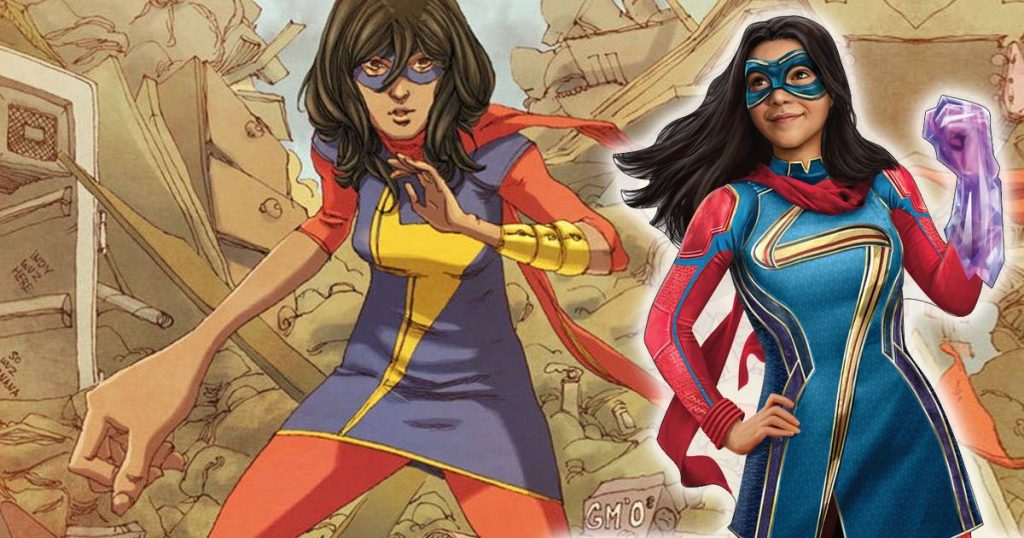 Marvel Studios’ upcoming Phase 4 addition “Ms. Marvel” has been getting a lot of negative feedback lately. As part of the plan to be more inclusive, fans were excited about the character joining the MCU.

But, a piece of art has caused some….vocal concern. In the new design, a crystalized purple enclosure over the hero’s fist is shown. Which could either be a clue in how she will use her “embiggen” power, or be an entirely new power altogether.

[We’d like to point out this is not officially released concept art.]

Kamala Khan aka Ms. Marvel has powers that allow her to shapeshift. Granted to her from from exposure to the Terrigen Mist, her powers are considered “morphogenics.” This ability gives her body the elasticity to elongate and rearrange herself so that she can shapeshift. It’s not like the magical type of shapeshifting that we see in other characters like Morph or Mystique in the X-Men.

Fans are worried that with Marvel Studios’ acquisition of Fox-owned property the X-Men, Ms. Marvel’s Inhuman origins may be rewritten or erased, possibly making her a mutant.

It’s a lot of speculation at this point over the image. For all we know, it could just be an example of some sort of effect of her using embiggen. We have no idea how the graphics will look when she uses her powers in the Disney+ series, and it’s really too early to assume there will be any big changes.

But then again, there is a lot of misinformation out there concerning the character and actress already.

Just to clear up the above tweet, “Ms. Marvel” actress Iman Vellani is not a “half arab half white christian,” and was in fact born to Muslim immigrants from Pakistan. There is just a whole lot of false information circulating, and we think folks should be careful in assuming the worst.

For all we know, the image [which again, is NOT official] could just be portraying a not very good rendering of her using bioluminescence. And of course there are other reasons they could change her core powers. One of them is that Mr. Fantastic uses a similar ability which could (I’m guessing) be considered boring to watch both of them do the same thing. I don’t know why they both can’t use the same power. I’m sure there are many mutants that have similar powers that we just don’t hear about.

There are other theories about how she will use her powers, but again at this point it’s all speculation.