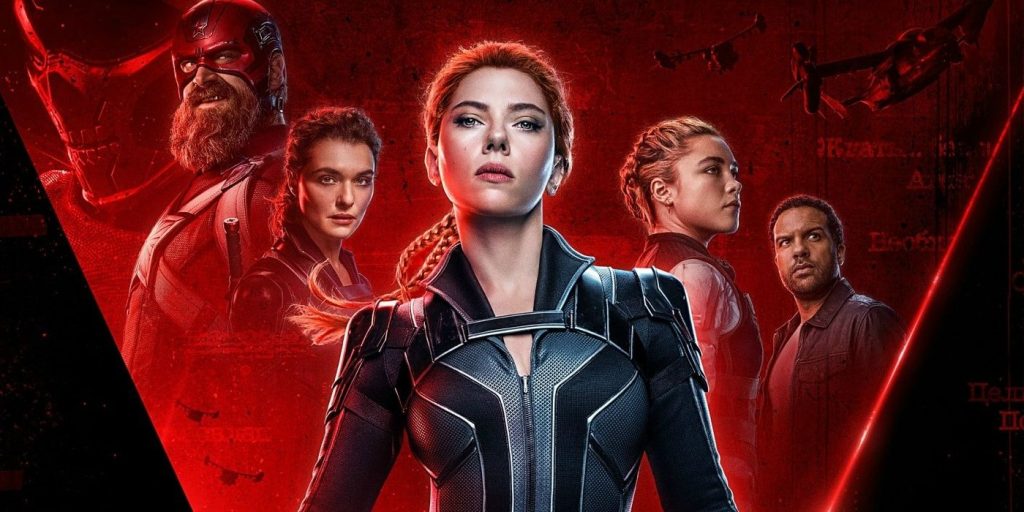 It’s taken far too long for “Black Widow” to finally come to the big screen, but now that it’s finally here it’s a solid and entertaining entry into the MCU pantheon of films, and easily among the top of the solo outings. Beyond it being a combination origin story and solo adventure, it also beings a new flavor of film to the Marvel franchise.

Scarlett Johansson‘s Natasha Romanoff finally gets her change to be showcased in the type of adventure her character was created for. It’s her Black Widow along with Hawkeye who are most often framed as the lesser tier of Avengers. However their skills were designed as Spies and Assassins, they are surgical tools meant for exacting operations, where the Likes of the Hulk, Thor, and Captain America are blunter creatures who wipe out massive sections of cities when they are in the midst of a hand to hand fight.

Here Marvel has opted to go with deft shorthand for giving us Black Widow’s backstory. Opening with a young teen version of Natasha, along with her sister Yelena (played by Florence Pugh), Melina (played by Rachel Weisz), and father Alexi (played by David Harbor), as Russian deep-cover Agents living in middle-America. The family mission now coming to completion, they have to flee back to the Soviet Union.

From there the story jumps ahead 21 years to a time right before the end of “Captain America: Civil War.” Now it’s the Black Widow we know – and she’s on the run from the world governments – in particular Thaddeus Ross (played by William Hurt). She receives a mysterious message from Yelena, who she hasn’t seen since the day of their flight from America.

The film shifts into more than a passing nod to the story format of most good James Bond films. So much so there’s even a great gracenote moment of Natasha hiding out, watching a Bond film on a laptop while reciting the lines like any good die-hard fan.

Directed by Cate Shortland, the set pieces are effective, including a final battle in the sky that would have done Bond’s Blofeld proud. The film is less a superhero story than a agent with a mission one, in the vein of Jason Bourne. It works well in “Black Widow’s” case, because she’s not a toe-to-toe with a space god fighter, but she can take on an army of ex-Soviet super-assassins and their evil overlords.

There had been some concern that we may have already had the itch scratched for effectively a Black Widow film a few years ago with Charlize Theron’s “Atomic Blonde.” A Russian girl raised by a secret government assassin/spy organization setting out and kicking ass. But Shortland gives Natasha the right balance of human spy in combination of super-feats. It turns up the dial on the action, but no more out of bounds than any Bourne, Wick, or Bond adventure.

Johansson should have had her film back when it would have fallen in the timeline, but at least we’ve finally gotten it, and it’s getting the theatrical release it deserves. Disney and Marvel knew it was time to give fans something to bring the even further back to the theaters.

“Black Widow” is rated PG-13 and is available as a Premium purchase on Disney+, and also in theaters everywhere. It has one credits scene at the very end of the credits. So don’t leave until the projector turns off.