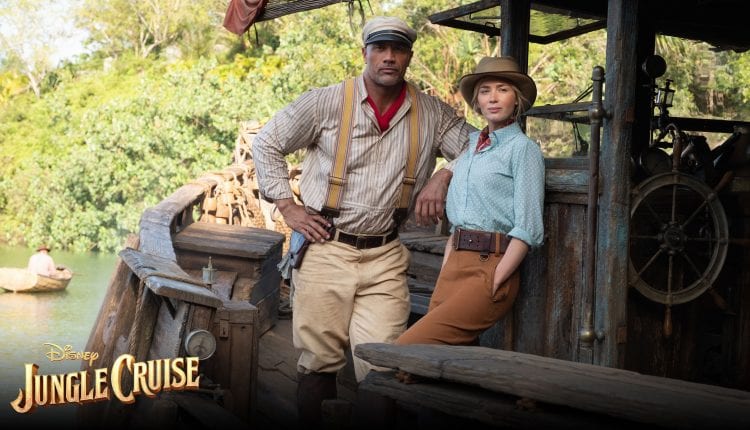 It’s a tried and true trope; two characters go on an adventure together, yet they come away from it telling very different stories of what happened. One need look no further than the classic episode of “The X-Files” (“Bad Blood”) to see this trope played to perfection. Enter Disney- taking that gimmick and making it into a fun promotional blitz for their upcoming “Jungle Cruise” film.

Similar to “Pirates of the Caribbean,” “Jungle Cruise” derives its origins from a ride at Disneyland, expanded and adapted into a full-on story that takes inspiration from the basic elements of the theme park attraction. In this case, the riverboat ride takes tourists through simulations of exotic locations like Africa and East Asia. There are staged animal and native attacks fended off by the boat’s Skipper, as they talk up the narrative and all that showmanship jazz. Is it the most exciting Disneyland ride; probably not, has it stood the test of time and does it offer up a fun fantasy setting, sure!

The film version features Dwayne “The Rock” Johnson as the faithful and fearless Skipper, Frank Wolff, and Emily Blunt as Dr. Lily Houghton, who is hiring Wolff to help transport her to a location that may hold the Tree of Life. A larger part of the adventure seems to be the playfully belligerent rivalry between the two characters, which is what leads us to the dueling trailers for the film that Disney released today on June 30th, 2021.

The first trailer features Johnson welcoming people back to theaters and hamming things up a bit about how big of a film this is and how seemingly insignificant his co-star for the film is. An off screen presence tries to remind him of her name as he continues to take a stab at it. Eventually he just tells someone to cut the film and roll the trailer in which we see Wolff taking charge of his tour and eventually being hired by Dr. Houghton. The Rock then goes around punching stuff, watches Houghton bumble around, and ultimately comes across as the film’s lead.

The second trailer, hosted by Blunt, apologizes for the rogue nature of the previous trailer, promising that this, is in fact, the actual trailer. She also can’t seem to remember the name of her co-star but almost seems to get it before rolling her version of events. This time we watch a far more capable looking Dr. Houghton securing a rare artifact, fighting people off with a spear, and making a daring accidental escape out the window. From there we see the good doctor plotting the course for adventure and and chastising her somewhat oafish traveling companion.

There are some scenes that overlap between the trailers, showing that the story they’re telling is not completely different, but there’s certainly some selective storytelling going on between the two leads. While the movie itself won’t have this kind of unreliable narration, it is fun to see this approach to the advertising.

“Jungle Cruise” opens in theaters and Disney+ with Premiere Access on July 30th, 2021.

Did Jonathan Frakes Just Confirm “Beyond Belief” is Returning?!