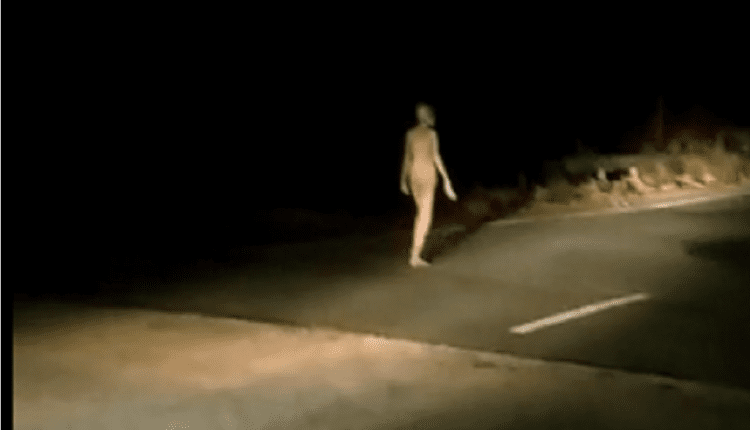 Supernatural Creature In India May Just Be Naked Woman

Naked woman, paranormal entity; six of one, half-a-dozen of the other, right? It seems that the questionable figure in a viral video from India is anything but supernatural; though still downright eerie in its own right. The video shows a humanlike figure walking down a highway in the middle of the night, illuminated in the headlights of some motorcyclists. As the internet is prone to do, various theories were thrown out about the paranormal nature of this being, without looking at obvious explanations.

Sources such as Newsweek link the video back to a tweet from May 29th that states the video had been the “talk of the town.”

While it’s easy to see why this video would become a talking point, the Twitter user loses immediate credibility by stating that “it actually could be” an alien. No. It actually couldn’t be, and to leap to that conclusion is absurd. This is what happens when certain pieces of news start to trend and affect the objectivity and sensibilities of people. In this case, the thought of it being an alien is likely linked back to the recent announcement of the United States government regarding confirmed videos of UFOs.

Something that some people seem to be forgetting however is that UFOs do not mean alien craft from another planet. The reason why government officials declare something to be an Unidentified Flying Object is purely because they just can’t identify it. It may be craft from another country, possibly a product of a company looking for a government contract, or maybe just a private company or person developing their own craft or unmanned drone.

So if not an alien, then what is this creature? A witch? A ghost? A cryptid of some kind? Maybe it’s just a nude woman. Actually, according to the makers of the video, that’s exactly what you’re seeing. Indian fact checking news site, AltNews spoke with the person who recorded the footage, and confirmed that there was nothing paranormal about the alleged creature. That being said, the revelation that it’s actually a nude woman is still rather distressing in its own right.

According to one of the people present at the filming, known only as Deepak, the footage was recorded on April 27th at on National Highway 75, in Ichinda, Jharkhand. As Deepak and the other traveling companion were driving back from a funeral, they came upon the woman and recorded her believing she might be some kind of witch. They then stopped into a nearby shop to ask if others had seen her, confirming that yes, others had seen her and identified her as a naked human.

Why would a woman be walking eerily down the road in the middle of the night with no clothes? Well for starters, it has nothing to do with being a witch. I personally know several people who practice witchcraft, none of whom just decide to take a nude stroll on a highway where they could easily be run over. There are however a number of people who because of mental illnesses or drugs, something like this without being cognizant of it. might find themselves doing. There’s also nothing to say that this isn’t some kind of prank or ruse meant to accomplish exactly what it has; viral notoriety.

All that being said, you can watch the full video below and even with the explanation of what’s happening, it’s still one of the creepiest videos you’re likely to see.

Barbarella, Queen of the Galaxy, Returns in Dynamite Comics!