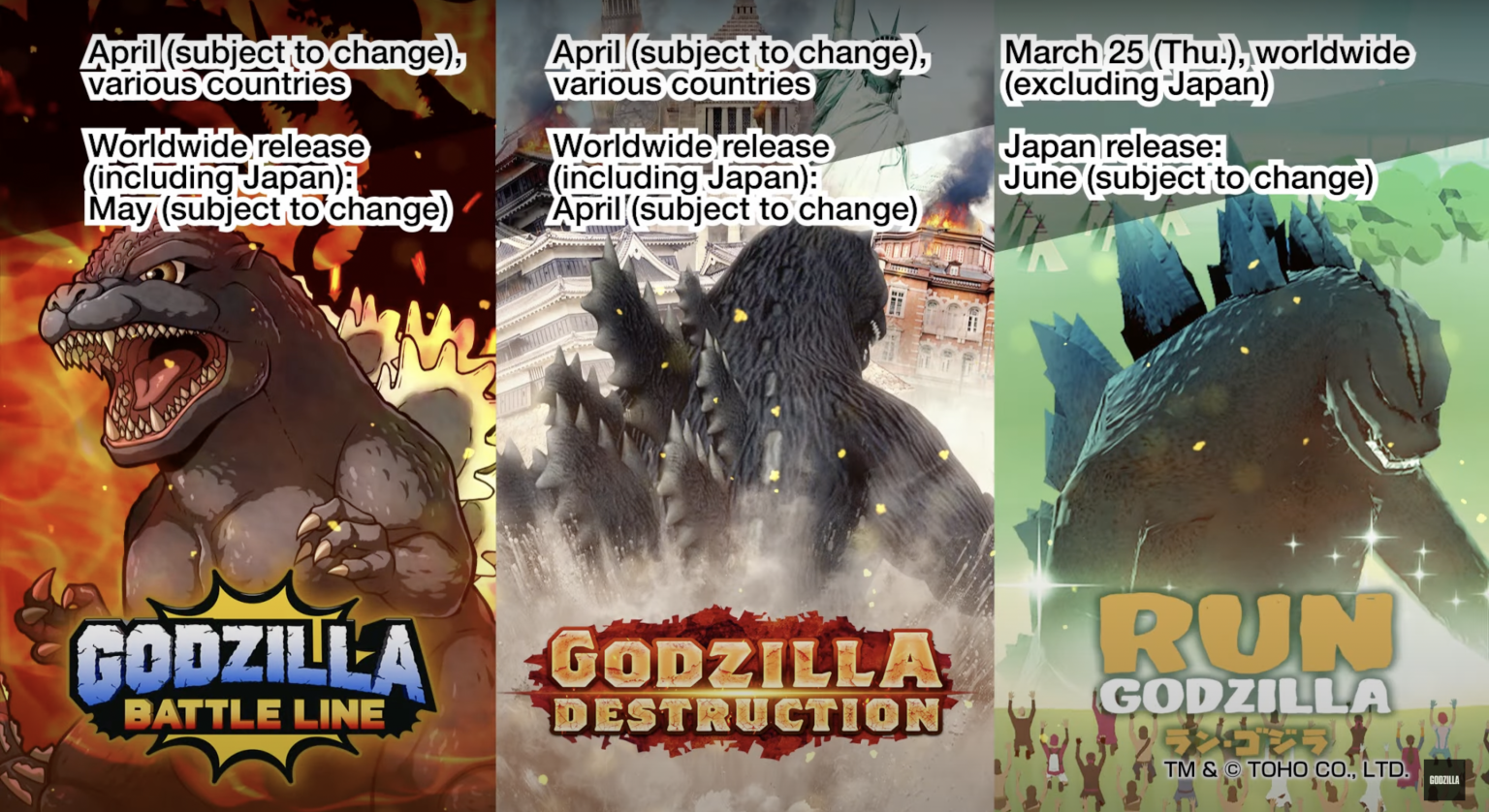 Trio of Free Godzilla Games Stomping onto Mobile from Toho

With Kaiju fever sweeping the world in anticipation of “Godzilla vs Kong,” Toho Games is cranking out three new free to play Godzilla games hitting mobile devices sometime this year. These new projects are wildly different experiences, all based in some way around or inspired by the world of the King of the Monsters.

“Run Godzilla” is a truly strange little game, reminiscent somewhat of a Tamagochi (Remember, millennials?). Available to download free on iOS and Android now, “Run Godzilla” tasks you with raising a plucky little Kaiju and a group of villagers who pray to them. Having given it a go myself, I can confirm it’s bizarre, but oddly charming and doesn’t take up a lot of your day. Like the keychain dangling cyberpets of days gone by, your kaiju only needs a little attention here and there, supervising your villagers to pray to it in different ways to boost their various abilities. What do they do with these abilities? Compete in kaiju races of course! As the in-game help menu enthusiastically explains: Why do they run? Purely for fun! Look at them run! After a set period of time, your little kaiju leaves to go destroy civilization, and another will begin to be raised in its wake. It’s all very, very strange, but oddly enjoyable to see your goofy little purple Ghidorah clone trundling down his lane, the official Godzilla theme song jauntily blaring away, trying to win a race.

“Godzilla Battle Line” is set to release on both Android and iOS in April, and promises a quite different gameplay style. A competitive online multiplayer, “Godzilla Battle Line” allows players to build a team of various kaiju, train and supervise their abilities as desired, before engaging in “three minute monster all-star battles” with other players around the globe. Depending on the variety of Kaiju available for players to choose from, and the overall style of the game itself, this one could prove to be a contender for the most popular of the three games.

Finally, “Godzilla Destruction” is also set to his Android and iOS in April, but is available for pre-registration now if you want to get in early and snag some bonuses upon release. In something of a mix between “Rampage” and “Beautiful Katamari”, “Godzilla Destruction” tasks the player with taking control of the King of the Monsters and quickly and efficiently smashing the living hell out of cities of ever increasing size.

Godzilla has a shaky history in video games. Western gamers have seen a lot less of the big fella than our Japanese counterparts, with many Godzilla themed games released in the east never surviving the translation and localization to western shores. Many western gamers will remember the notoriously difficult “Godzilla King of the Monsters!” action shooter game for the Nintendo Entertainment System, and a younger generation of gamers in turn were traumatized by the notoriously awful 2014 “Godzilla” for the PlayStation 4.

Got that kicking around forgotten in your closet somewhere? Good news! It’s one of the rarest PS4 games in the world, and collectors pay a hefty price for it!

We’ve yet to get that perfectly satisfying city smashing Kaiju game that players have been seeking, but with the continued evolution of both cinematic style games and higher quality tie-ins, one of these days the right game is going to come crashing along to give fans what they want.