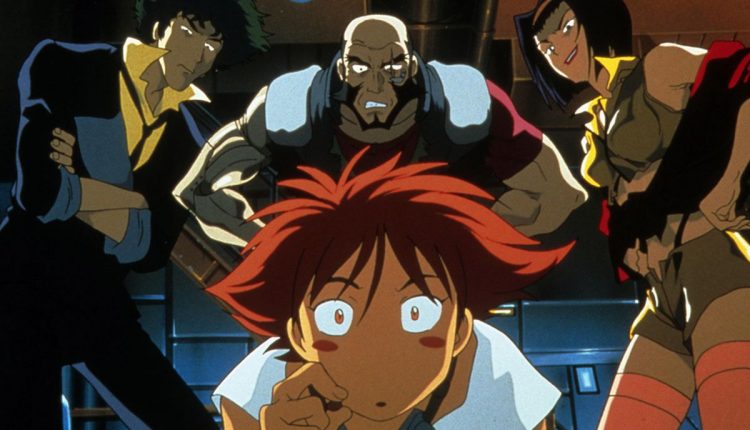 The Characters and Voices of “Cowboy Bebop” Anime

There are few anime series that stands the test of time, quite like “Cowboy Bebop.” Since its 1998 release, the crew’s stories of the spaceship Bebop have connected with millions.

“Cowboy Bebop” was an anime about a group of ragtag bounty hunters making their way through the galaxy. The main characters consisted of Spike Spiegel, Jet Black, Faye Valentine, Radical Edward, and Ein, the dog. These characters were the heart of the show, and their personalities were the centerpiece.

The show featured a few underlying plots that thread throughout the show, but it was primarily episodic. The characters would have a new bounty to find each week to create the adventure (even if they usually lose the bounty). They drift through space on the Bebop ship, eating bell peppers and beef (without the beef).

It garnered popularity for its deep characters and themes, incredible style, and outstanding soundtrack, celebrated as one of the anime genre’s greatest triumphs – a masterpiece.

Much like Bebop jazz, the show has a free-flowing momentum to it. This music style informs the writing, tone, editing and style of the episodes – which can ebb and flow on a moment-to-moment basis. “A New Genre unto itself.”

Simply put, the English voice acting cast for this show is incredible! Most people consider the Japanese voice acting with English subtitles as superior, so this is a boon. “Cowboy Bebop’s” English cast is top-notch, and I am examining them in this article – they are my chosen versions of Spike, Jet, Faye and radical Edward.

As you may be aware, there is a live-action show of “Cowboy Bebop” which just wrapped up filming. While the idea of this makes me all kinds of nervous, it also reminds me of how great the original was. It also gives me an excuse to talk about it.

Now is the perfect time to re-examine the classic show and remember the voice actors brought these characters to life.

Spike is the main man aboard the Bebop. Fearless, witty, complex; these are all words that described this bounty hunter. Spike is also proficient in Jeet Kune Do, adopting a personal take on Bruce Lee’s seminal fighting style.

Spike is subdued, indifferent and cynical when he isn’t working, often pestering his crewmates with his carefree attitude. This personality is turned on its head when he is on the job, becoming energised and running headfirst into the heart of a conflict.

Spike’s motivations for going on jobs can be boiled down to two things: reward and excitement. He no longer fears death because he already ‘died once’, hence his penchant for death-defying acts. He is convinced that the life he leads is a dream, compounded by the fact that the past constantly haunts him through his artificial right eye. Challenging death is the only proof that he is even alive.

Although, in reality, he cares more than he is willing to admit. He often will forgo reward to do the right thing. He also profoundly appreciates his companions, even though he is unable to express it. He is undeniably complicated.

The nuances of this character’s personality are given form through his voice actor, Steve Blum. Blum is an industry veteran, lending his vocal cords to countless gaming, TV and film animation. He’s included in 2012’s Guinness Book of World Records for being the most prolific voice in gaming!

It is a guarantee that you have played or watched something featuring Steve Blum’s voice. While Blum has played Wolverine, Grunt from “Mass Effect,” and Zeb from “Star Wars: Rebels,” Spike is his most celebrated performance.

Steve Blum’s performance as Spike Spiegel holds a special place in his heart. He has cited this role as the one that instilled him with the confidence to pursue his voice acting career. Before this job, Blum was insecure about his lack of classical training. He learned to act, perform and grow when working on “Cowboy Bebop” which comes through vividly in the authenticity of his stellar work as part of the cast.

Steve Blum also has the waveform of Spike’s “Bang!” tattooed onto his arm. A permanent reminder of how important this role was.

Jet Black is the captain of the Bebop. A former officer in the Inter-Solar System Police (ISSP), Jet lost his left arm after being attacked by an assassin, so he has a cybernetic replacement.

He is the most mature of the crew, with the most patient demeanor. He’s generally accepting of the crew’s unpredictable and critical attitudes – taking on an almost-father figure place aboard the ship. He frequently cooks for everyone, despite the unfavorable reactions he garners through his cooking.

Underneath his gruff exterior, Jet is the most affectionate crew (not that the competition is too fierce), which is clear to see in his brotherly bond with Spike and his treatment of Ed and Ein.

Jet’s deep, heavy voice is the work of actor Beau Billingslea. Billingslea does not have the same degree of work under his belt as Blum, but he has featured in several high-profile live-action shows and movies.

Some of the content he has contributed to are “Star Trek: Into Darkness,” “Naruto Shippuden,” and the criminally under appreciated 1988 remake of “The Blob.”

One of the elements that Billingslea appreciates about Jet is his vulnerability. Commonly cast in the role of “macho, tough guy” he has the opportunity through Jet to show his vulnerable side. Jet’s demeanor suits his mentality, as he is a man who carries a lot of emotional baggage and complexity with him.

“Survival of the fittest is the law of nature. We deceive, or we are deceived, thus we flourish or perish. Nothing good ever happened to me when I trusted others. That is the lesson.”

Faye Valentine is a character outside of her own time. Raised on Earth before the gateway incident that ravaged the planet, Faye’s past is mostly a mystery. It is known that she was severely injured and frozen for more than half a century.

Once awoken, she was betrayed by the clinic’s doctors, forcing her to accrue substantial debt. Rather than pay, she decided to become an outlaw and bounty hunter. Being betrayed by the first people she met has moulded her personality into one colder and more cynical.

While technically 77, Faye has the appearance and abilities of a 23-year-old woman, so she can certainly hold her own against anyone she encounters. After various run-ins with the Bebop, she joins the crew – with Spike and Jet reluctantly keeping her around.

Her relationships with the crew are tense. She butts heads consistently with both men on board, although they all fit together nicely underneath the tension. Her relationship with Spike is particularly complicated. According to the show director Shinichiro Watanabe, the two do nothing but bicker, but the two characters like each other a lot.

Faye is voiced by Wendee Lee – a voice actor with a long history in video games and anime back to 1985.

Lee is interested in Faye as a character, particularly the complexity she hides beneath her projected self. Her vulnerability is in her longingness for somewhere to belong.

However, she still is a powerful and strong female character, something that Lee holds Faye’s character in high regard for. The wit, charisma, and competence that Faye Valentine embodies are attractive to Lee. She feels a genuine connection with her work as Faye and can naturally fall back into the role.

Wendee Lee is incredibly proud that the English dub of “Cowboy Bebop” is so beloved, even outshining the Japanese dub, an uncommon occurrence in anime.

Edward Wong Hau Pepelu Tivruski IV (whew, try saying that five times fast) is undoubtedly a standout character among the Bebop crew. By this, I mean that Radical Edward is not some sad, depressed, stoic entity. Ed is the exact opposite of the rest of the cast; upbeat and happy. Ed is a kid and a peculiar kid to boot.

Regardless of her age, Edward is one of the galaxy’s foremost hackers. She bargains her way onto the Bebop to become one of the crew. The group would be lost without radical Ed, who provides all the technological support on the jobs. When the rest of the Bebop are interested in the bounty, Ed is simply happy to be there.

Ed’s relationship with the rest of the crew is relatively steady. Ed is mainly treated as an annoyance, primarily due to the gang’s hang-ups about having a kid around. Ed chooses to form a close bond with Ein, the data-dog (well, a Corgi, to be precise). These two are arguably the closest characters on the ship.

Edward’s unique cheerful attitude differentiates her from everyone else. She, too, has been abandoned on Earth by her Dad, but she doesn’t let that get her down. It is rare for Ed to feel upset about anything. She rolls with the punches.

Melissa Fahn‘s performance as Edward is one that came naturally to her. She describes Ed as full of life, which informed Fahn’s direction with the character’s voice. The many great quirks to Ed’s speech can be traced back to Melissa Fahn herself.

She was given a lot of creative control by voice director Mary Elizabeth McGlynn (who happens to be married to Steve Blum) to create Ed’s personality to make it as weird as she liked, which is no doubt why Ed is such a wonder to behold. Watanabe described Ed as Like a cat out of control.

It is hard to imagine another voice actor performing the role of Ed as well as Melissa Fahn. The character’s craziness is so unique that it is impossible to image her voiced by anyone else.

Melissa Fahn is also a singer! She released an album called “Avignon” in 2007.

So that is the crew of the Bebop and their voices. If you have anything you want to share about the characters, feel free to do so below! It is a wonderful show, totally worth a watch or replay.

Michael Sum is a writer for online voice actor agency Voquent.com casting professional voices for game and animation projects in any language or accent.

The love that Michael has for Metal Gear Solid will never be satiated. He finds his kicks from analysing the media content that he enjoys, until he is almost sick of looking at it. He will try to convince you it is to understand it on a deeper level, not obsession.

Is It Possible To Stay In Touch with Your Patients and Staff Using Texting?