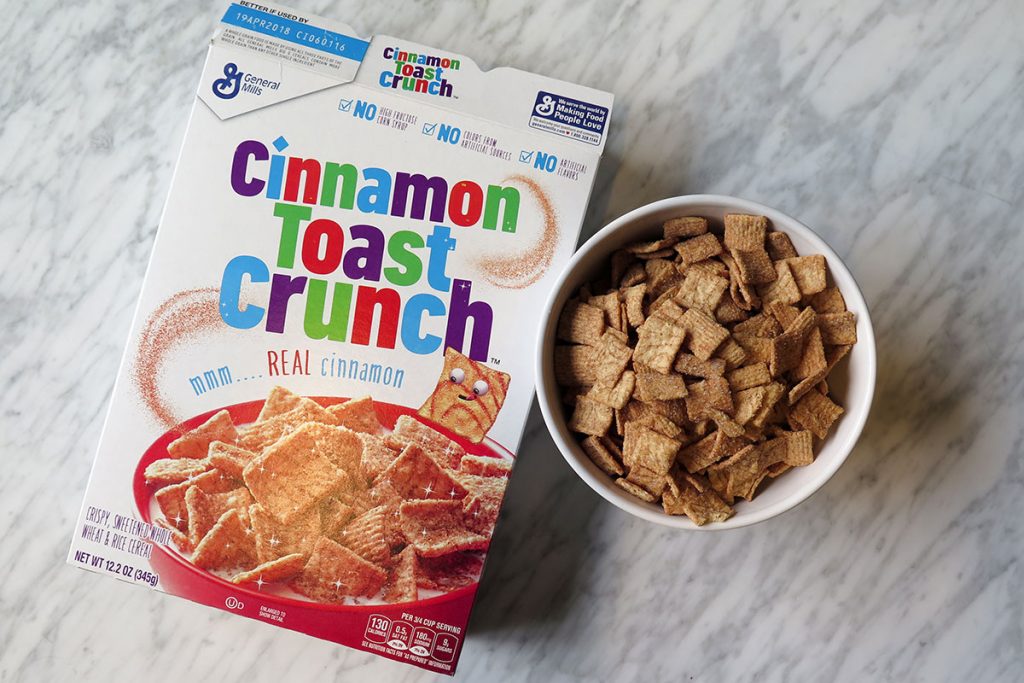 Cinnamon Toast Crunch? More like, Shrimpamon Toast Crunch!!! Eh? EH!?? No, but seriously, this is gross enough to where if you’re presently eating something, you may want to take a break for a moment. During the course of the day on March 22nd, author and podcast host Jensen Karp took to Twitter to post about a supposed discovery he’d made in his breakfast cereal.

Disgusting as it may seem, it would appear Karp discovered two discarded shrimp tails in his box of Cinnamon Toast Crunch. Karp made sure to point out that this was not meant as some sort of joke, even though some of his replies afterward were certainly jocular in nature.

The official Cinnamon Toast Crunch account responded back sincerely, though Karp and others seemed to think the explanation provided was laughable.

The official explanation of “an accumulation of the cinnamon sugar that sometimes can occur when ingredients aren’t thoroughly blended” could be plausible if it weren’t for just how much the foreign objects actually do resemble shrimp tails, and how highly unlikely it would be for two different cinnamon sugar accumulations to take on similar forms. If one clump looked like a shrimp tail and another like the face of James Spader, maybe we’d be having a different discussion right now.

Karp would disclose in a screenshot of a direct message exchange with the Cinnamon Toast Crunch account that they’re requesting he send in the foreign objects he found for further examination.

Karp seems to be taking all of this in stride and decently good-humor but it doesn’t make the whole situation itself any easier to stomach. Pun initially not intended, but in retrospect, totally intended.

The idea of finding foreign objects in food is ghastly. If you’re squeamish, do yourself a favor and never look up ANYTHING online about what things people have found in food before. To go even further, you don’t even want to know what the FDA allows within its acceptable guidelines to be found in food products. But if you are interested, here’s a nice little link from their official website. Just wait until you get to the part about asparagus beetles.

In all seriousness though, as rare as issues like these are, they are extremely unsettling when they do come up. Companies, for the most part, do try to treat these incidents with the severity that they deserve. As an example for something even lesser in nature to this, I received a free 12-pack of Diet Coke when I tweeted about how one of the cans in my 12-pack was completely empty despite being fully sealed with no puncture marks. The company asked me to DM them, they apologized, sent me a coupon for a free 12-pack, and that was that.

It’s because of this level of seriousness that it’s highly doubtful Karp is making this up. He pointed out other things that he allegedly found in the box along with the “shrimp tails” including string, a pea shaped object, and pieces of cereal with odd black marks on them.

In fairness to the official explanation that Cinnamon Toast Crunch provided, the “pea” like object and black marks could far more plausibly be a result of the cooking and partially unmixed ingredients process. But combine that with the other things allegedly found in the cereal box and… well… let’s just say we wouldn’t take our chances eating anything from that box no matter how normal it looked.

If you still have your appetite after reading this far, you are made of strong stuff than most. That or the idea of shrimp in your cereal is far more appealing to you than most. Here’s hoping that Karp gets an explanation as to what could’ve happened to cause this. Here’s also hoping that if there is an explanation it isn’t even more disgusting than what we’ve already seen.