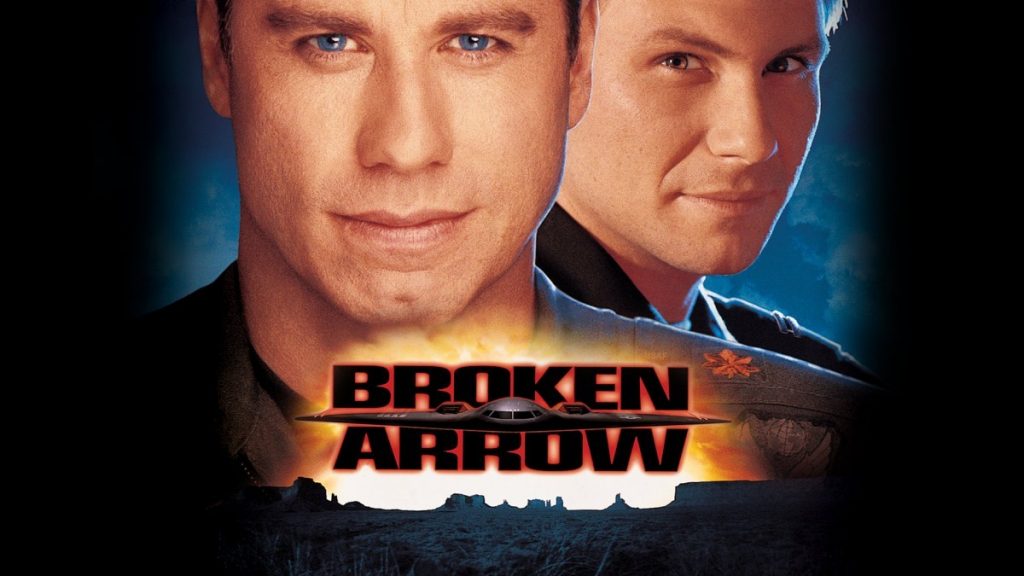 I say this all the time, but so many of these types of action films are wholly defined by the culture of the time, specifically 90s. “Broken Arrow” checks all the boxes on every 90s action card. From the director to the plot, to the action set pieces to the cast embodying archetypes, the movie is unwavering in its devotion to 90s action tropes.

This isn’t a good or bad thing, rather it is just a fact that provides the lens with which we view it 25 years later. “Broken Arrow” neither adds or subtracts from its own genre, simply being another entry into the overcrowded shelf of 90s action that works if you’re into it but stretches beyond its means if you’re not.

Directed by action auteur John Woo, “Broken Arrow” runs the gambit of just about every action plot point there is. A disgruntled Air Force Major Vic “Deak” Deacon hijacks some nukes on a routine mission which sets the pentagon into the classic board room “what do we do now?” and of course, his protege Captain Richard Hale survives the crash and sets off in pursuit of Deaks to disrupt his plans. No 90s action film would be complete without the in over her head but also kind of bad ass damsel/love interest, and for that we get Park Ranger Terry Mathis. Whoever you think she is when you read that description, you’re right.

Stuff happens, things get blown up, our heroes and villains continuously defy the laws of physics, and the plot falls apart pretty quickly if you think about it too hard. But I don’t hold any of this against “Broken Arrow,” because it is exactly what actions films were at the time. They almost always pitted an aging or comeback veteran (in this case John Travolta) against a young, unlikely hotshot Hollywood felt the need to try desperately to make an action star (Christian Slater). There was about a 4 or 5 year stint of this; rinse and repeat, same story different faces, and generally same result in that no one really panned out the way they intended.

Slater, like Nicolas Cage, The Bladwins (yes, all of them), even Denzel Washington. Sure, the argument can be that people like Denzel, Reeves, and even Will Smith all ended up being about to become action hero darlings in their own right, they don’t define 90s action the way the veterans do, and most certainly do not stand as the new crop of today in the same regard. Yes, even including things like “John Wick.” Everyone quickly forgets that until someone killed his dog, the majority of us wrote off Keanu Reeves as an unwatchable, one note character actor. I’ve championed him since 1994, and never wavered, so ya, those of us who never let go remember. Pepperidge Farm remembers.

None of this has anything to do with “Broken Arrow” directly, except maybe to touch on the idea of Christian Slater being pawned off as a big budget Hollywood action star is about as believable as Keanu Reeves winning back the hearts of millions after 20 years of being shit on. And yet, 90s action movies like “Broken Arrow” all have this in common. Sometimes it works, sometimes it doesn’t. Here, it just kind of exists. Slater is propped up more by the overacting, scene chewing Travolta than any of his own merits. For Travolta’s part, I actually really enjoy him in this type of role. That smug, self assured, manic, over the top villain just suits him so damn well he’s easily the best part of the film. He’s so delightful and relishes in these kind of roles you almost always find yourself somewhat rooting for him a little bit. Sure, he’s a bad guy, but he’s just so good at being bad you kind of don’t want it to end.

Outside of Travolta, everyone else is replaceable and expendable. They simply fill roles necessary to round out the 90s action roster, with little regard to their necessity to the overall narrative. It is without a doubt, an American John Woo film. The only thing that is missing sadly is doves. Not entirely sure how he found a way to cram them into “Face/Off” but not into the deserts of “Broken Arrow.” Birds aside, it has planes, trains, and automobiles, and boats just to round out the portfolio. It all explodes over and over again, with each line of dialogue acting as filler to the next thing to blow up.

And all of this is fine if it’s your cup of tea. As far as 90s action movies go, “Broken Arrow” is just interesting enough to be enjoyable. It doesn’t make the case to stand on its own, but the in grand scheme of cultural paradigms, it serves its purpose. “Broken Arrow” most certainly drags on much longer than it should, with the third act cramming in not one, not two, but 3 separate face offs, each one feeling like it should be the end of the movie but instead just keeps going to the point of boredom.

If you’re in the mood for some John Woo explosions with Travolta shouldering the film with over the top villainy, then “Broken Arrow” is for you.