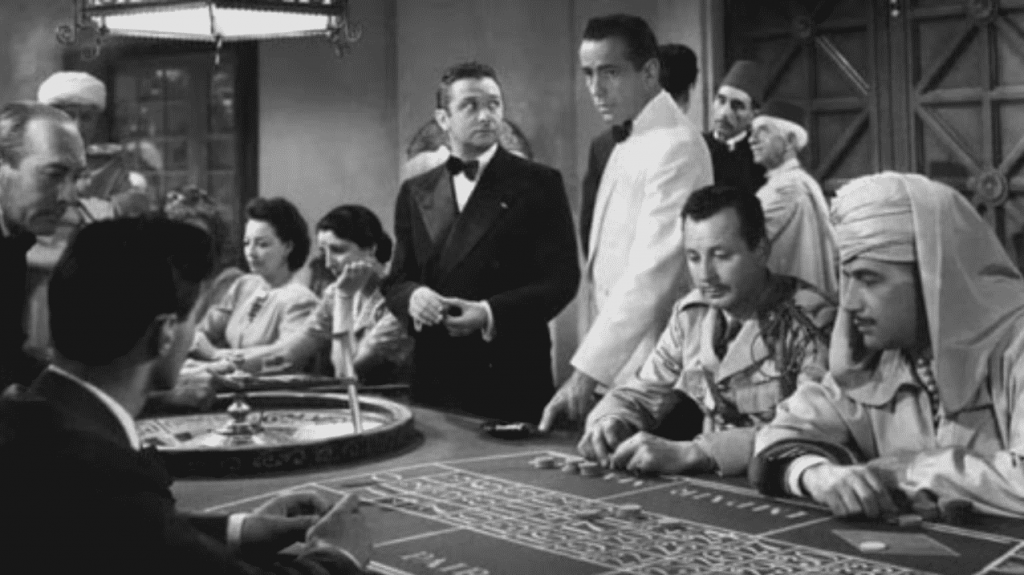 Gambling has been around since the dawn of time it seems with ancient scrolls talking of dice games in India as far back as 2000BC and China in 1900BC. Man has always liked to gamble and whether it is legalised or criminalised as it has been in the past and in some regions and countries today people will always find ways to play games for money.

Hollywood and television have a rich history of using gambling and casinos in their productions. Wild West movies often depict cowboys pulling their guns over a game of cards, James Bond is no stranger to the baccarat table and even Mr Bean has been known to enjoy the slot machines.

Maybe it is the glamour of the casino or the links to the Mafia or just human nature to gamble, Hollywood has created some memorable movies and scenes based around casinos and gambling. Here are some of the best but be aware there are spoilers involved.

No list would be complete without naming Casablanca. The casino game in question is roulette and although it involves a big win but not in the usual way. Rick helps the love of his life even though he knows it means she will leave with her husband and he will never be with her. While Jan, the husband, is trying and failing to win enough money to leave Rick approaches him and tells him to play 22 on the roulette wheel. He also makes it clear to the croupier that 22 is the number being played. Rick had tampered with the wheel so that his love could get the money she needed and his self sacrifice means Lisa and Jan can leave Morocco safely.

This whole movie is about a group of students from MIT who back in the 90’s took Vegas by storm. Based on a true story with some embellishments it tells of the exploits of a gang of card counters. Highly organised, trained and intelligent they take on the big casinos and win. And lose. Over one weekend they make $400,000 and one player has stated that personally he made around $2 during the years they were playing. It ended with them being banned from casinos all over and the team being disbanded after a poor run resulted in losses.

This James Bond hit featured an incredible looking casino called the Golden Dragon Casino and was based in Macau. Many people after watching the movie wanted to visit this gambling establishment only to find it was non-existent. All the filming for Macau and the casino was actually done in England at Pinewood Studios.

The start of the scene has Bond slowly moving toward the casino in a small river boat which then goes through the mouth of a Chinese dragon (because, why not?) before he enters the casino itself which is full of shadowy gamblers and villains.

Casino Royale should never be ignored as the whole movie is one casino scene after the other and all of them entertaining.

This is another casino movie that is based on true events. Based around the life of Frank ‘Lefty’ Rosenthal who managed several casinos for the Mafia back in the 1970’s and 80’s. This film is shot beautifully and really captures the glamour of casinos back then. Going to a casino then was a reason to dress up and the suits and dresses in the movie show the lifestyle being lived by some of the gamblers or at least the lifestyle they aspired to.

It is also probably the most violent movie involving casinos as the story does not shy away from the Mob related behaviour in Las Vegas at the time. The MIT gang from 21 can be happy they never card counted at one of Frank Rosenthal’s casinos. These days Vegas is operating at a limited capacity due to Covid-19 and hopefully will soon return to it’s normal service (without the Mob) but online casinos can offer a fun way to play poker or other games and if you are a new player you may get a casino bonus too.

In this movie Charlie (Tom Cruise) discovers he has a brother he knew nothing about and that his estranged father has left all his money to look after him. Charlie hatches a plan to take Raymond (who is an autistic savant) away from the hospital to try and force them to split the money with him. As the film goes on the unlikeable Charlie starts to understand Raymond more and discovers much about him but towards the end of the movie Charlie is in debt and his girlfriend has walked out over his treatment of Raymond. Charlie hatches a plan. Las Vegas.

Raymond who has never been to a casino before looks confused and befuddled. Charlie, who has realised that Raymond is literally a walking calculator, leads him to the blackjack table where, you guessed it, they win big. Raymond’s ability to count cards from a six deck shoe brings the cash needed for Charlie to repair his life and the two finally bond as brothers.

This movie is the epitome of ‘what happens in Vegas, stays in Vegas’. Alan is a walking disaster who causes his friends nothing but problems from the moment he accidently drugs them to stealing Mike Tyson’s tiger and kidnapping a gangster named Mr Chow. In between all the mayhem they have also managed to lose their friend Doug who’s bachelor weekend they are attending. Mr Chow says that Alan stole his $80,000 of casino chips and has Doug. Alan has no knowledge of the chips but decides that he can win it back at the casino.

As the group were driving toward Las Vegas earlier in the movie Alan could be seen reading a book on blackjack and card counting. He now believes himself to be a mathematical genius. Against everything else that Alan manages to do in the movie he actually pulls this off and he wins hand after hand to recoup the money for Chow.

There are many more wonderful casino and gambling movies out there like The Gambler, Croupier, The Sting, Swingers and Ocean’s Eleven that can keep you entertained but if you prefer playing for real then there are lots of online casinos that are easy to access. They offer games like poker, roulette, reactoonz and other slot games. Then you can pretend you are in your own movie playing against hardened pros.