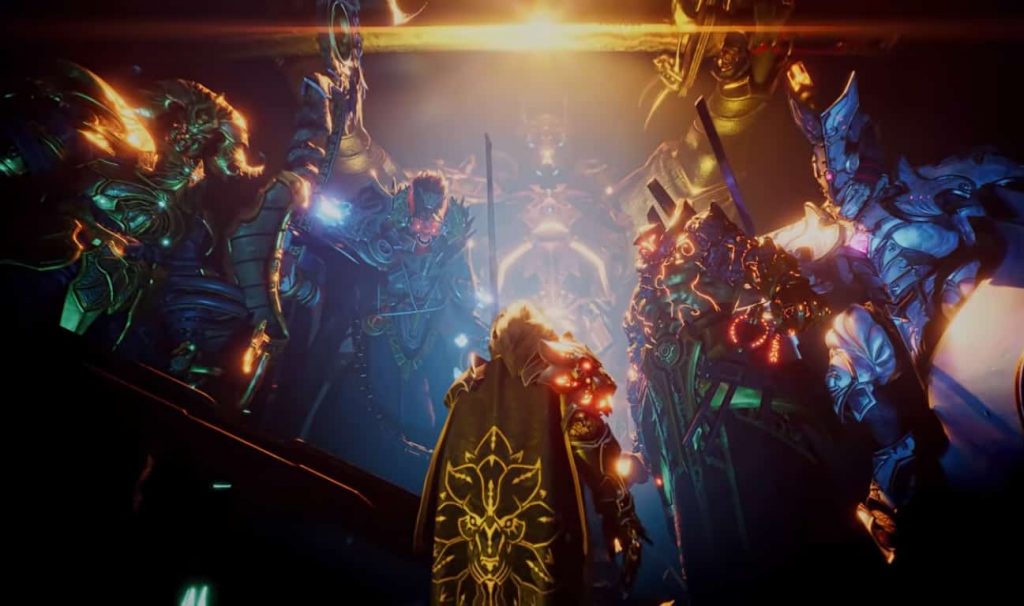 You live in the world of Aperion. It’s a fantastical world made up of four realms- earth, water, air and fire. Each realm offers its own breathtaking landscapes and dangerous creatues. However, your home is in serious danger. As Orin, a Valorian Knight, it is your responsibility to protect the realms by taking down your brother Marcos. His goal? To obtain enough power to ascend to godhood. That’s right, you need to challenge a god.

Although the premise of “Godfall” is certainly interesting, the story itself falls flat rather quickly. I think there are two main reasons for this: the characters and the world building. Overall, the characters are not especially interesting or unique. Orin is a fairly standard, gruff-talking hero type. Throughout his journey, he encounters friends and foes whose significance to the plot is superficial at best. None of these characters stand out. After all, their personalities don’t need to be fleshed out. This is a story about Orin’s journey, everyone else is simply a set piece.

In terms of world building, “Godfall” is very much a story told within the game’s documents. Similar to titles such as “Destiny,” the game’s lore and details all require you to read through massive amounts of text. While the landscapes are beautiful, you will know virtually nothing about them unless you search for the information. Godfall” is a simplistic tale of stopping an unspeakable evil. It’s a tried and true formula in storytelling, but rather disappointing when you consider the potential behind the world. “Godfall” could have been a brilliant story, but there just isn’t enough story to make it happen.

However, the thin story doesn’t mean this game is a waste of time. As a Valorian Kinght, Orin can craft and wear any of twelve unique Zodiac-inspired armor sets known as Valorplates. Each set offers unique bonuses that favor a particular combat style. For instance, the Valorplate known as Vertigo resembles a giant moth. Wearing this set will allow your attacks to deal air damage and give you a chance to inflict shock. As you encounter various enemies, you can return to your base and switch to whatever armor set will best help you defeat your foes.

Combat doesn’t stop at what armor you select though. In fact, this game truly shines in terms of combat. Fighting feels good in this game. Whether you glide past enemies with the long sword or push all your strength into hammer blows, you feel good while doing it. It’s also challenging. You need to learn your move sets and skills intimately. Effectively dodging and parrying enemies is critcial to keeping the upper hand in fights. If you don’t go into a fight with a clear head, you’ll likely find yourself respawning rather quickly.

As a melee-looter, I think the game offers a decent amount of loot diversity. Like many looters, you have five types of loot rarity-common, uncommon, rare, epic and legendary. You will obtain loot from all weapon types regardless of what weapons you primarily use. Gear is easy to uprgade and equip. While none of the gear is genre-defining, it serves its purpose and looks pretty cool to wield. Thankfully, you can break down anything you don’t need and use the materials for things you actually want.

Overall, “Godfall” is actually a rather fun title. It doesn’t tell some epic mind-blowing tale, but it does offer a fun and challenging adventure. So while I can’t help but wish Orin’s story had more substance, I can appreciate the pure joy of killing monsters in cool armor.