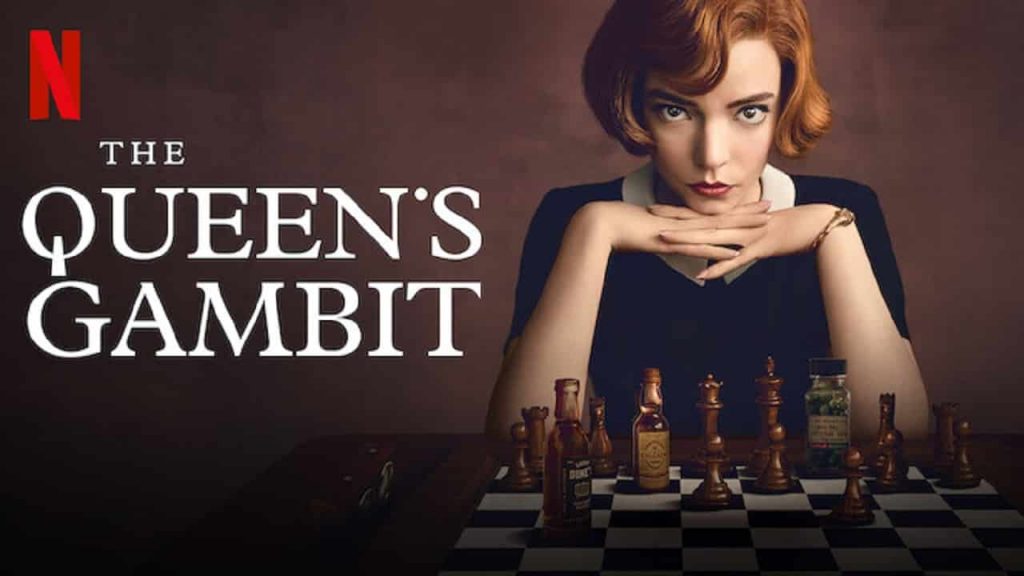 As a reviewer, we talk a lot about balance. Films are often critiqued on their themes and how well they handle their prominent ones or how well they juggle multiple. “The Queen’s Gambit” is one of a kind accomplishment in that it not only deals with numerous, complicated themes but balances them all with almost flawless perfection. On paper, you’d be hard pressed to believe that a story about a young woman striving to become a chess champion in the 1960s would be interesting to anyone, let alone thrilling. But with its stunning visuals, beautiful storytelling, and top notch performances, “The Queen’s Gambit” manages to become one of the best drama series Netflix has to offer.

Based on the novel by Walter Tevis of the same name, “The Queen’s Gambit” is a fictional story of chess prodigy Beth Harmon, a young orphan girl who discovers a proclivity for the game and her pursuit to become a world champion in a predominantly male sport. Though incredibly gifted, she is also a young woman who struggles with letting people get close to her as well as addiction to pills and alcohol. As we follow Harmon’s life throughout the years, we discover that her journey to the top may be her greatest triumph or end up being her downfall.

Two things need to be clear before we get into the review of the series. One, I don’t play chess. I know how to play the game, but I certainly don’t possess any additional knowledge or experience that could help inform the chess jargon used in “The Queen’s Gambit.” This also doesn’t allow me to speak to the accuracy or inaccuracies of the game as it is portrayed in the series.

And second, I have not read the book, so I am unable to speak on the differences and/or similarities. What makes “The Queen’s Gambit” so compelling is that neither of these things are necessary to be fully invested in the characters and story. I’ve actually watched the entire 7 part series twice in 3 days. Yes, it’s that good.

Written for the screen by Scott Frank and Allan Scott and directed by Scott Frank, there is a true mastery of story telling and world building unmatched in most drama series today. Frank demonstrates an incredible vision behind the camera, tackling themes like addiction, loneliness, family, sports competition, obsession, coming of age, and tragedy all into one series. It is so seamless it’s hard to believe it’s packed into only 7 episodes. I can’t remember a series that handles so much so perfectly. My praise may be a little too hefty, as the show isn’t completely flawless, but for whatever it lacks, it makes up for with a story and character that is truly special. “The Queen’s Gambit” somehow makes chess exciting, so much so in fact that every game Harmon plays will have you leaning forward in anticipation of what comes next.

In addition to its storytelling brilliance, “The Queen’s Gambit” is beautiful to look at it. Everything from its stylization of the time period to its fashion to even its music all tell a story in their own right. Everything in the series has a purpose, and the cinematography is gorgeous. The visuals engrosses viewers into the world, and composer Carlos Rafael Rivera sparks layered lift into every match and scene. “The Queen’s Gambit” is a complete vision, like a clock that has every clog and wheel working together in perfect harmony.

Adding yet another layer to an already brilliant series is the acting. Anya Taylor Joy is a powerhouse as Beth Harmon. She is truly a wonder to behold, and is the centerpiece of “The Queen’s Gambit.” Not just because she’s the titular character, but because of the complexity she is able to convey with every glance and spoken word. Harmon is a troubled girl who is becoming a woman alone. She is obsessive, angry, witty, lonely, confident and at times tragic.

Anya Taylor Joy gives perhaps one of the most layered performance of her already successful career, and demands emotional investment from the viewer with every captivating moment. The rest of the supporting cast is great as well, but it’s Joy who is the true lynchpin of the series.

“The Queen’s Gambit” may not be something you initially gravitate towards. You’d be forgiven for seeing the description about a girl who plays chess and immediately scroll past it. But regardless of how you feel about the game, moving past this is a mistake.

The series is truly compelling and thrilling, in ways you didn’t think were possible for a game, let’s face it, most of us don’t play or understand. It actually channels some of the best parts of “Good Will Hunting,” drawing from its emotion and tragedy of a gifted by flawed protagonist seeking a place to belong in a world that doesn’t seem to want them.

I can’t stress this is enough: “The Queen’s Gambit” is terrific. In a time where we need to find something to distract us from the outside, the show gives us someone to root for. Not just because they are inevitably the hero, but because that hero is as flawed and complex as we are despite their gifted ability to play a game many of us don’t understand. By the end, it will have you cheering for Harmon, and raising your fist in the air with triumph whenever she makes a king fall over. When was the last time you watched a series that made you fist pump for a chess match? That is the magic of the series, and why I can’t recommend it enough. It’s best to resign the old fashion way, topple your king and succumb to the show’s power.

Olivia Newton-John, Star of “Greece” and “Xanadu”, Passes Away at 73