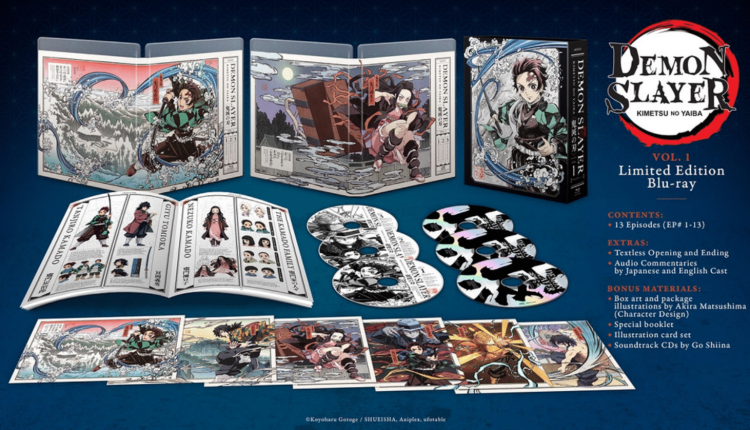 “Demon Slayer” Blu-Ray Box Set is to Die For

I think that it’s pretty obvious that I’m a total” Demon Slayer” fan when you talk to me. Whether it be collecting the figures or the manga and keeping up with the story, I’m in it for life. The story that was created by Koyoharu Gotouge is one that will pull you in after watching the first few episodes. And the best thing yet is the new blu-ray box set that Aniplex has put together for the fans.

The box set not only comes with the first 13 episodes of the anime both subbed and dubbed, but also comes with three CD’s of the soundtrack. That means that you can take it with you in the car when you’re out driving to the next anime convention in cosplay as either Tanjiro or Nezuko. Granted that won’t be for a while, but it does make it a little cooler having the official soundtrack blasting.

The runtime on the discs is 325 minutes, so you get 5.4 hours of content to watch and share with your friends. And believe me this is one of those anime that if your friends haven’t seen it, you’re going to want to share it with them. As bonus content on the disc you get a textless opening and ending, audio commentaries from both the Japanese and English cast. And the Japanese cast commentary includes subtitles so that you can read what you don’t understand them saying.

The box art on the box itself is really nice. Plus like other sets you have the option to flip the DVD covers over and with the “Demon Slayer” set it converts to a nice plain black cover with white text on the spine. I actually prefer the black cover and white text because when put on the shelf with the other DVDs.

The bonus items are quite nice as well. You get a booklet with art of the characters and scene design along with staff commentaries. And you get a special pack of cards with characters that are pretty enough to frame.

If you’re interested in picking up the set for yourself or for a die hard fan of a friend you can do so by clicking the link here. It’s definitely worth the investment.