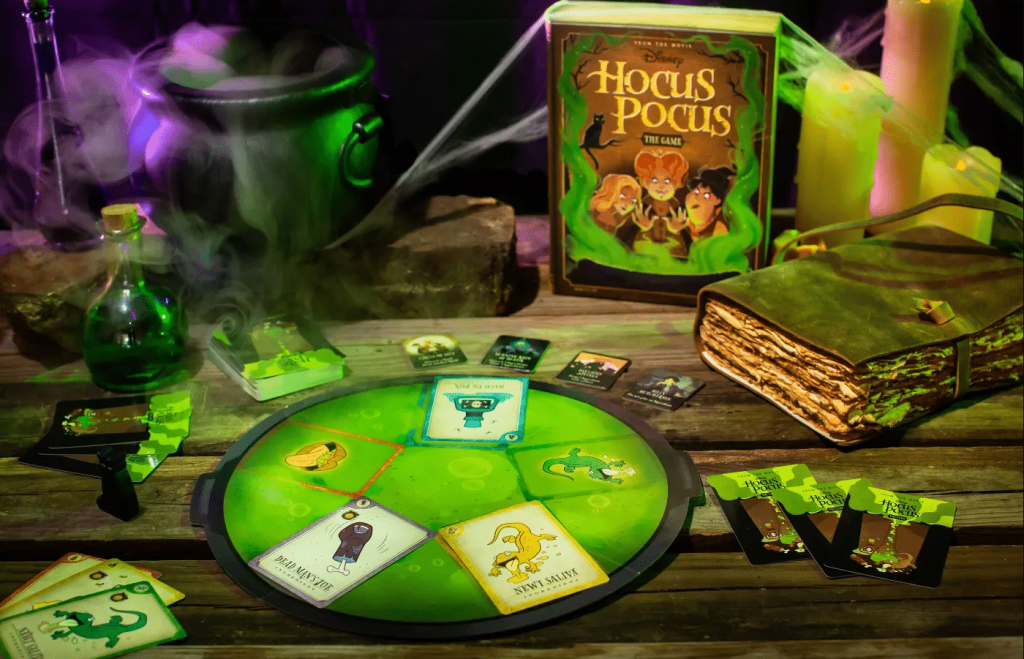 A new board game based on the classic Halloween movie “Hocus Pocus” has been found at Target. While we may not be able to have huge get togethers this Halloween we can at least have a few people over. And what better way to celebrate than with a good movie and a board game?

The Black Flame Candle has been lit!
Now the Sanderson witches you must outwit;
or with a wretched evil potion,
a foul spell they’ll set in motion.
Stun the witches and ruin the brew
before the sun can rise anew!

Work together to protect Salem’s children and stop the Sanderson sisters from completing their wicked potion before the sun rises!

Playing Disney Hocus Pocus: The Game
In Disney Hocus Pocus: The Game, you’ll work together to ruin the Sanderson Witches’ potion three times before the sun rises. Hold a hand of ingredients—like purple Newt Saliva or blue Oil of Boil—and attempt to match all the ingredients or colors within the cauldron. Each turn, you’ll ask a question about other players’ hands. The witches’ spell is strong, though, and you can only as about the color or kind of ingredient! Then, you’ll play a card from their hand into the cauldron and draw back up to three cards.

Some ingredient cards have Binx or a spell book on them. Binx allows one player to lay their cards down so everyone can see them. This makes it easier for players to strategize. The cards stay there until Binx is moved. If a spell book is played, Winifred, Sarah, or Mary cast a spell! Draw a card from the Spell deck and do what it says. Spells generally do something to ruin your plans.

Players also have four “Tricks” to use; each Trick can be used once per game. Use Billy Butcherson, the Burning Rain of Death, a Circle of Salt, or Daylight Savings to help you along the way!

Target is selling this for $19.99 and 2-6 players can enjoy the game. Pick one up now before they sell out. Because surely with a fandom this strong they’re going to go fast!