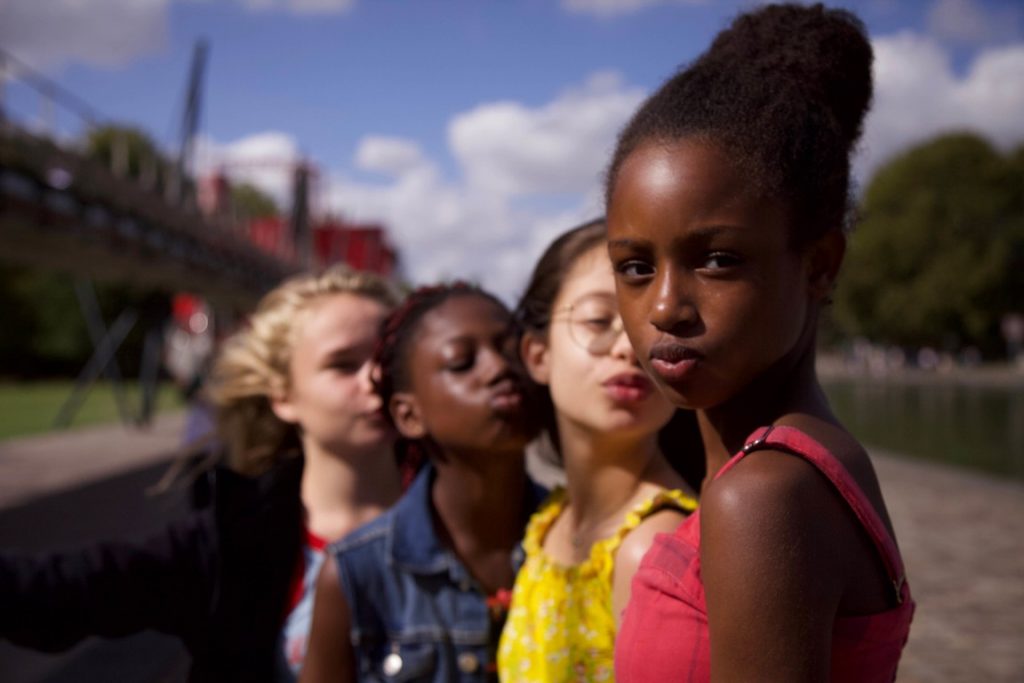 It’s infrequent that a film comes along with as much pre-release furor as Netflix’s recent “Cuties.” If you’ve heard about it online, you’ve likely heard one or more of the following: it promotes pedophilia, it’s a documentary, there’s underage nudity, and there’s 11-year olds performing sex acts on themselves and/or others. None of those are the case. That said, it’s a very raw and unsettling look at what these particular young girls believe to be the path to success and popularity.

So, let’s kick off with what the film is about – it follows Amy Diop (Fathia Youssouf), an eleven-year-old Senegalese immigrant living in France with her conservative-Muslim family. The family is awaiting the return of her father, who it turns out has gone to marry a second wife and bring her back to France. Amy who is already isolated by the strict cultural dogma which she is surrounded with, rebels in protest for what she feels is the marginalization of her mother. She sees another girl who she goes to school with, practicing hip-hop dancing. She manages to get her way into that girls friend group and they decide that one way to become famous and popular is to emulate the kind of provocative dancing being done by the older girls. They decide to enter a dance competition to further up their status and they dial their efforts up, far beyond what would be remotely age-appropriate.

Points to take away from the description is that there are no adults (or even older children) encouraging them to be sexy or to play up the twerking. In fact, in each moment of adults encountering the girls, they deride them for their actions. Even as the film gets to its contest performance finale, it doesn’t go at all the way films usually do (read: it doesn’t go well for the girls), because they do go over the top by a country mile.

The film absolutely is a manifesto about how young girls are over-exposed to hyper-sexualized content, and it is expressed to them as being expected of them and the path to popularity and follower counts on Instagram. They are fed waves of those signals, and without any other input to tell them otherwise, they may well run right off the rails. The film does not celebrate their actions in any way, if anything it leads to the girls downfalls and derision.

There have been other films in recent years which are excellent that speak to the mix-signals given to underage girls in particular, such as “Eighth Grade,” however even then when Kayla (Elsie Fisher) gets herself into trouble by sexing it up, it’s handled gently. In “Cuties,” there’s nothing gentle about it. It’s like 2002’s “Irréversible” or 1986’s “Henry: Portrait of A Serial Killer” – they are intended to induce shock and revulsion.

Yes, sure, there will likely be a few pedos out there who see “Cuties,” and add it to their fantasy collection of films, just as there are those who take the others above as helpful guides in their own predilections. However for the main body of audience, the point of the film is in no way titillating – it’s to strive to point out that what an orthodox family (of any religion), which doesn’t give children any guidelines or moral grounding beyond “don’t do anything” and that child is adrift in the myriad mixed signals of the modern world (especially as it relates to social media and online followers-equating-to-self-worth) they can latch onto the wrong things.

The above said, Netflix did itself no favors by changing it’s original French/Sundance release poster showcasing the main girls frolicking over a hill to one with the girls in their dance uniforms all in the hyper-sexual poses. That was a disservice both to the film and to its underlying message. They deserved to be called on the carpet for missing the moral of their own film.

On the topic of the film itself, it’s not a bad film: the performances are solid, especially from a collection of such young girls. The pacing is slow, and there’s a bit too much done around Amy’s home and family. First time writer/director Maïmouna Doucouré wanted to showcase her own experiences growing up, and it is evidenced in the nuances around the interactions between the family and their wider tribal circle. You can tell the points she is drawing from her own experiences, because those are the areas she imbues with the levels of reality that give the textures, then the others are drawn with a more generic brush.

The fact that the girls never get particularly good at the dancing, causing them to reach further and further across the line of age-appropriate behavior, speaks to the brutal sincerity of the situation they’re in. However, non of the character do we ever really connect with; we follow Amy’s story, but she’s a very damaged little girl, and hard to connect with her plight, at home or at school.

It’s hard to say who this film is best suited for, ideally it would be for kids to watch with their parents who can have a conversation with them to talk about how the messages of peer groups (and social media in particular) can be inappropriate and/or inaccurate. However it’ll be a hard sell for many parents to have those conversations with their kids. Even now it’s interesting to watch the dichotomy between the critics ratings (just shy of 90% fresh on RT) and the audience ratings (11%) – I expect that few of the audience members have actually watched it.

Its morality message is going to be largely lost in many cases because of how unsettling and jarring it is to see these very young girls decide that this is how the judges and the world at large wants to see them act. It’s not comfortable to watch, and that’s entirely the point. It’s not meant to be comfortable, or easy, it’s meant to be remembered. And as a gauge of art, it succeeds, however a bit more moderation might not have hurt much, either.

“Cuties” is currently streaming via Netflix.